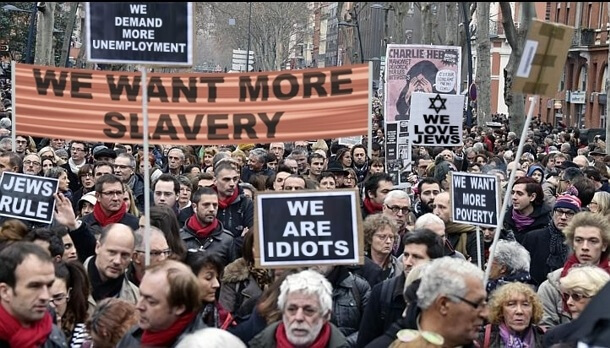 Jews are an infinitesimal percentage of Europe’s population, but continue to play an outsized role in the European imagination.

Old tropes about Jews have been given new life, as Jews are believed to have “too much influence” in the media and politics by 20 percent of respondents, while one-third know nothing whatsoever about the Holocaust, the systematic murder of six million European Jews.

Europe is not new to the challenge of anti-Semitism. Indeed, it has been part of the European landscape for nearly two millennia, taking many forms – religious, racial, political – and resulting in the introduction of ghettos, pogroms, forced conversions, inquisitions, expulsions, and, ultimately, the Nazi Final Solution.

At the American Jewish Committee (AJC), we began sounding the alarm in 2001, when we saw first-hand a resurgence of anti-Semitism, at the time particularly in some Western European countries.

We identified three main sources: i) far-right, populist, Holocaust-denying, ethno-nationalist anti-Semitism; ii) far-left campaigns not simply to criticize Israeli policy, but rather to delegitimize Israel and to single out Israel, the world’s only Jewish-majority state, among all the countries on the planet for targeted boycotts and sanctions; and (iii) Islamists, reflecting a slice of the larger Muslim migration to Europe, who brought with them a hatred of Jews as “infidels,” “sons of monkeys and pigs,” and supporters of the despised “Zionist entity.”

The challenge became how to convince European political leaders to acknowledge and confront the threats. After all, anti-Semitism, we contended, should not be viewed as a “Jewish problem,” but rather a danger to Europe’s postwar commitment to the protection of human dignity and the preservation of democratic values. What was required was not simply a response by Jewish communities to defend themselves, even as many began devoting substantial funds to basic security measures, but rather the power of government to focus on everything from education to security, law-enforcement to integration.

Yet, on the whole, Europe was painfully slow to wake up to the growing menace of anti-Semitism and to the increasing unease of European Jews, some of whom began wondering if they had a secure future or needed to consider emigrating to Israel or elsewhere.

I recall several AJC meetings with French President Jacques Chirac in the early 2000s. When we raised these issues, his usual response was: “My friends, I know my country better than you. There is no problem of anti-Semitism in France.” How wrong he was.

The problem was, and is, anti-Semitism, when Jews are targeted as Jews. Indeed, as many as 12 French Jews have been killed in recent years for the simple “crime” of being Jews – all, by the way, by jihadists.

And Jews have also been killed in Belgium, Bulgaria, and Denmark, again by jihadists, as well as targeted in other countries, from Germany to Sweden, Hungary to Poland.

First, it is impossible to combat anti-Semitism if some leaders still refuse to admit its existence – if, like Swedish Prime Minister Stefan Löfven, they are unwilling to deal with its specificity, instead submerging it, as we heard, under every “ism” and “phobia” known to humankind. Who better than Europe should understand where anti-Semitism can lead?

Third, what is the utility of European leaders mourning Jews murdered in the Holocaust, itself unknown to increasing numbers of Europeans, while failing to link the lessons of the Holocaust to living Jews?

Fourth, only six of 28 EU countries have adopted a common definition of anti-Semitism. Why is it taking so long for the others to do so?

Fifth, integration of newcomers to Europe should include clear guidelines that the continent that gave birth to the Holocaust will never again allow itself to witness the return of Jew hatred.

And sixth, several European leaders have complained that the explosion in cyberspace has given a new lease on life to the spread of anti-Semitism. They are right. How to confront the problem is not easy, but merits urgent attention on both sides of the Atlantic Ocean.

The CNN poll ought to serve as a wake-up call. Will it?