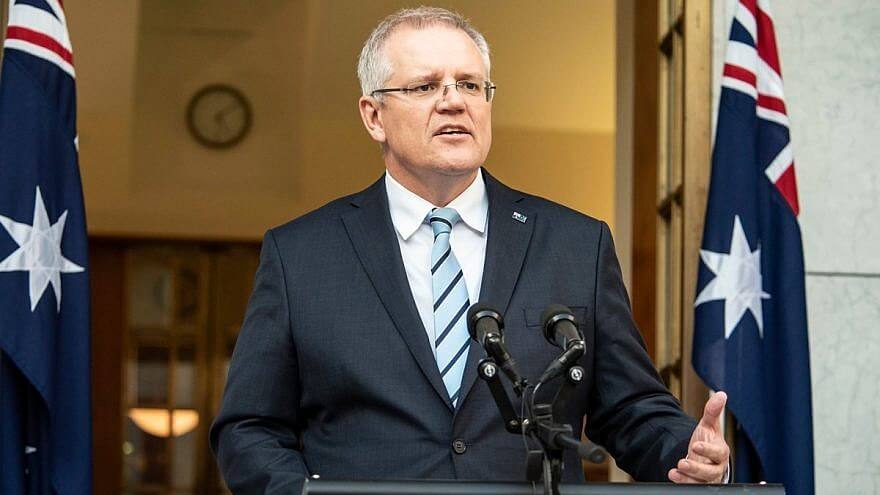 Australian Prime Minister Scott Morrison announced on Tuesday that he would consider moving the country’s embassy in Israel from Tel Aviv to Jerusalem, which would mark a major shift in policy in support of the Jewish state by a world power following the U.S. decision to recognize Jerusalem as its capital by the Trump administration in December.

The Australian leader also announced that his country will vote against recognizing the Palestinian Authority as the chair of the G77 bloc in the United Nations, in addition to reviewing the 2015 Iran nuclear deal, also known as the Joint Comprehensive Plan of Action.

Morrison, an evangelical Christian from the right-wing Liberal Party who assumed office in August, said he was “open to” the move, describing it as a “sensible” proposal.

“The orthodoxy that’s driven this debate says issues like considering the question of the capital are taboo. I think we have to challenge that,” he said.

“We’re committed to a two-state solution, but frankly, it hasn’t been going that well,” he continued. “Not a lot of progress has been made. And you don’t keep doing the same thing and expect different results.”

The potential move by Australia to recognize Jerusalem as Israel’s capital would make the country only the third to do so, following the United States and Guatemala in May. Paraguay relocated its embassy there as well, but its new leader, President Mario Abdo Benitez, reversed the move upon entering office.

At the same time, it would also be a major foreign-policy win for Israeli Prime Minister Benjamin Netanyahu, who has focused on building relations with nontraditional allies in places such as the Asia-Pacific region, Latin America and Africa. Netanyahu made a historic visit to Australia in 2017, becoming the first Israeli prime minister to go Down Under, where he touted the growing bilateral ties between the two nations.

According to the Israeli Prime Minister’s Office, Netanyahu spoke with the Australian leader ahead of his announcement on Jerusalem and “thanked him for his remarks.”

Australian pro-Israel groups, such as the Australia/Israel & Jewish Affairs Council (AIJAC), reacted positively to the announcements.

AIJAC director of international and community affairs Jeremy Jones told JNS that “AIJAC welcomes the foreign-policy announcements made by Prime Minister Scott Morrison. The commitment to review policy on Iran, with a view towards taking a stand which would genuinely impact on that state’s ability to continue to destabilize the Middle East, promote terrorism and existentially threaten Israel, is timely and necessary, given the changed U.S. policy and increasingly aggressive Iranian behavior.”

“The Prime Minister’s declaration of openness to recognizing Jerusalem as Israel’s capital and of potentially relocating the Embassy there from Tel Aviv, in the context of ongoing support for Israeli and Palestinian national aspirations and for a negotiated settlement between the parties, is also most welcome. It acknowledges the practical reality of Jerusalem’s status, and also that there is no logical reason to continually delay consideration of this issue.”

AIJAC national chairman Mark Leibler echoed his colleague’s remarks: “Recognizing Jerusalem as Israel’s capital—something the government now says it is seriously considering—would right a longstanding injustice, as Israel is the only state in the world which the international community insists has no right to choose its own capital.

“West Jerusalem, where the Knesset and the other main organs of the Israeli government are located, has been sovereign Israeli territory since 1948,” stressed Leibler. “No one doubts that any negotiated two-state peace agreement would see Jerusalem remain as Israel’s capital.”

“I congratulate the Australian government for being open to the idea of moving their embassy to Jerusalem,” said Rabbi Levi Wolff of the Orthodox Central Synagogue in Bondi, reported The Guardian.

“By doing so, the Australian government is simply stating that Israel—the only free democracy in the Middle East—has the freedom to choose where they want to have their capital. It’s a basic right afforded to every nation in the world, so why should Israel be treated any differently?”

Morrison cited former Australian Ambassador to Israel Dave Sharma, who is currently running for election in Australia in a heavily Jewish district, as a huge influence on the Jerusalem case.

“The previous discussion was premised on the point that you couldn’t pursue this issue without risking or without prejudicing the final status,” said the prime minister. “Now [Sharma] is arguing the opposite to that, and he’s saying that is possible. He’s arguing it can be done consistent with Australia’s long-running position. … He’s actually changing the way in which the issue is conceived.”

However, opposition leaders in Australia accused Morrison of playing politics with foreign policy, as Sharma is in a tight race for a byelection in for the city of Wentworth, home to 20,000-strong Jewish community.

“He is just posturing ahead of a byelection that he is desperate to win in order to hold on to a slim majority,” she said.

Sharma rejected those claims, saying the announcement “has to do with the timing of the U.N. resolution on which we need to take a position and articulate our views. I don’t think any voters are single-issue voters in Wentworth.”