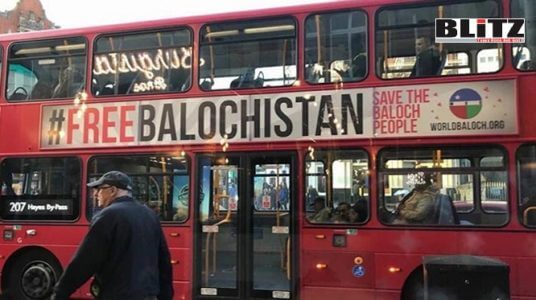 Baloch patriots have fought for over seven decades to free their beloved country from Pakistan’s illegal occupation and the time has come for India to lend an active helping hand to their cause as a trusted ally. With this fervent appeal, Baloch nationalist leader and President of Free Balochistan Movement Hyrbyair Marri set the ball rolling to a freewheeling interaction through video conferencing with journalists at Guwahati Press Club in northeast India on 25 September 2019 as part of its Meet the Press’ program.

Laying bare the double standards of Islamabad over Kashmir, Marri stressed that it is Pakistan that is responsible for the killing of the highest number of innocent Muslims. “India, on the other hand, lost its territory in Punjab following Partition, while a part of Kashmir was grabbed by Pakistan. India has legitimate claims to Pak-occupied Kashmir as well as Gilgit-Baltistan,” Marri said.

Tracing the course of the Baloch freedom struggle, Marri pointed out that Balochistan became an independent nation on 11 August 1947, but after nine months on 27 March 1948, it was treacherously occupied by Pakistan. This was done by securing the instrument of accession of Kalat State to Pakistan signed under duress by Mir Ahmed Yar Khan, the Khan of Kalat, which was later endorsed on 31 March 1948 by Muhammad Ali Jinnah, then Governor-General of Pakistan.

“But Kalat was one of districts, which was also part of Balochistan. Khan had simply no authority to decide on behalf of the entire Balochistan to accede to Pakistan. Since then, a myth has been systematically created by Islamabad that Baloch wanted to join Pakistan, which is a blatant falsehood. Noori Naseer Khan drew Balochistan’s political boundaries in the mid-18th century and even before that it was a free country, and we have plenty of historical records, documents and maps to prove our case to the international community,” Marri said.

The upshot of this betrayal was that the territory of Balochistan was parceled out primarily between Pakistan and Iran. “Both the Islamic countries, never mind their differences, have been on the same page when it comes to oppression of Baloch people. But Pakistan has been especially perfidious, lecturing India about Kashmir, while over twenty thousand Baloch have disappeared in the last decade. Even women, children and the elderly are not spared by the Pakistani army. The entire population there is deprived of education, health and other facilities,” Marri lamented.

Speaking about the rampant exploitation of Balochistan’s resources like natural gas, coal, gold, copper and various minerals, Marri said: “Now Modi has got a chance to prove that he is serious about Balochistan because we all know he talked about Balochistan from Red Fort in 2016. We need India’s friendship, support and help. Rather than using Balochistan independence struggle as a means to checkmate and counter Islamabad, New Delhi should look at Balochistan as an all-weather ally and India should see post-independence secular and stable Balochistan which will be one of the factors in bringing tranquility in the region. Our people are generous and tolerant, and the Hindus, Christians and adherents of other faiths who live peacefully among us have always contributed to our cause”.

He referred to the Hinglaj Mata Mandir, a Shakti Peeth in Balochistan and a place of pilgrimage for Hindus. Situated near the river Hingol, the Temple has an idol of Goddess Shakti (Sati), accompanied by Bhairava (a form of Lord Shiva); it is believed that Sati’s head with hingul (vermillion/sindoor) had fallen here after Lord Vishnu cut up her up with his sudarshan chakra to protect the Universe from Lord Shiva’s terrible wrath.

Born in Quetta, capital of Balochistan, to the family of veteran Baloch national leader Nawab Khair Baksh Marri, Hyrbyair completed his early education in Quetta and Kabul and then moved to Russia to study journalism. He was elected to the Balochistan provincial assembly in 1997; the youngest Baloch minister who declined to pledge loyalty to Islamabad. In 1999, Pakistani state brought trumped-up charges against Hyrbyair Marri, his father and brothers.

In 1999, he traveled to Europe and sought exile in the UK, “I am committed utterly to the struggle of my people for freedom. As part of it, we wish to come closer to like-minded people everywhere. I have visited India twice and hope to do so again when I was a student. As of now, we are planning to set up Indo-Baloch friendship platforms in different countries,” said Marri, signing off on a hopeful note.

NJ Thakuria is an eminent Indian journalist based in Guwahati and a contributor to Blitz.