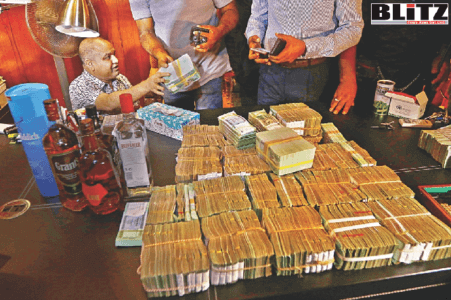 After achieving the goal of transforming an economically struggling Bangladesh into one of the fastest-growing economies in the world, Prime Minister Sheikh Hasina and her extremely efficient and committed administration have started a massive crackdown on corruption, extortion, bribery and social crimes such as illegal casinos, bars and nightclubs. Days back, members of Rapid Action Battalion (Rab) has recovered huge volume of weapons, ammunition, foreign liquor and millions of takas from the residence of a leader of the youth front of the ruling Awami League. Though the arrested individual is an influential member of the youth front of the ruling party, Prime Minister Sheikh Hasina has shown zero tolerance to such people. For years, some controversial members of the student, youth and other fronts of the ruling party have been continuing numerous forms of illegal activities thus tarnishing the image of the Prime Minister. Details about their wrongdoings and criminal activities came to the attention of Sheikh Hasina through reports from the country’s top intelligence agency. Immediately after receiving such report, the Prime Minister expelled two top figures of Bangladesh Chhatra League (BCL) and signalled of similar action against all of those controversial members of her own party and its fronts.

According to newspaper reports, few members of the youth fronts of the ruling party were running over 60 casinos illegally in Dhaka city alone. It should be mentioned here that, under Bangladesh law, the running of casinos are illegal. During early hours of 18 September, Rab arrested Jubo League (student front of the ruling party) leader Khaled Mahmud Bhuiyan for running an illegal casino in Dhaka city.

RAB personnel carried out simultaneous raids on his home and Fakirapool’s Young Men’s Club in the afternoon. They seized three firearms, including two for alleged breach of licence conditions, from the residence.

Meanwhile, RAB personnel carried out simultaneous raids on his home and Fakirapool’s Young Men’s Club in the afternoon.

Prior to this massive crackdown, which already has attained huge appreciation from Bangladeshis and members of the diplomatic corps, Prime Minister Sheikh Hasina said, “A leader of Jubo League’s Dhaka unit was committing extortion and illegal activities. Another [leader] was openly carrying guns. It must be stopped, “Those who deal in arms, shelter goons will be dealt in the same way as militants”.

Some Jubo League leaders claimed that Khaled’s association with the Awami League only dates back a few years. Earlier he was associated with the youth front of Bangladesh Nationalist Party (BNP), an arch-rival of the ruling party.

Was Khaled planted by BNP?

For years, ever since BNP was in power during 1992-1996 and 2001-2006, some of the top leaders of the party, including former Prime Minister Khaleda Zia’s son Tarique Rahman was maintaining armed cadres and Tarique was receiving monthly payment from those thuggish extortionists. Following Awami League’s landslide victory in 2008, BNP and its political cohort Jamaat-e-Islami have been secretly pushing its own party cadres into various fronts of the ruling party by bribing some of the controversial figures of Awami League. It is easily understood that people like Khaled Mahmud Bhuiyan were on purpose planted inside the ruling party to tarnish its image by continuing various forms of illegal and criminal activities. It may be mentioned here that, Khaled is a notorious terrorist and extortionist, who faces numerous criminal charges in the country. Earlier, Khaled was affiliated with Freedom Party, a terror outfit operated by the self-proclaimed killers of Bangladesh’s Father of the Nation, Bangabandhu Sheikh Mujibur Rahman.

Another culprit held by Rab

On 20 September, members of Rapid Action Battalion (Rab) arrested a man named SM Golam Kibria Shamim, who has made fortune as a contractor by identifying himself as a leader of the youth front of the ruling party. Rab also arrested his seven bodyguards, seized about Tk 20 million in cash, Tk 1.75 billion worth of fixed-deposit receipt or FDR savings, alcohol and firearms during the raid. It came two days after a RAB unit arrested Jubo League leader Khaled Mahmud Bhuiyan, who was expelled, for running an illegal casino.

It may be mentioned here that, prior to joining the ruling party, SM Golam Kibria Shamim was also a leader of Jubo Dal, youth front of Bangladesh Nationalist Party.

Meanwhile, police and Rab are continuing anti-corruption and anti-crime drives throughout the country.

Members of the diplomatic corps in Dhaka as well as key figures in a number of western nations have expressed satisfaction and applauded the timely actions of Prime Minister Sheikh Hasina and her administration against corruption and crime in Bangladesh. They said, Sheikh Hasina has been very effectively combating militancy and terrorism for the past many years and the latest crackdown of casinos and on corruption and crime will see similar success.

Commenting on the ongoing drive against corruption and crime, eminent journalist Nadim Quader in an opinion editorial in Dhaka’s leading English newspaper The Daily Sun wrote, “One has to understand that when the premier [Prime Minister Sheikh Hasina], known for her kindness, forgiveness and tolerance limit, has moved, it meant business and that too had risks attached to it as many hurt by the move would not be kind to her.

“A good move has many enemies and surely Sheikh Hasina knows there would be reprisals. Thus, she should be very alert to such elements and their conspiracies. Many people welcomed the move on one hand and on the other prayed for the safety and good health of the prime minister”.

Sheikh Hasina deserved appreciation for instructing the law enforcing agencies to exhibit zero tolerance towards corrupts, criminals and rogue figures even inside her party. Special kudos to the top intelligence agency for appraising the Prime Minister of such rogue elements.