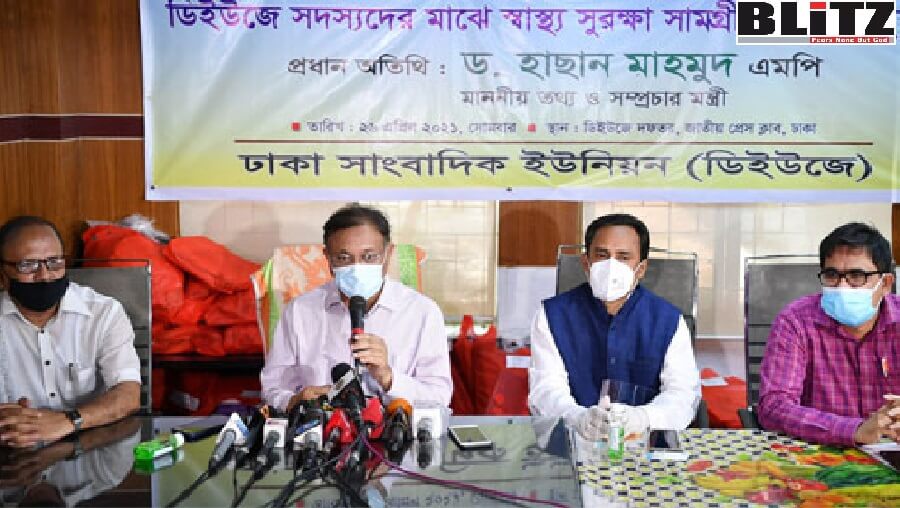 Information and Broadcasting Minister Dr Hasan Mahmud came down heavily on the BNP secretary general for his comment over the arrest of Hefazat leaders, who were involved in the mayhem amid the ongoing COVID-19 pandemic.

“How is it possible that those, who unleashed misdeeds during the pandemic, could not be arrested?,” questioned Hasan while addressing a distribution ceremony of health protection materials among the members of Dhaka Union of Journalists (DUJ) and different media houses at Jatiya Press Club in the capital.

DUJ distributed the materials on behalf of the Awami League Relief and Social Welfare Sub Committee.

Hasan said a fanatic terrorist group tried to create anarchy across the country during the prevailing COVID-19 pandemic. Though it is true but regrettably the BNP secretary general made a statement in favour of them, he said.

“Would it be logical that the persons who burned houses and properties of innocent people, set fire to land offices and burned documents of commoners and carried out attacks on rail stations and the masses could not be arrested? In the same way, who could agree on that the country’s existing criminal laws would not be applicable to them (troublemakers)?,” questioned Hasan, also Awami League joint general secretary.

The minister said there is no other political party, but Awami League that stands beside the people amid the COVID-19 situation. Even, the activists of the party (AL) are cutting paddy of farmers, he added.

Terming the newsmen as front fighter, Hasan praised the role of journalists during the Coronavirus situation.

He also extended thanks to AL Relief and Social Welfare Secretary Sujit Roy Nandi for providing the health protection materials and the DUJ for distributing those items to newsmen.

About the termination of journalists from different media houses, the minister said it is really regrettable and unacceptable. “I know that the media is also facing many problems like other businesses during the prevailing COVID-19 situation. But I urged the organizations (media outlets) from the very beginning to consider the issue on humanitarian ground not business ground. But many journalists were regrettably terminated,” he added.

The minister hoped that the concerned authorities would reinstate the retrenched newsmen.