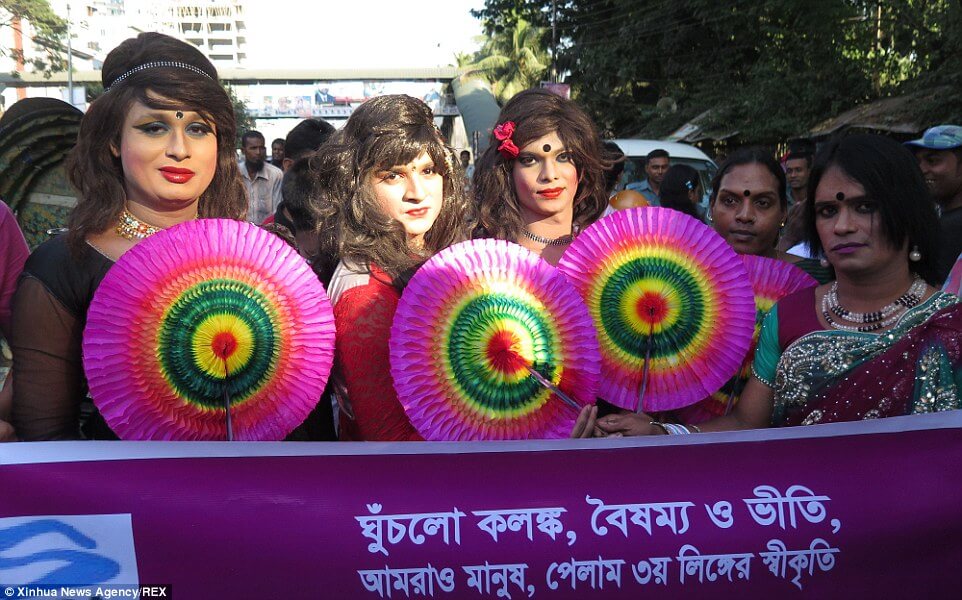 Bangladesh Parliament is going to have its first transgender MP from the reserve quotas for the women. As per the existing provisions, 50 seats are reserved in the parliament for women. This time, ruling Awami League will nominate to 43 seats, the Jatiya Party will seat four, BNP will seat one, and independent coalitions will seat two. A source close to Awami League said, since the transgender community got official recognition in Bangladesh couple of years back, this time the ruling party is willing to allow at least one MP from the transgender community. This decision of the ruling party will receive global appreciation as well it will brighten the image of Bangladesh as a secularist country.

Penetration is sufficient to constitute the carnal intercourse necessary to the offense described in this section.

Bangladesh society doesn’t recognize same-sex relationship, consensual romantic relationship and marriage between two opposite genders is supported though social conservatism is an impediment in this context also (society is less supportive) as culturally society is based on ‘marriage arranged by guardian’ system.

On 23 July 2013, a lesbian couple was arrested for marrying in secret. Shibronty Roy Puja, a 16-year-old Hindu, and Sanjida Akter, 21-year-old Muslim, fled their town for Dhaka, the capital, and got married in a Hindu ceremony. They were then arrested and threatened with life imprisonment. Similarly, another lesbian couple was arrested in October 2013 for their relationship. One member of the couple was described as having short hair and identified as the husband. The police had them take sex identification tests, and the doctors stated they were both females. The case was filed under Section 209, which is about unsocial activities.

Although public display of affection between friends of the same sex in Bangladesh is commonly approved and does not raise any controversies, there appears to be a strong objection towards homosexuality as such. This hostile attitude results from religious tradition of the country, with Islam being professed by approximately 90 percent of the population, and mentality of Bangladeshi society. There appears to be an intense social pressure to marry someone of the opposite sex, grounded in patriarchal  model of the society. Non-family members, including police and religious fundamentalist groups, have been known to blackmail, harass and even physically attack LGBT people. These “morality minders” are not sanctioned by the government, but they take advantage of the absence of civil rights and hate crime laws for sexual and gender minorities.

In 2003, Dr. Gary Dowsett, an Australian professor, published a report titled A Review of Knowledge About the Sexual Networks and Behaviours of Men Who Have Sex with Men in Asia as part of a study on how the AIDS pandemic is impacting the nation. The bulk of the report focused on male prostitution, but it did generate some public discussion about LGBT issues, with Indian movies and water poisoning through arsenic being blamed for making homosexuality more common. In reply, some people criticized these negative viewpoints as being unsound scientifically and based on prejudice.

In 2011, a research-based engagement with a school of public health at a university in Bangladesh had aimed to raise public debate on sexuality and rights in a very sensitive political context. By bringing together stakeholders, including members of sexual minorities, academics, service providers, media, policy makers and advocacy organizations, the research engagement worked to bring visibility to hidden and stigmatized sexuality and rights issues. Critical steps towards visibility for sexual minorities include creating safe spaces for meeting, developing learning materials for university students and engaging with legal rights groups.