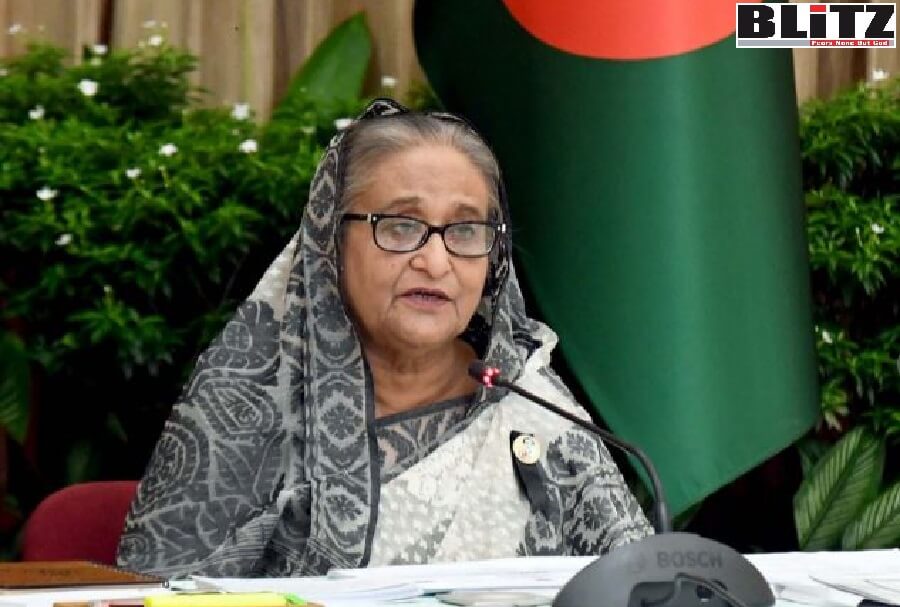 Bangladesh PM Sheikh Hasina asked the secretaries of the government to carry out the uplift activities keeping in mind that the existing development trend of the country might continue in future in the same manner.

“We have to run our activities in the way so the ongoing development pace of Bangladesh might continue in the future as well. We’ve built the foundation and have to pull [the country] ahead maintaining it. And we have to take all decisions keeping it in mind,” she said.

The Premier was speaking to the secretaries of different ministries and divisions of the government at the Secretary Meeting at NEC Conference Room in city’s Sher-e-Banglanagar, joining virtually from her official residence Ganabhaban.

Mentioning that Bangladesh has already attained the status of developing nation, she said the country has a long way to go in future.

Sheikh Hasina said the government has adopted development plans such as the Perspective Plan and Delta Plan to take the country ahead. “We have to formulate development plans keeping these plans in mind and also take appropriate measures to implement those,” she said.

The Prime Minister said her government’s main goal is to provide a developed and better life to the grassroots people of the country.

“Our main goal is to provide a developed life to the grassroots people. [They] would get rid of poverty and receive the opportunities of food, cloth, housing, treatment and education…,” she added.

Sheikh Hasina also asked all concerned to work sincerely to pull the country ahead as a prosperous and developed nation so the independence of the country achieved in return for the blood of millions of martyrs would never fail anyhow.

The Prime Minister said Awami League government after assuming power has formulated Vision-2021 on the basis of the dreams of Father of the Nation Bangabandhu Sheikh Mujibur Rahman and in line with the vision, Bangladesh has become a developing nation within the stipulated time (in the last 12 years).

She asked the secretaries to implement the development projects under their respective ministries and divisions, efficiently, effectively and appropriately.

She also urged the secretaries, especially those who get the responsibility newly, to put more concentration on the development agendas so those were not stalled during the implementation.

Referring to the facilities being provided to the government employees by the government, the Premier said “We’ve some demands [to you] which is the work that we want to do should be implemented in maintaining standard and quality, and we want this.”

Mentioning different types of training and higher education being offered by the government to the government employees, she said “We want an efficient and service-oriented administration which would expedite the country’s development.”

Expressing vows to wipeout corruption in the country, Sheikh Hasina said “Corruption is a disease and you should be kept away from it . . . you [secretaries] have to take stern action wherever corruption would be found.”

She urged the secretaries to adopt sustainable and realistic plans, especially not allowing setting up industry everywhere, protecting the environment from pollution and saving arable land to produce foods to feed the countrymen.

Laying emphasis on balanced development of the country, she said the government wants to ensure all urban facilities in rural areas so people could enjoy those staying in villages.

Regarding the reopening of educational institutions as those remained closed due to deadly  Covid-19 outbreak, the Prime Minister said “Education institutions are needed to be reopened . . . quick measures should be taken to this end and it is now more important.”

About the Coronavirus vaccine, she said the government has already taken required measures in producing and bottling the jab in the country. “Whatever vaccine is required, the government will collect.”

The Premier also urged the top bureaucrats to work sincerely so poverty would not be increased in the country due to Covid-19 pandemic as well as the inflation rate.

She also extended her thankfulness to the former and existing secretaries for their support and cooperation in implementing the development agendas taken by the Awami League government for the country’s development.

The Prime Minister also expressed her optimism that “you [secretaries] will work with more sincerity to develop and change the fate of the people of Bangladesh”.