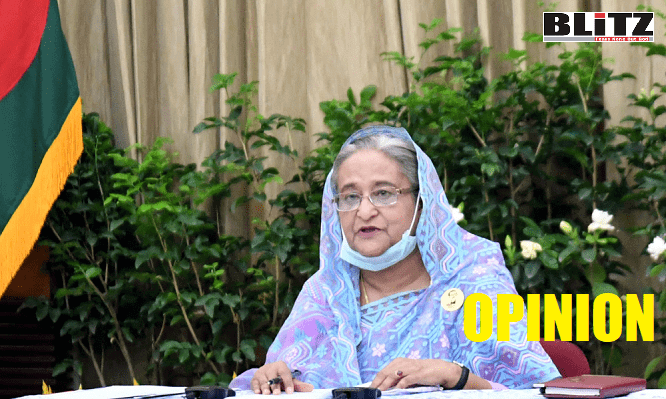 In the last 11 years, under the strong leadership of Prime Minister Sheikh Hasina, Bangladesh has emerged as a role model to the world. There has been an influx of groups that have been immersed in ideologies that are detached from the morality and ideology of the organization and even directly against the ideology of the Bangladesh Awami League. Every sensible media in Bangladesh and abroad are highly applauding Bangladeshi Prime Minister Sheikh Hasina for her zero tolerance on the drive against unethical corruption. As the daughter of the founding father of the country, Hasina has exhibited her guts in instructing the members of the law enforcing agencies, especially Bangladesh Police and Rapid Action Battalion (RAB) in eliminating unethical corruption with the noble goal of saving the nation from the grips of corrupt rogues. Let me answer one pertinent question here: why I have crafted corruption with ‘unethical’. When corruption is very much pernicious to life and to the whole nation then that corruption is considered as the worst of all unethical acts.

Bangladesh has already earned a bad reputation in the global context for the fake Covid-19 testing scam of some unscrupulous caregivers like JKG Pvt Hospital or Regent Hospital. Even some government-approved laboratories in the country have been conducting unscientific and unethical testing procedures which seem to be carried out under the watch of the Directorate General of Health Services (DGHS). Needless to say, the consequences of these deeds are being catastrophic by putting people’s lives in danger, as well as hurting national interests in the global arena: like fake N95 masks being provided to medical personnel, forged report of Covid-19, five lakhs Covid-19 testing kits lying in the warehouse instead of delivering to the testing centres, travel ban from Bangladesh to Italy, Japan and South Korea. No doubt, this unethical corruption not only tarnished the image of Bangladesh but also paralyzed our remittance flow from abroad. Bangladesh, particularly since the 1990s, if tallied with health ministers, most of them were indicted with a number of corruption cases. The health sector requires radical reforms following a dismantling of the present system. Resignation or removal is not the last word, those who play with people’s lives should be given exemplary punishment.

In the recent past, the casino scam also exposed how the ill-gotten money siphoned to other countries. The total money was black money. The country has lost a huge amount of revenue. Some casino patrons even became a moving bank with crores of cash in hand which total money was out of our inland economy and degraded people’s morally in the social fabric. According to the report of newspapers, we came to learn the bone-chilling information that casino patrons have more than a hundred of flats in a single city, some of them gambled Tk 40 crores in a single night. I am damn sure even Bill Gates would not be daring enough to spend such amount on gambling(!) or he has not that number of flats to live in a single city.

All members behind that corruption is very close to certain members of the ruling party in Bangladesh. But it is Sheikh Hasina who abandoned those hoodlums and brought them to justice. One thing we must admit, these unethical corruptions were busted out first by the Hasina’s government. So the government must get the garland, but the ruling party must face the gallow. How did crook like Shahed get to snatch a position in the party or how Enu-Ropom brothers of cupidity in nature lead such a party from the front line which has a prestigious history of driving roles to the birth of a country. How did such people come in contact with important leaders of the ruling party? It is not clear how he took part in the talk show on mass media as an Awami League leader. Many such opportunists have entered the party and that group is looting without any hindrance. The party has to take responsibility in the end. A few days ago, another local Awami League-backed independent, MP, was arrested in Kuwait. How did he get the support of the party? How did the MP’s wife also become a member of parliament in reserved women’s seat?

The people of the country can often know from the press briefing of the Awami League leaders what the BNP leaders have said. It’s not the responsibility of the Awami League to keep the BNP alive on the ground. In a democracy, the principles, and ideologies of each party must be presented to the people by the party, and then only one will get to rise to power. No one needs to take responsibility for anyone here.

Individual Sheikh Hasina has shown her courage to eradicate the bad elements from the party as well as to stop the unethical corruption in the country. Shahed, Enu, Samrat are all greedy for the benefits of her party, so bringing them to justice is a matter of honest courage. This is not only the job of Sheikh Hasina alone, all the responsible persons of the party should exercise their duties properly.