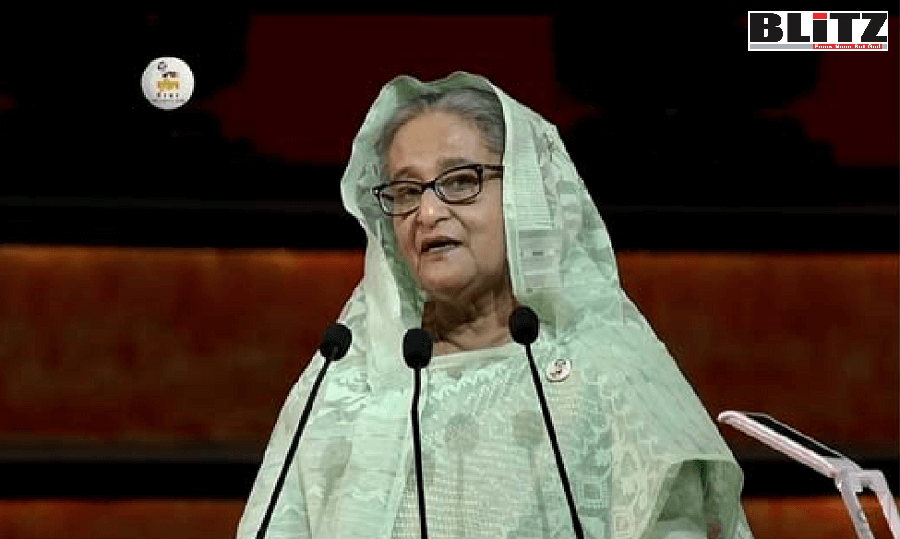 Prime Minister Sheikh Hasina made a fervent appeal to the world people to ensure sustainable development for their greater interest.

“I make a fervent call to the people of the entire globe to make sure durable development for their greater interest,” she said.

The premier was speaking at the 6th day programs of the 10-day grand celebrations of the birth centenary of Father of the Nation Bangabandhu Sheikh Mujibur Rahman and the Golden Jubilee of independence at the National Parade Square here this afternoon.

President Abdul Hamid joined the ceremony as the chief guest and Nepalese President Bidya Devi Bhandari joined it as the guest of honor.

Sheikh Hasina, who chaired the function, pointed out the global warming, saying the climate change has made the countries of the subcontinent the most vulnerable. “We’re the most sufferers of the consequence of climate change though we’re not contributing to it,” she said.

The premier went on saying: “We can temporarily protect ourselves through adaptation, but the process will fail to provide sustainable protection unless the current trend of climate change is restricted.”

As the current President of the Climate Vulnerable Forum or CVF, Sheikh Hasina said Bangladesh has been urging the world leaders to take immediate steps to combat climate change.

Referring to the launching of the Global Climate Adaptation, Bangladesh office last year, the premier said it has started working on tackling the effects of climate change in South Asia.

Sheikh Hasina said countries on the Himalayan basin are prone to natural disasters such as earthquakes, cloud bursts, avalanches, landslides and flash floods.

In addition, she said, the coastal regions like Bangladesh are to stand against frequent floods, tidal surges, earthquakes, heavy rains, or droughts.

President Hamid’s wife Rashida Khanam and Bhandari’s daughter Usha Kiran were present, among others, at the ceremony.

The Nepalese President became the third among the world leaders to attend the celebrations.

Earlier, Maldivian President Ibrahim Mohamed Solih and his spouse Fazna Ahmed graced the opening ceremony of the celebrations on March 17, and Prime Minister of Sri Lanka Mahinda Rajapaksa joined on the third day.

The theme of the celebrations is “The Eternal Mujib” but a separate theme for each day has been selected with today’s one being “This Land Is My Land”.

Like Loading...
Recommended for you:
Continue Reading
Advertisement
You may also like...
Related Topics:Father of the Nation Bangabandhu Sheikh Mujibur Rahman, Golden Jubilee of independence, Prime Minister Sheikh Hasina