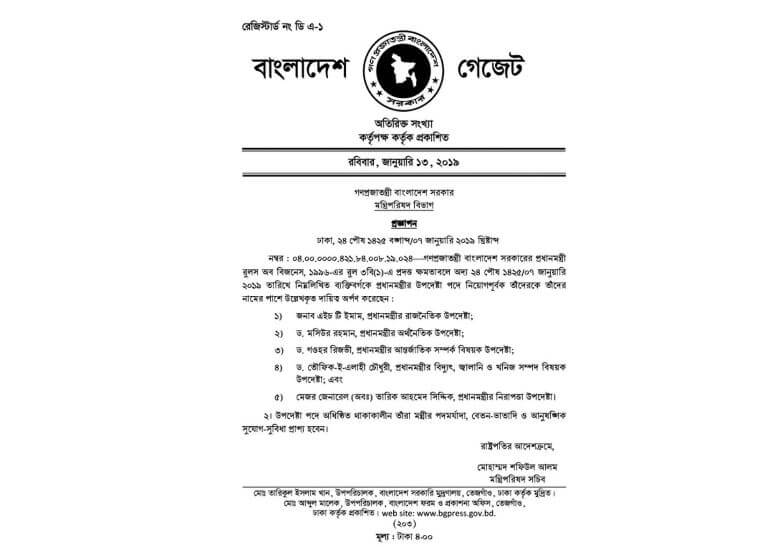 The prime minister appointed the advisers based on the power bestowed on her through Rule 3B (1) of the Rules of Business-1996. The five were reappointed on January 7 2019. The Cabinet Division published a gazette notification to this end on December 13, 2019. The five advisers would enjoy protocols, salaries and other benefits that of a minister, said the notification.

Prime Minister’s political adviser H T Imam is a former top bureaucrat who also has served as the cabinet secretary during the rule of Khandaker Mushtaq Ahmed, one of the key-masterminds behind the brutal assassination of Bangabandhu Sheikh Mujibur Rahman.

Media adviser to Prime Minister Sheikh Hasina seems to have been dropped because of his total inefficiency in contributing in positive campaign in the international media in favour of the ruling Awami League. His silence particularly before the December 30 general election even had caught the attention of the local and international media. According to reports, media adviser Iqbal Sobhan Chowdhury’s newspaper the Daily Observer did not even publish an important news item centering telephonic conversation between a front-ranking leader of Bangladesh Nationalist Party and an alleged handler of Pakistani spy agency ISI, although the same news was widely covered by most of the Bangladeshi media as well as several international media outlets.

Commenting on dropping Iqbal Sobhan Chowdhury, media analysts say, it is of no use for Prime Minister Sheikh Hasina in keeping a person as her media adviser who would either feel uninterested or on purpose ignorant on helping the government with positive media coverage in the world, especially when the ruling party badly requires it.

Sheikh Hasina has changed the portfolio of Maj Gen (retd) Tarique Ahmed Siddique from the previous defence adviser to security adviser. Hailing from a respected family, Maj Gen Tarique Ahmed Siddique, rcds, psc has earlier has served in Directorate General of Forces Intelligence. From 17 November 2001 to 17 March 2002 he served as the Engineer in Chief of the army. He also served as Senior Instructor (Army) in Defence Services Command and Staff College (DSCSC) Mirpur. He was chief of personal security to Sheikh Hasina when she was the opposition leader.

Maj Gen Tarique Ahmed Siddique was present during 2004 [August 21] gruesome grenade attack which tried to assassinate Sheikh Hasina. He was appointed to the post of Adviser to Prime Minister in 2014. He advises the Prime Minister on anti-terrorism activities. He inaugurated the Disaster Response Exercise and Exchange in 2016. He is a graduate of Defence Services Command & Staff College (DSCSC) Bangladesh. He has done RCDS course from Royal College of Defence Studies (RCDS) London, United Kingdom.

Gen. Siddique plays key role in combating radical Islamic militancy and terrorism. International media has applauded his most effective and dynamic role as the security adviser to the Prime Minister.

Maj. Gen. Siddique’s role was said to have been critical. Earlier, Wikileaks cables quoted former US ambassador James Moriarty reporting back to Washington in February 2009: “Hasina depends on retired Maj. Gen. Tarique Ahmed Siddique for his military expertise and trusts him, based on his loyalty and his relationship with her family. Siddique, whose brother Shafique is married to Sheikh Rehana (PM’s sister based in London), has a long history as part of Hasina’s family, including acting at times as surrogate father for her son Sajeeb Joy Wazed (based in Washington), which is partially what inspires Hasina’s trust.”

Prime Minister Sheikh Hasina is going to increase the number of her advisers soon. In this case, name of businessman Salman F Rahman is in the list.