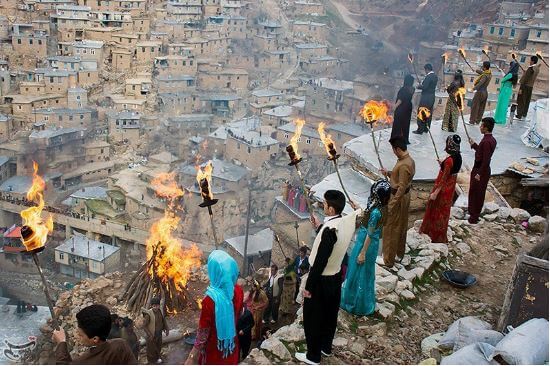 The new strategy toward Iran taken by Donald Trump, which includes withdrawing from the nuclear deal, imposing sanctions on Tehran, and isolating it internationally, created expectations among the Kurdish national movement in Iran that its common interests with the US would help it gain American support in fighting the regime in Tehran. To the movement’s dismay, this commonality of interests has not been translated into practical terms – unlike US policy toward the Kurds in Iraq and Syria. Compared to the other Kurdish populations, the Iranian Kurds have remained isolated and silenced.

The gloomy situation of the Kurdish minority in Iran is ironic in light of the fact that during the short life (January-December 1946) of the Republic of Mahabad – which gave Kurds their first modern political party, national symbols like a flag and an anthem, and a political framework to aspire to – Iranian Kurdistan was the cradle of Kurdish nationalism.

The Iranian Kurds suffer from a “double otherness” that has set them apart from the Islamic Republic. From a religious standpoint, about 70% of the approximately eight million Iranian Kurds are Sunni (the rest are Shiite). From an ethnic standpoint, they collectively constitute a nation distinct from the Persian. Nevertheless, their opposition to the radical Islamic regime seems less intense than that of Kurds in other countries.

To explain these paradoxes, one needs to analyze the stances of four main actors other than the Kurds themselves: the Islamic Republic, the Kurdish enclave in Iraq, the various governments of Iraq, and the US.

The Islamic Republic’s all-out war on the Kurds

The Kurds initially reacted with enthusiasm to the advent of Ayatollah Khomeini and the establishment of the Islamic Republic in February 1979. After some thirty years of oppression by the Shah’s regime, they thought their status was finally going to improve. The leading faction, the Democratic Party of Iranian Kurdistan (KDPI), emerged from underground, and its leader, Abdul Rahman Ghassemlou, returned from exile and took command of the group. But the Kurds and their leadership soon realized that the Islamic Republic and the process of Shiite radicalization it had set in train were much more dangerous to them than the Shah’s regime had ever been.

Khomeini simply denied the existence of minorities in Iran from the start, asserting that Islam did not distinguish among minorities. (As recently as May 2016, the ostensibly liberal president Hassan Rouhani declared that “The Kurds are Iranians and Muslims above all.”) Khomeini backed up his stance with action. For example, he prevented Ghassemlou from taking part in the Assembly of Experts entrusted with formulating a new constitution for Iran. In response, the Kurds withdrew their support for the constitution and for the new regime. Khomeini then called the Kurds “heretics” and demanded that KDPI members “adopt Islam” – and if they didn’t, they could expect harsh treatment by the authorities.

When the Kurds tried to exploit the chaos prevailing in the country to launch an uprising, Khomeini issued a ruling on August 20, 1979 calling for jihad against the rebels. The uprising continued intermittently until the summer of 1983, with the Kurdish parties reiterating their demand for autonomy. The regime rebuffed this demand on the grounds that such a concept does not appear in the Koran.

Once the revolt was finally quashed, the regime used extremely repressive measures to prevent further insurrection by the Kurds, including killing their leaders. Ghassemlou, for example, was murdered by Iranian agents in Vienna in 1989 after being induced to take part in talks on a solution to the Kurdish problem. The murder immediately reignited the revolt, which continued until 1996.

The ayatollahs also hanged hundreds of young Kurds suspected of political activity (the regime likewise executes prisoners who have been incarcerated ten years or longer). These executions were meant to convey a threatening message to the Kurds, and the method is used as a deterrent tool to this day. For example, in the six months attending President Trump’s announcement of the US withdrawal from the nuclear deal, the regime executed 44 young Kurds.

Another tactic used by the regime was to bombard bases of the Iranian Kurdish opposition in the Kurdish enclave in Iraq. These bombardments continued intermittently during the years of the revolt, 1989-96, which ended with the Kurdish organizations announcing a unilateral ceasefire. The year 2004 saw the establishment of a new Kurdish opposition group, the Kurdistan Free Life Party (PJAK), which operated within the Iraqi Kurdish enclave. This organization, which is in fact affiliated with the Kurdistan Workers’ Party (PKK) in Turkey, carried out operations against Iran but in 2012 was heavily pressured by the regime to cease its activity.

Meanwhile, the regime implemented a divide-and-conquer policy toward the Sunni and Shiite Kurdish populations. It extended political, social, and economic benefits to the latter while undermining the socioeconomic status of the former, whose area of residence in Kurdistan became one of the most disadvantaged in the country. In the religious domain, the regime began to attempt the Shiization of the Sunni Kurds while preventing the construction of Sunni mosques.

As difficult as the Kurds’ plight is within Iran, their relations with the Iraqi Kurdish enclave are troubled as well. Since the late 1960s, the Kurdish factions in Iraq have developed a strong dependency on Iranian governments, both the Shah’s and that of the Islamic Republic. The support they have received in fighting the Iraqi regime compelled them to pay protection money in the form of aiding the fight against their Iranian Kurdish brethren.

The Iraqi-based Kurdistan Democratic Party (KDP) has thus fought with the Iranian KDPI at the behest of the Islamic Republic. The KDP had bases and camps in the north of the primarily tribal Iranian Kurdish region and fought for influence with its Iranian counterpart. With the outbreak of the Kurdish revolt in Iran, the KDP launched a campaign against the Iranian party that climaxed in 1983 when it helped the Tehran regime defeat the Iranian Kurds.

After the collapse of the Kurdish revolt in Iran, Iranian Kurdish parties found refuge in Iraqi Kurdistan and set up bases there. The local government did not, however, wish to harm its relations with Tehran and forbade the Iranian parties from operating against Iran from its territory. This effectively paralyzed them. They went underground in Iran, and in the Iraqi Kurdish enclave they became a stationary target for Iranian bombardment if they dared to act.

The US keeps its distance

In contrast to the close ties it has forged with the Kurds in Iraq and recently with the Syrian Kurds, the US has kept its distance from the Kurds in Iran. Traditionally, from the time of the Republic of Mahabad, Washington saw the Iranian Kurdish organizations as under the sway of the Soviet Union. Moreover, because the US supported the Shah until his downfall in 1979, it regarded these organizations as a factor endangering the stability of its Iranian ally. But even after the Shah’s demise, Washington did not try to help the Iranian Kurds and recruit their support against the Islamic regime. One possible explanation is that the US has consistently preferred the territorial integrity of states over other considerations such as supporting an oppressed minority.

The PJAK’s establishment in 2004 saw initial contacts between it and the Bush administration. That lasted until February 2009, when, only a month after his inauguration, President Obama declared the group a terror organization. This was a first indication of the administration’s new strategy, which aimed for a historic reconciliation with the Iranian regime (including a nuclear agreement) and hence precluded any assistance to the Iranian Kurds.

Yet even the Trump administration, which adopted a diametrically opposed strategy toward the Islamic Republic, did not seriously attempt to support the Kurds or make use of them to weaken or deter Iran. The reasons are not clear – it may have seen them as too weak, may have wanted to avert Iranian retaliation against the Iraqi Kurdish enclave, or may have wanted to avoid opening another Pandora’s box like the one in Syria.

After Trump’s announcement of the withdrawal from the nuclear agreement, the Iranian Kurdish organizations believed the conditions had ripened for an uprising against the regime in Tehran. They quickly discovered, though, that the US had turned its back on them. They were subjected to harsh measures by the regime, including bombardment of their bases in the Kurdish enclave and a spike in the number of hangings of Iranian Kurds. The Iranian Kurds lost on all counts and remain silenced and remote from the international stage.

Modern history shows that, while the Kurds typically use wars and revolutions as a springboard to improve their lot, once the fighting stops, they tend to pay a heavy price because of their diplomatic-political weakness and lack of levers of influence in the international arena. The failures that occurred with the collapse of the Republic of Mahabad at the end of WWII, following the uprising in the early days of the Islamic Revolution, and at the end of the Iran-Iraq War are only a few of many examples.

Prof. Ofra Bengio is a senior researcher at the Moshe Dayan Center of Tel Aviv University and a lecturer at the Shalem Academic Center. She has published many studies on the Kurdish issue, the most recent of which is the forthcoming Kurdistan’s Moment in the Middle East. Email