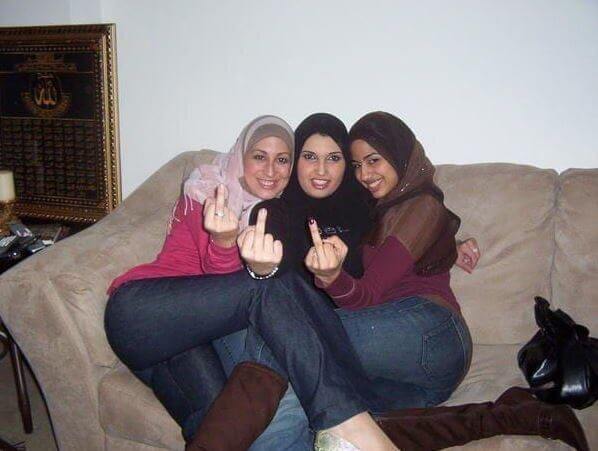 Editor’s note: This photograph is not related to the article, but still we decided to publish it. In the photograph, three hijab-worn Muslim lesbians are seen sitting in a sofa. At their right side, there is a huge poster containing ninety-nine names of Allah. While they are abiding by Sharia rule (by wearing hijab) everyone can see their state of mind. The sign possibly they are showing to the Western world as well as all of us – those who confront radical Islam and promoting secularism. Unfortunately, we are letting them win by remaining silent or at least ignoring the alarming rise of radical Islam.

When California launched a second legal case against Cathy Miller and her Tastries Bakery after she declined to violate her Christian faith and produce a cake promoting same-sex marriage, the state alleged the two plaintiffs were “stunned, offended, and hurt.”
But the reality?

The duo had been wearing microphones while visiting various bakeries to find someone who would “discriminate” against them.

That’s according to the Freedom of Conscience Defense Fund, which has been defending Miller since the original case was launched by the Department of Fair Employment and Housing.

In the government’s first case, U.S. District Judge David R. Lampe ruled Tastries’ owner had a First Amendment right not to express a message with which she disagreed.

He said it was a simple case of First Amendment protections for Miller’s speech.

The state, which declined to appeal that ruling, then announced it was beginning its investigation all over. And while the judge agreed the state had the right to investigate, he pointed out his ruling was final.

And he noted the state had refused to appeal.

Now the state has renewed its prosecution explaining that lesbians Eileen Rodriguez-Del Rio and Mireya Rodriguez-Del Rio were “stunned, offended, and hurt” when Tastries said it could not provide a cake for their wedding.
“The evidence shows that this was all a set-up to get money and to destroy Cathy for her Christian faith,” said Charles LiMandri, president and chief counsel of FCDF. “The couple never intended to actually celebrate their marriage with a custom cake from Tastries. We hope as this case moves forward the full truth will come to light.

“In any event, Cathy’s First Amendment rights already have been vindicated by the prior judgment in her favor.”

The legal team said that “facts discovered during the investigation already “show that the couple had intentionally been searching for a business that would ‘discriminate’ against them, wearing hidden microphones to catch a business owner in the act.”

“This meritless lawsuit is proof that California’s pro-LGBT bureaucrats will stop at nothing until Cathy is put out of business,” said LiMandri.

“For over a year, Cathy’s family and employees have faced death threats, lewd messages, and vandalism. The sad truth is if the government wins, then no Christian business owner will be safe from persecution.”

The second complaint is the same as the first, asserting the same-sex couple deserves payment for “damages.”

“Mireya’s nose started to bleed – which was completely out of the ordinary – and she got a headache,” the state alleges. “Although she tried to contain her emotions, Eileen later broke down, and her emotional anguish aggravated her rheumatoid arthritis.”

The defense team pointed out: “Although the lawsuit claims ‘Eileen and Mireya did not know what to do’ after the incident, the record shows the couple immediately took to social media, and within 30 minutes Miller began receiving death threats and emails containing images of people engaging in depraved sexual acts. News crews arrived shortly afterward. Traumatized by the sudden wave of rage from the LGBT activists, several Tastries employees quit.”

In the previous case, Lampe denied a motion to order Miller to create the cake because it would “do violence” to the First Amendment, and the government never appealed.

The state said it could continue its investigation of Miller, no matter the court’s ruling.

A spokesman for FCDF told WND discrimination cases have been profitable to complainants, with awards often tens of thousands of dollars.

He said the evidence shows the two had been wearing microphones, but he said other details could not be released at this time.

Lampe said the state had a right to investigate Miller.

But he said that with the court having rendered its judgment, “the investigation must be tailored to ascertainment and discovery of facts reasonably and rationally calculated to serve as the basis for an argument for modification of the judgment.”

The U.S. Supreme Court ruled on the issue in June in Colorado’s case against Masterpiece Cakeshop baker Jack Phillips. The court found the state was antagonistic to Phillips’ Christian faith and concluded he had a right to decline to create such a cake.

Tastries referred the cake order to another bakery willing to accommodate the same-sex-couple. But the couple alleges Tastries’ unwillingness to fulfill their order violated the state’s Unruh Civil Rights Act, which provides “that all persons in California are free and equal.”

“Ms. Miller believes any preordered Tastries cake made for an event that celebrates a same-sex couple’s marriage sends a message – whether or not any one knows the cake is from Tastries – that Tastries is in agreement with the celebration — a message she is unwilling to send, without exception,” the state admits.