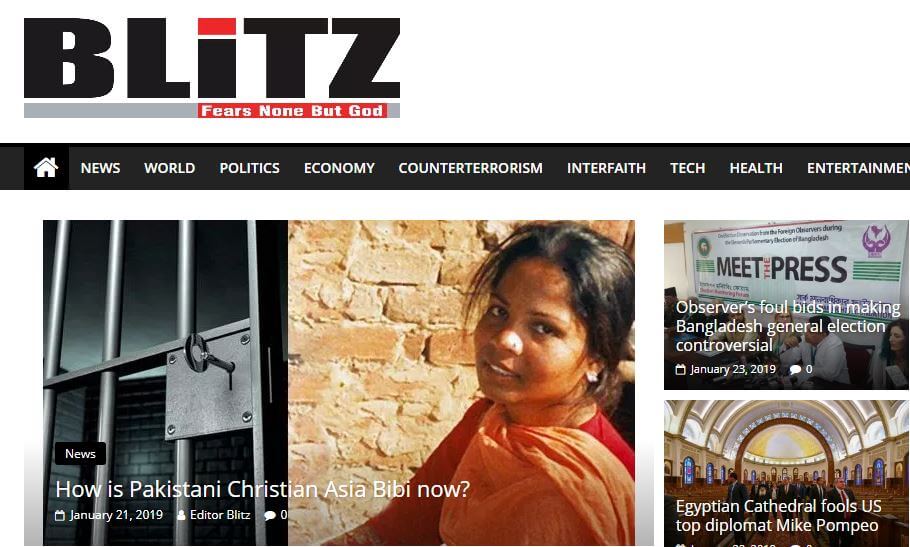 From January 22, 2019 afternoon, access to the online edition of Blitz has been blocked by the authorities concerned for reason best known to them. Readers around Bangladesh started witnessing this when they failed in accessing the Blitz site. This is for the first time in past sixteen years since its publication; Blitz has also become a victim of press repression. Till filing of this report, the site was not accessible from anywhere in Bangladesh.

Back in 2003, Blitz began its journey as the only newspaper in the Muslim world that boldly confront radical Islam, jihad, antisemitism, religious extremism and promotes interfaith harmony. During past sixteen years, the newspaper has been able in establishing its image worldwide as a platform of promoting free speech and educating people in denouncing religious extremism.

To the Western policymakers, Blitz is seen as the most authentic source of unbiased information on Bangladeshi, regional and global affairs. Large number of research scholars around the world regular quote Blitz in their research works.

Despite repeated attempts, reporters in Blitz could not find the cause of its online edition being blocked in Bangladesh while some of the people concerned even had said this blocking might have been done beyond the knowledge of the government.

Although the reason behind such abrupt blocking of the Blitz site is yet to be learnt, it is greatly anticipated that either agents of Pakistani ISI or those radical Islamic militancy groups might have hands behind this notoriety.

Meanwhile, editorial board of this newspaper has drawing attention of journalist rights groups such as Committee to Protect Journalists (CPJ), Reporters Without Borders (RWB), PEN, International Federation of Journalists (IFC) as well as members of the media around the world to the case of blocking of Blitz site in Bangladesh.