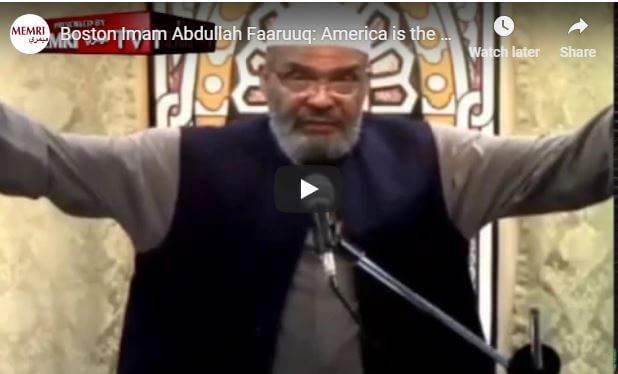 In sermons in late 2016 and early 2017 at the Mosque for the Praising of Allah (Mosque Praise Allah) in Roxbury, Mass.—“Boston’s Oldest Continually Operating Masjid,” according to its website—Imam Abdullah Faaruuq asserted that American leaders have “the wrong system … following the ways of men” because “everything that Allah told us is forbidden, they permit—homosexuality, gay marriage, marijuana, alcohol, prostitution.”

He went on to invite President Trump and Hillary Clinton to “submit to the will of God” and become Muslim. Referencing the “Appeal to the Great Spirit” statue at the Museum of Fine Arts in Boston, which depicts an Indian mounted on a horse looking heavenward with his arms widespread in, he said, “supplication to Allah,” he added, “This is the land of the coward and the home of the slave … Islam is America’s future,” and that without Islam “America will meet its demise.” He concluded: “Submit to the will of God, or this country will fail … America, be Muslim, and open the doors of this nation.”

Faaruuq, a former Northeastern University chaplain, has made headlines because of his controversial sermons and the Boston-area terror suspects attending them. One such worshiper at the Mosque for the Praising of Allah was Usaamah Rahim, a terror suspect killed as he brandished a knife at police as he allegedly sought to behead them. Rahim’s family worshiped at the mosque and referred to Faaruuq as  a “close friend”; Faaruuq condemned the police killing of Rahim as “reckless” and “dangerous.”

Faaruuq has delivered sermons at a Cambridge mosque operated by the Islamic Society of Boston Cultural Center (ISBCC) and at the ISBCC itself. Several convicted terrorists reportedly worshipped at the Cambridge mosque, among them Boston Marathon bombers Tamerlan and Dzhokhar Tsarnaev, as well as Aafia Siddiqui, who plotted a chemical attack on New York City, and Tarek Mehanna, sentenced in 2012 to 17 years in prison for conspiring to aid Al-Qaeda. Faaruuq publicly defended Siddiqui and Tarek Mehanna; he was active in a movement seeking to free them, and called on Boston Muslims to defend Siddiqui because “after they’re finished with Aafia, they’re gonna come to your door.” As a result, he was dismissed from his position as Northeastern University chaplain. An ISBCC founder, Abduraham Alamoudi, was sentenced in 2004 to 23 years in prison for his role in a plot to kill Saudi royal officials; he too allegedly worshipped at the Cambridge mosque. A 2010 video of Faaruuq preaching at the ISBCC showed him exhorting worshipers to “grab onto the rope, grab onto the typewriter, grab onto the shovel, grab onto the gun and the sword.”

Nevertheless, a December 2016 titled “Out of Many, One,” billed as “an interfaith call for dignity and diligence with [Massachusetts] Sen. Elizabeth Warren and [Boston] Mayor Marty Walsh,” and sponsored by the Greater Boston Interfaith Organization, was held at the ISBCC. Additionally, in 2009, the Mosque for the Praising of Allah was part of the Pluralism Project through Harvard University.

Faaruuq also asserted, in 2015, that ISIS was not created by Islamic teachings, but rather by America. Many sermons by Faaruuq are available on YouTube.

Read the full report at MEMRI.