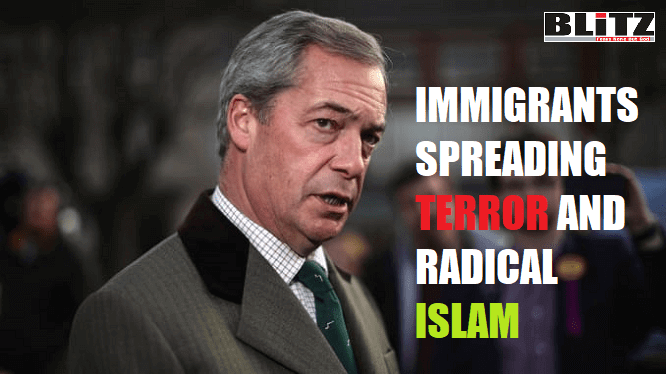 Several days ago, Brexit Party leader Nigel Farage warned that the “illegal boat migrant scandal” was “bigger than anyone realises.” Last week, 91 migrants crossed the English Channel in a single day; they originated from Iraq, Syria, Kuwait, and Iran. Since the coronavirus lockdown began, 550 migrants have reportedly entered the UK, and all have stayed there.

Farage decided to take matters into his own hands to “expose the ‘scandal’ of Britain’s borders remaining open at a time where the rest of the country is closed.”

He went down to the port at Dover and “filmed the Border Force bringing a group of migrants” to the British shores. But then he was reprimanded by police for his “non-essential travel.”

As a a politician and British citizen, Farage has experienced the power of the state to do harm in his own country by allowing in unvetted migrants, while at the same time applying overzealous policing to law-abiding citizens — in this case, himself. Important questions in all this are why the UK continues to turn a blind eye to its migration problem, why it refuses to deal adequately with the problem of Muslim rape gangs, and why it continues to do all it can to conceal the Pakistani and Muslim identity of Muslim rape gangs. The UK should expect much better since Theresa May is no longer Prime Minister. But whether it will get it remains unclear.

“Farage: Police Visit Won’t Stop Me From Reporting on Illegal Immigration”, by Kurt Zindulka, Breitbart, May 6, 2020:

Nigel Farage struck a defiant tone after being informed by police that reporting on the illegal boat migrants was not “essential travel”, saying that he will continue “to cover this scandal” despite the police warnings and the criticism from the “sneerocracy” in the mainstream media.

On Monday evening, two officers from Kent Police visited Mr Farage after he travelled to the port at Dover, where he filmed UK Border Force “acting as a taxi service” as they brought illegal migrants that had set sail from France ashore at Dover.

Describing the late-night visit to his home, Mr Farage wrote in The Telegraph that the police told him: “We understand that you have been to Dover today and we have received a complaint. We’ve come to talk to you about essential travel.”

“I was astonished and, although I remained polite, incredulous. I replied: ‘I’m not going to take that’,” the Brexit Party leader wrote.

“I pointed out that illegal immigration is something I have written and broadcast about. I explained that seven million people had viewed my videos online in the last week, showing this is a public interest matter in which the public is most certainly interested,” Farage added.

The UK’s lockdown law has exceptions for particular professions, including journalists. While Mr Farage is best known as a politician, he has a national radio show and is a frequent newspaper columnist.