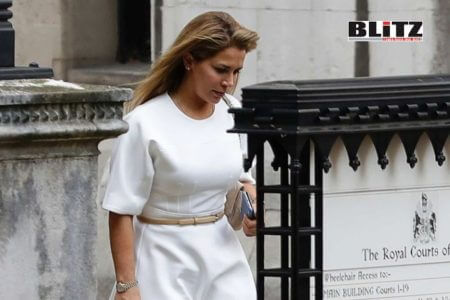 For the past few months, Britain has been playing double-standard centering the case of Princess Haya Bint Hussein, who fled Dubai with millions of dollars, which she stole from her husband, Sheikh Mohammed Rashid Bin Maktoum. Although Haya’s asylum prayer has already been rejected, Britain has given her the opportunity of staying in London under the shield of diplomatic immunity by getting appointed as the Deputy Chief of Mission at the Jordanian Embassy in London. Britain also is allowing Princess Haya and her cronies in continuing various forms of conspiracies, including propaganda against Sheikh Maktoum, by using British soil.

It is well documented that the United Kingdom has become the epicenter of dark and black money, where notorious criminals and corrupt individuals are smuggling in hundreds of millions of dollars and investing in various projects. Although Britain always tried to show its virtuous face to the world as one of the most disciplines nations, in reality, British policymakers, law enforcing agencies and majority of politicians have already turned into mere whores or pimps who has no shame in gladly accepting black money and granting asylum or immigration to notorious criminals and corrupts.

With such a nasty image, Britain has now refused to let Anne Sacoolas, the wife of an American diplomat in London, enjoy the diplomatic immunity.

Britain and the United States have been involved in a diplomatic tug-of-war over the case, but Dominic Raab, the British foreign secretary, said in a letter to the Dunn family on Saturday that Ms. Sacoolas’s immunity no longer applied because she had gone back to the United States.

“The U.K. Government’s position is that immunity, and therefore any question of waiver, is no longer relevant in Mrs. Sacoolas’s case because she has returned home,” Mr. Raab said in the letter that was shared with The New York Times on Sunday.

Following this, the well-accepted international law known as Vienna Convention, that largely shields diplomats and their family members from criminal prosecution has come under question.

Under international law, foreign diplomats and family members enjoy certain protections that allow them to avoid prosecution for almost any crime unless the diplomat’s home country waives immunity, according to the 1961 Vienna Convention on Diplomatic Relations.

It may be mentioned here that, Anne Sacoolas is accused of a road accident that had killed a passerby.