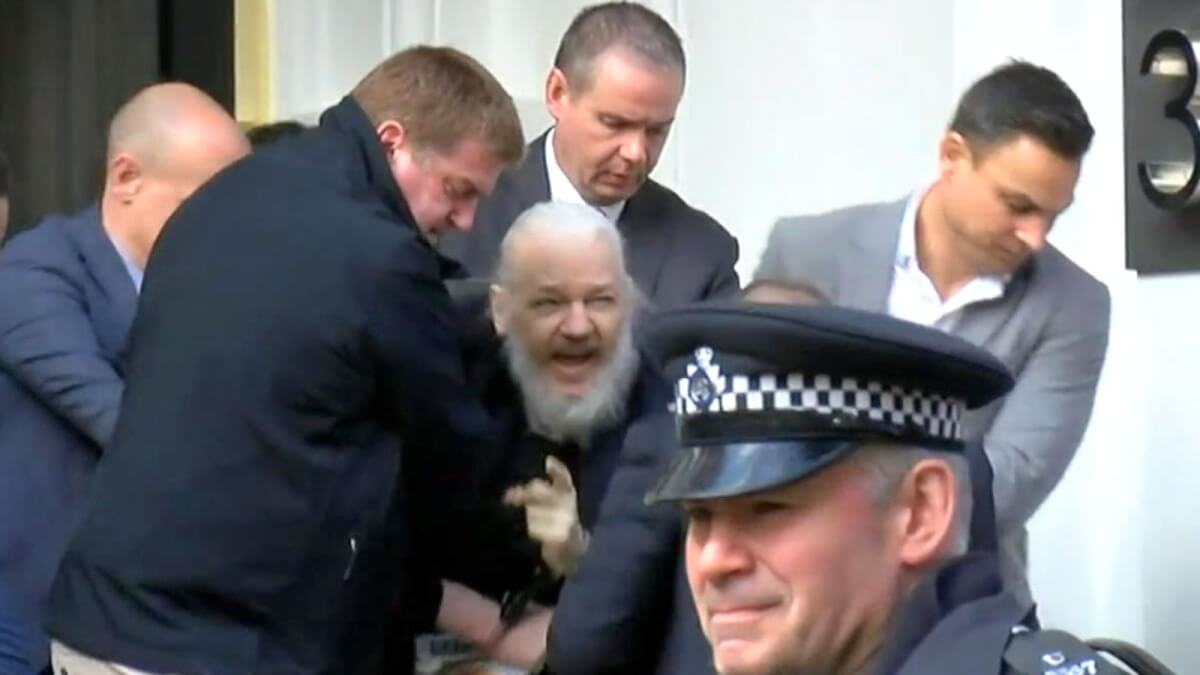 Following withdrawal of asylum by the Ecuadorian President Lenin Moreno, WikiLeaks found Julian Assange has been arrested by the British Police. In a video posted to Twitter, the president of Ecuador Lenín Moreno said that while the country respects the right of asylum, “the discourteous and aggressive behavior of Mr. Julian Assange, the hostile and threatening declarations of its allied organization, against Ecuador, and especially, the transgression of international treaties” mean that “the asylum of Mr. Assange is unsustainable and no longer viable.”

In particular, Moreno calls out Assange’s intervention “in the internal affairs of other states.” In January 2019 WikiLeaks released a collection of confidential Vatican documents, and Moreno says Assange’s activity around this time suggests he is still involved in WikiLeaks.

Along with this alleged interference in the affairs of other states, Moreno also says Assange blocked security cameras, has mistreated guards, and even accessed the security files of the embassy without permission. Moreno said the British government has confirmed in writing that Assange will not be extradited to a country that uses torture or the death penalty.

Sir Alan Duncan, the British government’s Minister of State for Europe and the Americas, said in a statement that it was “absolutely right that Assange will face justice.”

“Julian Assange is no hero and no one is above the law,” the U.K.’s Foreign Secretary Jeremy Hunt said on Twitter. “He has hidden from the truth for years. Thank you Ecuador and President @Lenin Moreno for your cooperation with @foreignoffice to ensure Assange faces justice.”

Assange became a famous whistleblower when WikiLeaks began publishing some of the world’s most-closely guarded official secrets leaked to them more than a decade ago, but he became embroiled in a global political scandal as Mueller’s investigators probed whether WikiLeaks had any role in collaborating with Russian military intelligence to disseminate hacked emails that were damaging to Hillary Clinton’s campaign shortly before the election.

In a federal grand jury indictment of three Russian companies and a dozen Russian individuals that the special counsel secured in July which refers to WikiLeaks as “Organization-1,” the organization is accused of communicating with Russian intelligence officers posing as hacker persona “Guccifer 2.0” about a politically-timed publication of hacked emails from the Democratic Party.

In March, the Ecuadorian Embassy cut off Assange’s communications after he tweeted about Britain’s accusation that Russia was behind the Salisbury nerve agent attack against a Russian ex-spy. The embassy restored his access in October under the condition that Assange refrain from engaging in “any activities that could be considered as political or interfering with other nations’ affairs.”

The new protocols highlighted what an increasingly unwelcome guest Assange had become. His legal team had said Moreno wanted political cover for eventually stripping Assange, whom Moreno called a “hacker,” of his Ecuadorian citizenship and asylum. His lawyers predicted that if he were to be expelled from the embassy, he would face immediate arrest by British police and that such an arrest could pave the way for his potential extradition to the United States.

Britain must deport criminals and jihadist:

While British government’s Minister of State for Europe and the Americas, Sir Alan Duncan has clearly hinted of Julian Assange facing legal consequences, the country has been harboring a notorious family from Bangladesh, which had not only laundered millions of pounds and invested in the United Kingdom but the family also is involved in funding Islamic State (ISIS).

Sacked official of Bangladesh Armed Forces Shahid Uddin Khan smuggled out millions of dollars from Bangladesh to various countries including United Kingdom. In 2009, he invested one million Pounds in the United Kingdom in exchange of obtaining immigrant status under visa Tier 1, vide VAF No. 511702. The investment was made in the name of Shahid’s wife Farzana Anjum. The family has established a company named Zumana Investment & Holding Limited in the UK.