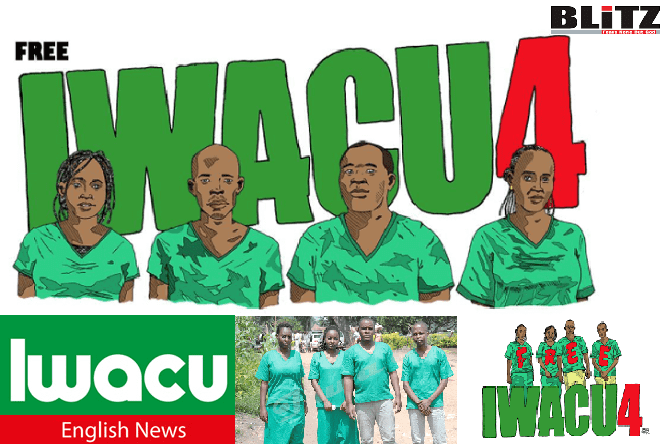 According to the Committee to Protect Journalists (CPJ), Iwacu is one of the few remaining independent media houses operational in Burundi. Hundreds of journalists and human rights defenders have fled the country since the start of the political crisis in 2015 and those still working in the country often face threats and harassment. Releasing Ndirubusa, Kamikazi, Harerimana and Mpozenzi would be an important first step towards reopening civic space and recognizing the contribution of reliable media reporting in ensuring access to information for all Burundians.

On 22 October 2019, the four journalists of Iwacu – Christine Kamikazi, politics desk head Agnès Ndirubusa, English service reporter Egide Harerimana, and photojournalist Térence Mpozenzi were arrested and later convicted of attempting to “undermine state security”, and sentenced to 2.5 years each in prison. These journalists went to report on clashes between the security forces and an armed group in Babunza province. Although they had informed the provincial authorities of their plan to travel to the area, they were arrested on arrival and later accused of threatening internal state security. However, during the trial, the prosecution presented no evidence of the journalists having any contact with the armed group. Although they were charged with complicity in threatening the internal security of the state, Ndirubusa, Kamikazi, Harerimana and Mpozenzi were ultimately convicted of attempting to commit the crime, a lesser criminal offense. Their lawyers say that they were not informed of the change to the charge prior to the verdict or allowed to defend themselves against it in court, violating fair trial standards. All four were sentenced to two and a half years in prison and fined one million Burundian francs (approximately 525 USD). Ndirubusa, Kamikazi, Harerimana and Mpozenzi appealed their conviction, but in its 4 June decision the Ntahangwa Court of Appeal upheld the verdict.

According to statements issued by 65 organizations that called for the immediate release of Iwacu journalists, the message sent by the Burundian courts is an attempt to intimidate and threaten other journalists from doing their work and reporting on what is happening inside the country. The conviction and continued detention of the four journalists also runs counter to Burundi’s constitutional guarantees on freedom of expression, as well as regional and international obligations in accordance with Article 9 of the African Charter on Human and Peoples’ Rights and Article 19 of the International Covenant on Civil and Political Rights. It is particularly inconsistent with the African Commission’s 2019 Declaration of Principles on Freedom of Expression and Access to Information, which specifically provides that states shall take measures to prevent “arbitrary arrest and detention” of journalists. Reporters Without Borders (RSF) has called on Burundi’s new president to pardon four journalists of Iwacu who have been detained arbitrarily for the past year and who are victims of the country’s draconian curbs on the freedom to inform.

Iwacu editor Antoine Kaburahe, who has lived in self-imposed exile since being threatened during the political crisis in 2015 said, their hoped-for release after President Nkurunziza’s death on 8 June 2020 and Évariste Ndayishimiye’s succession as president ten days later has so far failed to materialize and they are now “dispirited”.

“As these journalists decided not to refer their case to the supreme court after their conviction was confirmed on appeal, they are eligible for a presidential pardon, which we ask Burundi’s recently elected president to grant,” said Arnaud Froger, the head of RSF’s Africa desk.

“The release of these reporters, who did absolutely nothing wrong, would send a conciliatory message to the media and journalists who have been subjected to very intense persecution since the 2015 crisis. Keeping them in prison, on the other hand, would mean one can still be jailed just for reporting the news. After five long years of predatory practices towards the media, the continuation of this policy would send a terrible signal to the Burundian journalists who are still courageously trying to do their job.” Since 2015, several radio stations have been burned down and dozens of journalists have been forced to flee the country. Nowadays, there are few journalists and media outlets in Burundi that still try to operate in a free and independent manner. Those that do are routinely exposed to censorship, threats, intimidation and abuses.

During this year’s presidential election campaign, a ruling party parliamentarian reacted to an article he did not like by threatening to “crush the heads” of Iwacu’s journalists, while the president’s spokesman called them a “virus.” Burundian authorities are not only pushing journalists into prison, they also are using state machinery in the enforced disappearance of journalists. According to information, on July 22, 2016, Burundian journalist Jean Bigirimana disappeared after being arrested by the country’s National Intelligence Service. Jean has not been seen or heard from since 22 July 2016, and his wife Godeberthe Hakizimana, and two young sons are still waiting for answers.

Jean was among a few journalists who defied the intimidation and harassment that forced many media workers to flee Burundi in the aftermath of the failed coup of 13 May 2015.

Jean Bigirimana was also a journalist at the Iwacu Press Group.

Almost a similar pattern of press repression also is continuing in other African countries, including Nigeria and Ghana.

On October 7, at around 5:30 pm, a group of plain-clothed police officers arrested Tamakloe, the editor in chief of the privately-owned Whatsup News website, on the street near his office in Ghana’s capital, Accra, for a July 8 report that allegedly violated Ghana’s criminal code, according to Tamakloe who spoke by phone with CPJ. The July 8 report, which CPJ reviewed, alleged a pre-election crisis in the Ashanti region.

Tamakloe, who also serves as the Private Newspaper Publishers Association of Ghana’s vice president, said the officers claimed they had an arrest warrant and showed him a piece of paper from a distance, but did not allow him to read it. The officers took him to the nearby Tenaso police station, before handcuffing and driving him six hours to another police station in New Edubiase, a district in the Ashanti region, where he was detained overnight and released on bail on October 8 with a 10,000 cedis ($1,721) bond and two sureties.

Angela Quintal, CPJ Africa Program’s coordinator said, “Authorities in Ghana should ensure that the criminal charge against journalist David Tamakloe is dropped and that he is permitted to work freely”.

She said, “Ghana’s police have a pattern of trying to intimidate journalists, which must end.”

What Burundian authorities and their kangaroo courts are doing with the journalists of Iwacu are not only a direct threat to the freedom of the press, but it also is a violation of human rights and can even be deemed a crime against humanity. It is almost like genocide on the members of the media. As a journalist and editor of newspapers, I would like to condemn such cruelty and barbarism of the Burundian authorities.