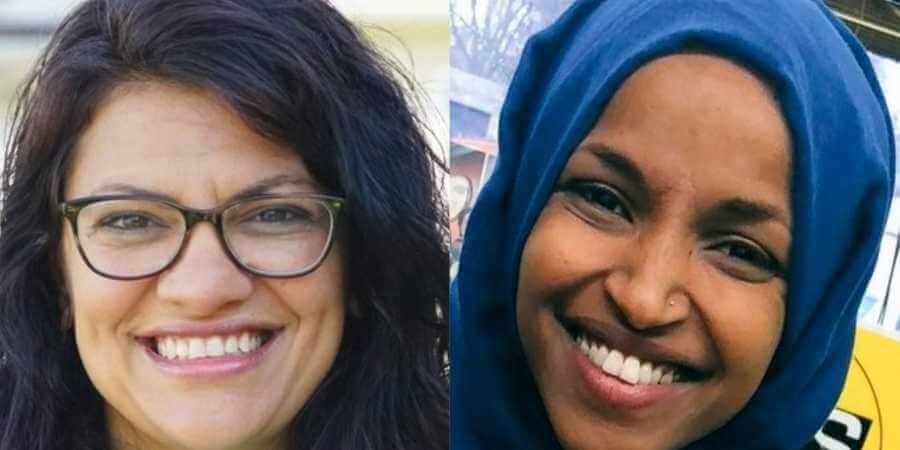 Mega terrorist outfit Hamas is seeing the victory of Rashida Tlaib as their own victory. They are feeling delighted in finally being able putting a footprint right inside the United States Congress. Most of the pro-Palestinian and anti-Israel media are cheering Tlaib’s victory. Her uncle Bassam Tlaib said, “She has become a source of pride for Palestine and the entire Arab and Muslim world.”

Tlaib’s district is home to one of the largest Arab-American populations in the United States. With the victory of Rashida Tlaib in Michigan and Ilhan Omar in Minnesota, Sharia, corruption, and Jew-hatred come to the US Congress. The so-called establishment media will celebrate these victories as triumphs of America’s “diversity”; unfortunately, in reality neither one is worth celebrating.

Rashida Tlaib is a vociferous foe of Israel. With the Democrats now regaining control of the House, Tlaib is likely to be an energetic proponent of the new majority’s vendetta against the Middle East’s only democracy. The House is likely to do all it can to roll back President Trump’s pro-Israel polices, with Tlaib as well as Omar as becoming the public faces of the effort.

According to the JTA, when Tlaib was asked if she would vote against military aid to Israel, Tlaib responded: “Absolutely, if it has something to do with inequality and not access to people having justice. For me, U.S. aid should be leverage. I will be using my position in Congress so that no country, not one, should be able to get aid from the U.S. when they still promote that kind of injustice.”

What kind of injustice? Tlaib, of course, had nothing to say about the genocidal incitement against Jews and Israel that regularly features on Palestinian television. She did say, however, that she favors a one-state, not two-state, “solution” to the Israeli-Palestinian conflict: “One state. It has to be one state. Separate but equal does not work. I’m only 42 years old but my teachers were of that generation that marched with Martin Luther King. This whole idea of a two-state solution, it doesn’t work.”

Indeed it doesn’t. A Palestinian state would be a new base for renewed jihad attacks against Israel. But a “one-state solution” would be even worse, unless that state is the current State of Israel, but that is not the one state Tlaib has in mind. She is calling for an Israeli/Palestinian state that would not be a Jewish State or a homeland for the Jewish people, but a federation in which Palestinians would soon overwhelm Jews demographically.

The hijabed (and therefore pro-Sharia) Ilhan Omar, meanwhile, is even more hateful than Tlaib. According to the Daily Wire, in 2012 Omar tweeted: “Israel has hypnotized the world, may Allah awaken the people and help them see the evil doings of Israel. #Gaza #Palestine #Israel.” Challenged about this tweet much more recently, she doubled down and attacked the man who called attention to the tweet: “Drawing attention to the apartheid Israeli regime is far from hating Jews. You are a hateful sad man, I pray to Allah you get the help you need and find happiness.”

Ilhan Omar has “faced allegations – soon backed by a remarkable amount of evidence – that she had married her own brother in 2009, and was still legally his wife. They officially divorced in December 2017. The motivation for the marriage remains unclear. However, the totality of the evidence points to possible immigration fraud and student loan fraud.” What’s more, she swore to apparent falsehoods in court. It means the United States Congress now has a woman, who is pervert (as she had physical relations with her husband, who is her own brother and she married her own brother with the ulterior motive of committing frauds.

According to Koran, marrying own brother is forbidden and considered as an unforgivable sin. But, according to verified information, Ilhan Omar was having physical relations with her own brother since she was 9 years old. By having physical relations with her own brother and later by marrying him, Ilhan Omar has already disobeyed the Koran. Still she has now emerged as the neo-representative of the Muslims. Isn’t that a great shame for the entire Muslim community?

Both Rashida Tlaib and Ilhan Omar are anti-America and anti-Israel.

With the disturbing news of Democratic Party winning a majority in the House, United States is becoming, like Europe, fertile ground for anti-Semitism and anti-Zionism.

Although there are speculations of President Donald Trump being impeached by the Democratic majority in the House, it is important to consider the following facts.

The President of the United States of America controls foreign policy, with the consent of the Senate (now Republicans have more seats in the Senate than it had following 2016). The President controls trade, treaties, negotiations with the foreign states, defense, and anything he decides that needs approval, the approval is in the Senate and not in the Congress. Senate is controlled by the Republicans, and the new batch of elected members of the Senate are much more Trump allies than those that have left. The Executive has total power, with consent of the Senate, to reduce the size of the bureaucracy, to flood the Federal Courts with Conservative judges that will be there for decades.

The House of Representatives controls financial issues such as taxes, budget etc. On the issue of Middle Class Tax Cuts and Infrastructure, most Democrats are in agreement with President Trump and anything Congress pushed for in those two areas and that Donald Trump wants will go through the Senate as well. So, on these issues, Congress really cannot create real obstructions to the President.

And if the Democrats use their new power in the House to do nothing but pursue foolishness like impeachment which would never succeed, they will only be hurting themselves for 2020.

As to the Presidential election in 2020, Democrats do not have any real candidate who can face Donald Trump. Moreover, during the next two years, Democrats will face lots of public wrath due to madness of Rashida Tlaib, Ilhan Omar and insane socialists like Alexandria Ocasio-Cortez.

In brief, Democrats majority in the House cannot stop President Donald Trump. In 2020, Trump will get re-elected much comfortably than in 2016. It is a blessing for the Republican Party that Democrats now have majority in the House. During next two years, Democrats will exhibit lots of madness capitalizing their majority, which will, for sure, annoy the voters who has enthusiastically voted for the Democratic Party’s candidates.