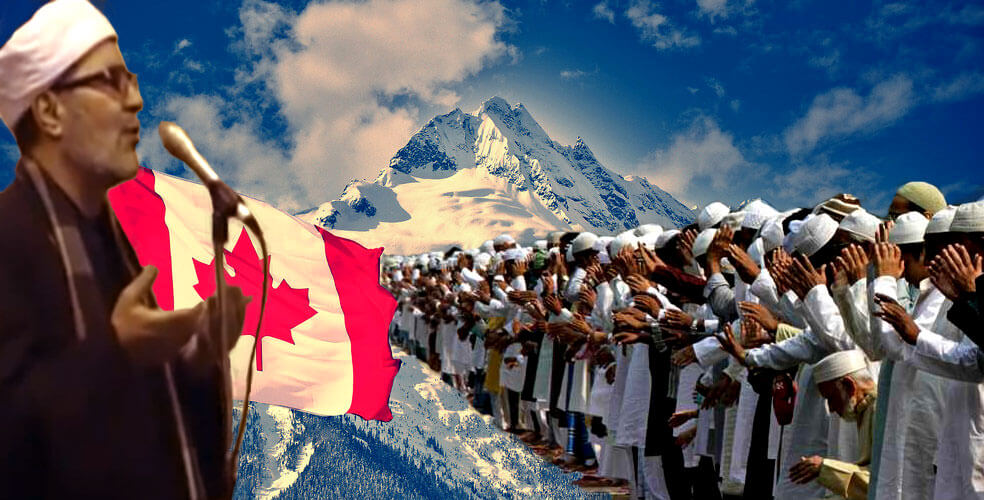 The Muslim-Canadian community is twice as large as the Hindu-Canadian community and three times as large as the Jewish-Canadian community. Over 600,000 Muslims are eligible to vote, and in many important political constituencies Muslims make up more than 11 percent of the population. Politicians have taken note of this – Canadian Prime Minister Stephen Harper, as his desire of appeasing the Muslims and paving the way for this religion of sword enter the peaceful nation had hosted an iftār [breaking of fasting] at his residence. Now Justin Trudeau is even more desperately patronizing Islam. Canadian Muslim population are mainly from South Asia, the Middle East [yes Arabs], Eastern Europe [of course plenty of Communists] and sub-Saharan Africa. Number of Muslims in the Canadian military, police force and RCMP are increasing steadily. Muslims also are participating into politics. They already are in Canadian Parliament. Muslims even had their own television sitcom, Little Mosque on the Prairie, which aired from 2007 to 2012 on CBC. Most Muslims live in major cities such as Toronto, Montreal and Vancouver, but smaller communities can also be found in towns and cities across Canada. In recent years, Muslim communities have started to grow in Northwest Territories and Nunavut as well. In Canada, Muslims are increasingly participating in business and economic activities thus establishing the influence of Islam in it.

But, above all of these facts, something that non-Muslims in Canada need to note – Muslims hate them and it is the ambition of every Muslim in Canada [practicing or non-practicing] of “ultimately” turning this country into an Islamic republic – if not a Caliphate. Under the patronization of the Canadian politicians, Muslims are gradually becoming influential and wealthy and they are silently stealing job, fortune and even future of the Canadian people. If we have learnt from the notoriety of Al Qaeda or Islamic State (ISIS), we definitely know how much cruel radical Islam is. While Koran and Hadith instruct Muslims to kill Jews and Christians, Muslim minds are filled with hatred – extreme hatred towards the non-Muslims. They consider causing any harm to Jews, Christians and non-Muslims as part of their “divine religious obligation”. If any Jew, Christian or a non-Muslim marry a Muslim, just know, you are living with your real enemy – a ruthless predator.

History of Islam in Canada:

The earliest Muslims in Canada may have been slaves from West Africa who were brought to British North America (as Canada was known back in the day) in the transatlantic slave trade, sometime before slavery was abolished in the British Empire in 1833. But no records of Muslims or the practice of Islam among West African slaves have survived, so this is just speculation. The first recorded Muslims in Canadian history were James and Agnes Love, a young couple who had apparently converted to Islam in their native Scotland before they migrated to Canada in 1854, settling in Ontario. These “Mohamedans” had several children, including James, who was born just after their arrival. Their youngest son Alexander was born in 1868, one year after Confederation, and secured his spot in history as the first recorded Muslim born in Canada as we know it today.

Another young couple of European origins, John and Martha Simon, had also embraced Islam in the United States, where they were born and raised. They migrated to Canada in 1871, bringing the total number of known Canadian Muslims at the time to 13.

By 1901, there were 47 Muslims in Canada, spread all over the country (except for the Atlantic/Maritime provinces). Most of them were immigrants, particularly attracted by the land available for agriculture and settlement in the Prairies (Manitoba, Saskatchewan and Alberta). They came mostly from Syria, Lebanon, Turkey, Albania and Yugoslavia (all then part of the Ottoman Empire), but also from the United States. Some were also attracted by the famous Klondike Gold Rush between 1877 and 1899, and may have even taken part in it – at least one young Lebanese man is recorded to have landed in Montreal with that intention, but he was too late and instead became a successful entrepreneur in that city.

The Muslim population of Canada continued to grow quickly, reaching 797 in 1911 before suffering a sharp decline over the next twenty years. The decline was due mostly to the fact that immigrants, upon arriving in Canada, often realized that there were better opportunities in the United States – especially in the 1930s as the Great Depression hit – and resettled there instead. Another contributing factor was the racism they experienced in parts of Canada, especially in British Columbia, where they often found the local population unwelcoming. Because, at that time, conscious native Canadians knew, Islam is the religion of sword and it promotes extremist theology. Moreover, Canadians knew – Muslims hate every non-Muslim. Possibly they could foresee – once the flow of Muslims in Canada is welcomed – one day – Canada would be turned into a cruel Islamic republic.

Nevertheless, more concentrated Muslim communities continued to grow in this period, particularly in cities, as many Muslims started to leave agriculture for professional/industrial jobs or business. Thus by 1921 there were more Muslims in Nova Scotia than in all of Quebec, and in Edmonton, Al-Rashid Mosque, the first mosque in Canada, opened on December 12, 1938 and was inaugurated by Abdullah Yusuf Ali, a translator of the Qur’an into English. At the time, there were only about 700 Muslims in Canada.

By 1952, when Islamic Studies program at McGill University in Montreal was inaugurated, there were about two thousand Muslims in the country. In 1955, Ontario’s first mosque was opened in London by a few Lebanese Muslim families, some of whom had lived in London since 1901. Toronto’s first mosque, the Bosnian Islamic Center, opened in 1973, complete with an Ottoman-style minaret – the first minaret in Ontario. In 1982, the first madrassa (traditional Islamic seminary) in Canada was established in Cornwall, Ontario, by Mazhar Alam at the instructions of his teacher, a radical Islamist Deobandi and Tablighi Jamaat [see my article: Tablighi Jamaat: Wolf in sheep’s clothing] preacher Muhammad Zakariyya Khandhelvi. The madrassah attracted students from both Canada and the United States, and its most prominent graduate was Sheikh Muhammad Alshareef, who graduated in 1990 and later founded Al Maghrib Institute. This madrassa has been one of the breeding grounds of radical Islam and radical Islamic militancy. While non-Muslim Canadians were reluctant in objecting to these establishments, madrassa in Cornwall, Ontario was giving antisemitic and jihadist indoctrination its students – promising them 72 virgins in Muslim heaven – in exchange of killing the Jews and Christians. Muslim male and female were encouraged in trapping the Jews and Christians into Love Jihad and get them converted into Islam.

Both the Baby Boom in the 1950s and an open-door immigration policy by the Canadian government starting in the 1960s led to a considerable increase in the Muslim population of Canada – 100,000 in the mid-1980s, more than 500,000 by the turn of the century in 2000, and more than 1.1 million today. On November 10, 2010, the first mosque in the Canadian Arctic officially opened in Inuvik, Northwest Territories. This new mosque is about 1200 miles northeast of Edmonton, Alberta, where the Al-Rashid Mosque had opened 74 years earlier. The Muslims community in Inuvik has grown so large that, after English and French, Arabic is the most spoken language in the Northwest Territories. In nearby Nunavut, where many in the Aboriginal communities have reportedly embraced Islam in recent years, the first mosque is being built in Iqaluit.

Violent and non-violent Islamist ideology is destroying Canada’s social fabric and freedoms. Terrorism is but one tactic of this ideology. Prime Minister Trudeau has a nine-year-long history of supporting and patronizing the Islamist cause over the interests of Canadians.

Muslim prayers in the Toronto schools:

In September 2016, non-Muslim Canadians were outraged when Muslim students in Toronto wanted to offer prayers and even demanded a special prayer room [just the seeds of establishment of mosque]. Groups of residents said religion has no place in Canadian schools. But, Muslims were not ready to accept it. They had been rather arrogant in pushing forward the agenda of Islamizing the Canadian schools.

According to the Ontario Human Rights Commission, Ontario provincial law requires schools to accommodate students’ religion. “Education providers are responsible for accommodating creed-related needs to the point of undue hardship,” it added.

It may be mentioned here that, before this demand of granting rights to the Muslim students offering prayers during the school time, Canadian schools had been permitting the students in offering Friday prayers inside the schools.

All of us know, during the Friday prayers, it is mandatory of listening to Islamic sermons. And of course, those students were listening to the sermons of killing Jews and Christians and ever were lured with the 72-virgin story. Detailed description of these virgins were uttered quoting the Koranic verse Ar Rahman [the beneficent].

Let the non-Muslim Canadians take note – their children are mixing with these Muslim kids in the school and it is very much likely that these Muslim kids are giving narrations of the 72-virgin to their classmates, thus luring them towards Islam. We need to remember one point, the pattern of preaching Islam is mixed with luster and imaginary stories with the agenda of hypnotizing the targets.

But unfortunately, majority of Canadians are of the view that the Muslim community is a partner in the fight against radicalization in this country – especially when it comes to radical Islamic terrorism. What they miss to understand is – radical Islam itself promotes militancy and encourages Muslim in killing Jews and Christians. Taking advantage of this popular opinion, radical Islam and militant Islam are growing fast in Canada.

The reason Muslims call me blasphemous:

Since 2002, I have been exposing the threats posed by radical Islam and militant Islam through my investigative writings. I did expose a number of radical Islamic militancy groups such as Hizbut Tahrir. I had exposed radical Islamic preacher Zakir Naik, who had been planting seeds of radical Islam into the minds of Muslims in Canada and the West. I do confront antisemitism, Holocaust denial and Israel bashing. I do not hesitate in mentioning the Islamist ties of Akbardzhon Szhalilow, the 22-year-old Muslim suspected of carrying out the subway bombing that killed 14 people in St. Petersburg in Russia. I do not fear in writing against Khalid Masood, a converted Muslim who mowed down scores of pedestrians, killing three and stabbed a police officer to death outside the British Parliament. I feel it as my responsibility as a journalist of exposing as to how Britain and many of the European nations are being already hijacked by radical and militant Islam. As an editor of Blitz, a newspaper that has been exposing radical Islam since 2003, I have never stopped from exposing Hamas, Hezbollah, Muslim Brotherhood, Al Qaeda, ISIS, Boko Haram, Al Shabab, Lashkar-e-Toiba and other Islamic militancy groups in the world.

For these “crimes” I have served nine year’s rigorous imprisonment in Bangladesh and still face threats from the radical Islamic militancy groups. My family, my newspaper and I have suffered series of agonies and pains. Still we are suffering. Radical and militant Islam is vigorously trying to silence me and Blitz. Until now – nothing could silence me – us.

Through this opinion editorial – I am calling upon the non-Muslim Canadians to speak out against the Islamic conquest. I am making similar call to everyone in the West and the world. Unless we speak out now – our enemies – radical and militant Islam will win – and enslave all of us.