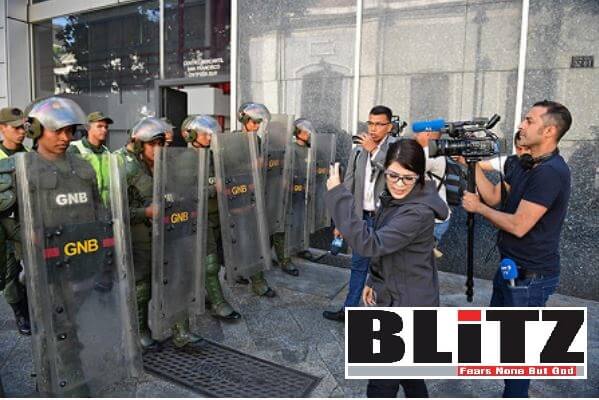 A year after disputed national elections in Venezuela, and with access to information growing ever-scarcer, the country remains in a political and economic crisis. Conditions for the press have deteriorated further since January, when Juan Guaidó, the head of the opposition-led national assembly, declared himself interim president.

Both local and international journalists covering the Venezuela crisis are increasingly at risk from authorities under Nicolás Maduro and armed groups known as colectivos. CPJ has documented how authorities briefly detained journalists and their fixers, threatened reporters at gunpoint, and imposed intermittent blackouts, internet outages, and blocking of outlets. Earlier this month, both the BBC and CNN reported that they had been censored in the country.

The risk of injury or attack while covering protests was highlighted on April 30, when security forces under Maduro used tear gas, water cannon, and live ammunition to disperse opposition activists. In response, CPJ issued an updated safety advisory for journalists.

CPJ is also aware of incidents where opposition groups and their supporters harassed and attempted to discredit journalists.

CPJ’s calls to the office of the president and vice-president were not answered.

To further understand the challenges for the media, CPJ spoke with three journalists about their experiences covering the crisis. Their answers have been lightly edited for length and clarity.

The situation for journalists is not really defined. It has been uneasy, with certain risks from those who are not friendly to journalists, like the colectivos or la guardia nacional [a branch of the Venezuelan armed forces]. It can sometimes get ugly for us. There’s an element of harassment in general. For the press, it’s much of what we have seen: There is general obstruction, general hostility, although [the authorities] do seem to be letting the press in.

The press, however, is very exposed. There aren’t that many foreign journalists and everybody knows where they are. Caracas is a very dangerous place, and pretty much everyone there has been robbed or questioned. It is a somewhat hostile environment and people are behaving accordingly. They don’t go out at night, they don’t walk into the barrios. Right now, Caracas has an edge that you can’t find anywhere else in Latin America. You feel in Venezuela the possibility of a looming conflict that is really fueled by the rhetoric inside and outside the country. You feel the standoff with global powers.

You are working in a place where the regime is doing things that they don’t want you to know about. It feels like El Salvador in the 1980s. The colectivos are active in a way that they weren’t before. When you see them outside the National Assembly and police don’t do anything about it, you know something has changed.

It’s the M.O., the modus operandi, that I saw last summer in Nicaragua and it’s also similar to Crimea. It’s thugs being used in a more blatant way. It’s the same playbook I’ve seen over and over again.

I suspect things will get worse and more tense, and I also fear the risks will increase for journalists. It’s a very polarized atmosphere. The regime is not behaving all in one way. You get the impression that there are different factions. The colectivos are being given more rein to act, and there is really the possibility that they could operate their own activities. And then it is highly likely that you could be taken. In Venezuela, it all becomes possible. There is less and less recourse, no diplomats. And a fervent social media that can really play both ways.

There is a lot of fear.

My work is mainly on the streets of Venezuela. These streets are dangerous not only for politicians or human rights activists, but they are really, really dangerous for journalists. This is because of the paramilitary colectivos, but also because of the police and military groups that are chasing journalists. The government imposed a rule that journalists need a visa when they come to work in the country, but there’s a 30-day wait required. Most journalists cannot wait that long, so they come in as tourists, which has brought a lot of trouble. Police and guards will ask if you have a visa and you can be interrogated at the airport.

Nobody actually trusts anyone. When you go out into the streets as a journalist, you don’t know if you should wear your press ID. You don’t know if that will make you a target, or if someone who doesn’t like the media will attack you. The streets are full of uncertainty for us in that matter.

The situation is that really, we are living in a country that is divided into two halves. We have two presidents, we have two judiciary courts, we have two parliaments, and we have two halves of the country, and each one believes in their president, their judiciary court, and their own parliament. It can be really hard to understand, and it can be even harder to explain it to foreign readers. You have to give lots of background in order to explain the current situation. What’s happening now is a consequence of something that happened, 15, 20 years ago, for example. The biggest challenge Venezuelan journalists have now is to understand what is really going on here and transmit the truth. If not the truth, then transmit the situation in the most honest way.

Obviously, I feel a bit exposed when working here in my country and when I’m working with foreign journalists. When we go to street protests, we obviously have to go with our equipment, bullet-proof vests, gas masks, and helmets. It is dangerous. Last week, we saw many journalists injured while covering the protests.

My biggest concern is that this polarization continues and there comes a time when you cannot go out into the streets, not even to report anything. Also, that they just stop allowing foreign journalists to come in, and that there will be more imprisonment. So far, they [mostly] just sent specific correspondents to prison, but they released them after a few hours.

It’s dangerous here, but journalists still come. It’s also dangerous for journalists such as me, who live here. We are Venezuelans and we are supposed to be able to do our job in our country. We face many obstacles.

The situation for the press on the ground is deteriorating. Along with my apartment being raided, being detained, and later deported from the country, several other journalists have been targeted by authorities and paramilitary groups (colectivos) in the past few months. Many other journalists have been detained and later released or deported while attempting to report in sensitive areas, such as along the border with Colombia or outside of military bases. In one case not long after my arrest, a prominent Venezuelan blogger, Luis Carlos Díaz, was arrested. It appears authorities needed a scapegoat for the widespread blackouts affecting the country.

Authorities have singled out journalists in a few cases, including mine. Most journalists who have trouble with authorities are detained while attempting to take photos or use other equipment in so-called “security zones,” such as the bridge that separates Colombia and Venezuela, or outside of the presidential palace. Taking photos is prohibited by officials in these areas. Some journalists have been robbed by colectivos and specifically targeted during protests.

After being deported from Venezuela, I returned to Colombia. I would be worried about authorities targeting me again should I return to Venezuela. I’m also not sure whether the supposed investigation into treason, espionage, and extraction of military artifacts against me has been resolved.

I essentially started my reporting career in Venezuela, so I haven’t had many other experiences to compare. But I suspect the polarization in Venezuela creates a situation where reporters must be wary of all sides of the conflict. Journalists have been attacked in the past few years by opposition protesters, by authorities, by paramilitary colectivos, and by pro-government protesters. The situation will likely continue to deteriorate for journalists as the political standoff continues and both sides attempt to gain momentum.