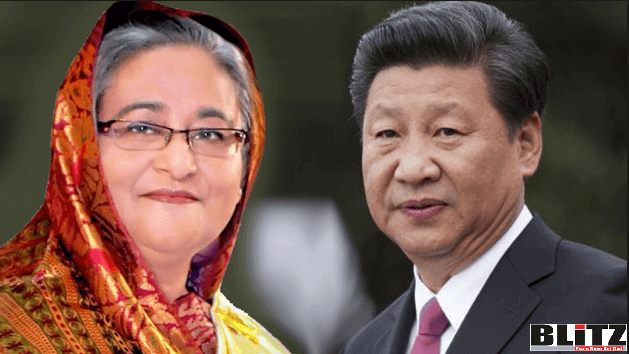 Beijing is going to roll red-carpet and assure all-out cooperation to Bangladesh during the upcoming visit of Prime Minister Sheikh Hasina. During the upcoming trip, several protocols and agreements will be signed between the two friendly nations.

China is looking for strengthening existing relations with Bangladesh as the US-China trade war has been intensifying. At the same time, the United States also is coming hard on India, which has been considering itself as a global power, especially ever-since Narendra Modi became the Prime Minister in 2014. The US-China and US-India trade war is going to greatly benefit countries like Bangladesh, Vietnam and Chine. According to analysts, the impending effect of the trade war on supply chain dynamics and investment patterns could help these countries emerge as potential winners of the conflict.

For Bangladesh, China and the United States have been long-time, stable trade partners. The volume and values of trade are very significant in both countries. However, the nature of trade with both countries is different. Bangladesh’s top import partner is China, with Bangladesh importing over $15 billion in Chinese goods, as of 2017. Meanwhile, the United States is the second largest destination for Bangladesh’s exports, taking in more than $5.8 billion in 2017 (Germany was the largest destination at just over $6 billion).

The garment sector, which accounts for 80 percent of Bangladesh’s total exports, is expected to benefit the most. As the trade war escalates, American retailers are placing more work orders in Bangladesh in an effort to offset increasing tariffs on goods manufactured in China. According to the Bangladesh Foreign Trade Institute, Bangladesh enjoyed a 6.46 percent growth in market share in the U.S. market during the first three quarters of 2018.

Bangladesh is the top choice to the Chinese entrepreneurs

To avoid higher tariffs, factories are relocating from China to elsewhere in Asia. Bangladesh has more competitive advantages than its competitors such as Cambodia and Vietnam. Due to the presence of strong unions, setting up factories in Cambodia is more challenging. Moreover, in contrast to the 160 million Bangladeshis, Cambodia has a population of just 16 million, which gives Bangladesh a competitive edge in this labour-intensive industry. Due to higher wages and production costs, Vietnam also looks less attractive to investors. The minimum wage in Bangladesh is currently $95 per month, which is almost half the $182 per month it is in Cambodia and $180 per month in Hanoi and Ho Chi Minh City.

Bangladesh can also benefit by increasing imports from the United States. According to the U.S. Farm Bureau, soybean exports to China declined by 97 percent after China’s tariffs on U.S. soybeans came into effect. At the moment, Bangladesh imports 2 million tons of crude vegetable oil, of which 30 percent or 600,000 tons is soybean, 98 percent of those soybean comes from Argentina, Paraguay, and Brazil. If the country can redirect its supply chain from Latin America to the United States, it may have the potential to supply oil to consumers at cheaper prices without sacrificing profits in the long-run.

Moreover, being the 51st largest trading partner of the United States, Bangladesh enjoys $4.0 billion trade surplus. One of U.S. President Donald Trump’s hobby horses is going after trade surplus countries. By importing soybeans from the United States, Bangladesh can benefit both by getting goods at a cheaper rate and reducing the trade deficit; this may ultimately contribute to stronger bilateral relations. Furthermore, Bangladesh and other low-income countries in South Asia face U.S. duties of 15.2 percent of the total value of exports, which has a possibility to ease if the United States wants to increase imports from these countries to minimize its gap from China.

The majority of Bangladesh’s steel demands come from importing scrap iron from United States and its domestic ship-breaking industry. However, the U.S. imposed a 25 percent tariff on all steel imports in March 2018, in efforts to revitalize its declining steel industry. This action led U.S. suppliers of scrap iron to store their reserves in anticipation of higher tariffs.

Consequently, Bangladesh has seen a significant rise in the price of rods, an important product required for its many infrastructure projects.

In 2017, Bangladesh scrapped 25 percent of the ships dismantled worldwide. In light of growing development projects, the country might craft an industrial policy to develop its shipbreaking yards, hoping to source a greater amount of cheaper steel domestically, which is already providing more than half of the country’s steel supply.

Furthermore, as a member of Belt and Road Initiative (BRI), it is more meaningful for China to increase investment in Bangladesh in those sectors which are affected in China by the trade war. Beijing’s support of Bangladesh was evident in the 27 agreements for investments and loans signed by the two countries – in the amount of $24 billion – when President Xi Jinping visited in 2016. Net FDI from China into Bangladesh exploded after Xi’s visit. It increased to $506 million in the 2017-18 financial year, which was only $68.5 million in 2016-17.

Since Belt and Road Initiative (BRI) is the brainchild of President Xi Jinping and since India has been violently opposing to BRI, it is anticipated that President Xi will find his best ally in Sheikh Hasina in implementing this wonderful project. It may be mentioned here that, India has been consistently putting pressure on Bangladesh to walk-out of BRI. But, Bangladesh did not pay any heed to it. With the agenda of putting pressure on Bangladesh, some pro-Indian individuals and organizations are regularly organizing seminars and symposiums opposing the Belt and Road Initiative.

Chinese policymakers are aware of Bangladesh Prime Minister Sheikh Hasina’s leadership qualities and statesmanship. They also are aware of the fact that Sheikh Hasina is one of those very few leaders in the world who would keep commitments under any circumstance. For this reason, China is wholeheartedly willing to increase its participation in Bangladeshi economy and infrastructural development.