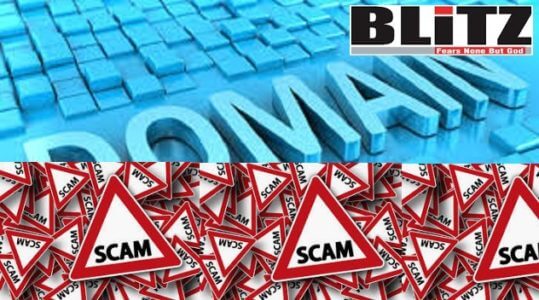 Following over 250 million cyber attacks on the Blitz site only in a day and subsequent attacks, which had been effectively foiled by the IT team of this newspaper, a fraudulent Chinese company has made a foul bid of extorting money from this newspaper by threatening of granting similar domains to a Chinese company.

According to information, on August 6, 2019, a Chinese company named Kaiqian Limited had submitted an application with China Registry (Head Office) seeking domain names weeklyblitz.cn, weeklyblitz.com.cn, weeklyblitz.net.cn and weeklyblitz.org.cn. Subsequently, Service & Operations Manager of China Registry, Todd Liu, Phone +86-02164193517, Cell: +86-138-16428671 sent an email to the editor of this newspaper stating: “This email is from China domain name registration center, which mainly deal with the domain name registration in China. On August 6, 2019, we received an application from Kaiqian Ltd requested “weeklyblitz” as their internet keyword and China (CN) domain names weeklyblitz.cn, weeklyblitz.com.cn, weeklyblitz.net.cn and weeklyblitz.org.cn. But after checking it, we find this name conflict with your company name or trademark. In order to deal with this matter better, it’s necessary to send email to you and confirm whether this company is your business partner in China?”

The office of China Registry (Head Office) is located at 6012, Xingdi Building No. 1698, Yishan Road, Shanghai 201103, China. Name of the sender of the above email is Todd Liu, Service & Operations Manager.

On investigation, it was proved that China Registry is a scammer, whose name appears in the list of scammers from the Asian countries in ProDomains website.

This newspaper has already contacted China Internet Network Information Centre (CNNIC), which is the official Chinese government body with this responsibility. The CNNIC is a non-profit organization with English and Chinese language capability authorized by the Ministry of Information Industry (MII) to operate and administer China’s domain name registry for China’s country code Top Level Domain known as “.cn”. Based in Beijing, all .cn domain name registrations are centralized through the CNNIC.

Commenting on the email from China Registry (Head Office) an official said, these are scammers and they generally keep on cheating various companies around the world with similar emails. But the incident of ‘China Registry’ sending email to an internationally known newspaper like Blitz, it seems that some vested interest group must have joined hands with it with the ulterior motive of putting pressure on the newspaper, most possibly being aggrieved any of the reports published in it.

It may be mentioned here that, Blitz has been exposing several untold facts centering Princess Haya Bint Al Hussein as well as the murder of Sheikha Latifa Bint Al Maktoum. Moreover, this newspaper has already exposed several fraudsters including David Haigh, Tiina Jauhiainen and Essabri Marcus.

Commenting on the email from China Registry (Head Office), an IT expert in China said, this company was actually trying to extort money from the Bangladeshi newspaper by telling the story of a non-existing entity such as Kaiqian Ltd.

Earlier, the same group of scammers was using another company named titled CN Registry (Head Office) with a different website cnregistry.org.cn. It was using several names as Service & Operations Manager including Steve Liu.