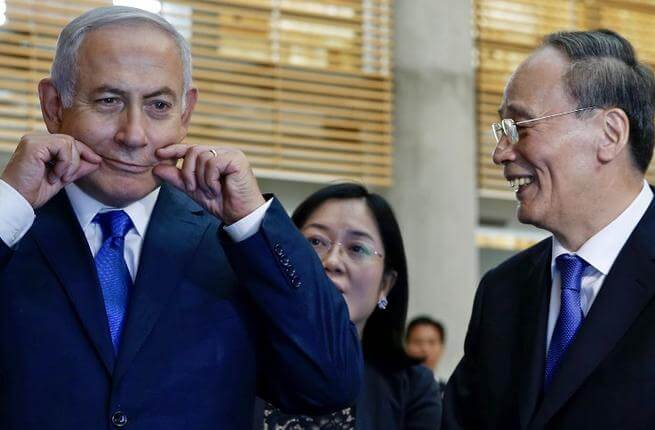 In a sign of the importance Beijing assigns to ties with Jerusalem, China’s powerful VP, Wang Qishan, made a visit to Israel last week. He is the highest-level Chinese official to visit since then-president Jiang Zemin visited in 2000. Wang is known as a “firefighter” and is a close ally of President Xi Jinping, the most powerful Chinese leader since Chairman Mao.

Last week, Chinese VP Wang Qishan led a large delegation to Israel to comprise the Chinese side of the fourth China-Israel Innovation Committee conference. The delegation included Jack Ma, co-founder and head of the Alibaba Group, one of the world’s largest e-commerce companies. The conference was hosted by Israeli PM Benjamin Netanyahu’s office.

The event was held in collaboration with the Israeli Ministry of Culture and Sport and the Peres Center for Peace and Innovation. It was designed to highlight Israel’s technological innovation in the areas of digital health, food and agriculture technologies, and cybersecurity.

Wang was recently appointed the Chinese head of the joint committee. Netanyahu, who is also Israel’s Minister of Foreign Affairs, is the Israeli head. The initiative aims at providing a framework for joint ventures between Israeli and Chinese government ministries. The appointment of Wang Qishan as the Chinese head illustrates the importance Beijing attributes to innovation and technology cooperation with Israel.

The committee was established in 2014 to bolster Israel-China cooperation in several domains related to innovation cooperation and involves ministries and government agencies from both countries, as well as leading universities and research institutions. The initiative has been meeting annually since 2015. Last year, former Chinese vice-premier Liu Yandong met Netanyahu in Beijing for the committee’s third meeting, at which time agreements were signed on medicine, science, and intellectual property.

Israeli-Chinese trade reached nearly $10 billion in 2017, more than double the figure of a decade ago. This trend appears to be accelerating, with Israeli exports to China increasing dramatically by 62% in the first eight months of 2018 compared to the previous year (from $2.14 billion in 2017 to $3.5 billion). Imports from China increased by 10% (from $4.45 billion last year to $4.9 billion in 2018). China and Israel have deepened their relationship in recent years with increased trade and investment, particularly in technology and infrastructure projects, including the expansion of the Haifa and Ashdod ports, the construction of the Carmel tunnels in Haifa, and the building of the Tel Aviv light rail.

China has also invested heavily in Israeli hi-tech. According to Israel-based market research firm IVC, the number of Chinese players investing in Israeli tech companies nearly doubled between 2013 and 2017, though they are still relatively small players and tend to focus almost exclusively on strategic investments. In 2017, around one-third of investments in Israeli hi-tech were from China and Hong Kong. The high-profile tech investments include Chinese gaming company Giant Network’s $4.5 billion acquisition of Israeli games developer Playtika in the artificial intelligence field, pending Chinese regulatory approval. Many of these companies are hi-tech start-ups in areas such as big data.

The visit of such a high-ranking Chinese official to Israel symbolizes the importance both capitals place on their countries’ relations. Israel could play a critical role in advancing Beijing’s “Made in China 2025” initiative, a strategic plan intended to turn China into a major manufacturing power that could rival the US, with a special focus on advanced technological domains such as automated machines and robotics, aerospace and aeronautical equipment, agtech, and new-energy vehicles. Israel is considered a world leader in chip design and manufacturing, and Israeli technologies can help to advance both the Chinese initiative and the two states’ partnership.

However, they must overcome several external and internal obstacles. The first is the current tensions between China and the US – a key ally of Israel’s – over trade and tech. Jerusalem needs to be careful that its technological collaboration with Beijing does not harm US national security. Second, Shaul Chorev, the former chairman of the Atomic Energy Commission, pointed out that Israel needs to create a government mechanism to ensure that Chinese investments do not pose a risk to Israel’s security interests. The granting of permission to the Shanghai International Port Group (SIPG) to manage a new private seaport in Haifa in 2021, for example, which will bring a Chinese presence to one of the region’s strategic harbors, could limit cooperation with the US Navy. Finally, Israel’s Channel 10 reports that earlier this year, Netanyahu was considering forming a new government mechanism to oversee Chinese investment in Israel and to prevent takeovers of large Israeli corporations. Further complicating the relationship is Beijing’s regional partnership with countries like Iran.

Dr. Mordechai Chaziza is a senior lecturer in Politics at Ashkelon Academic College, specializing in Chinese foreign and strategic relations.