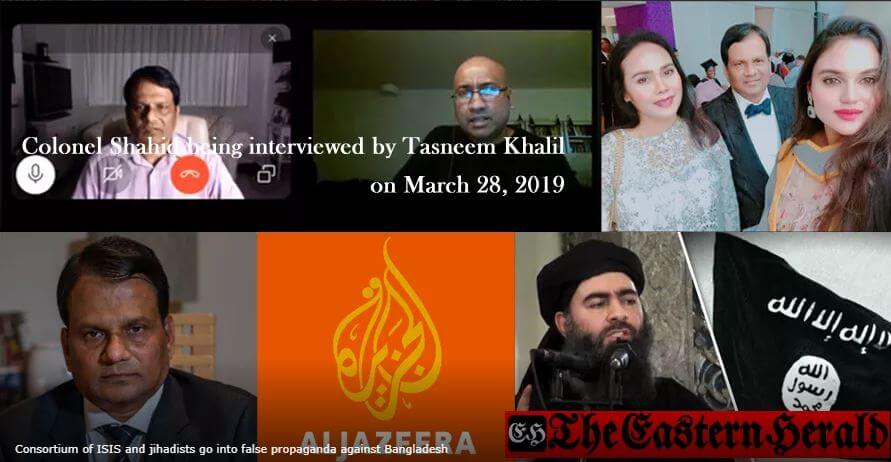 For the past many weeks, a financier of Islamic State (ISIS), Shahid Uddin Khan and his hired cohorts are continuing massive propaganda against Bangladesh – more precisely country’s top-most security agency Directorate General of Forces Intelligence (DGFI) and internationally acclaimed anti-militancy journalist and editor of Blitz, the most influential newspaper with the ulterior agenda. According to information, Lt Col (sacked) Shahid Uddin Khan smuggled out millions of dollars from Bangladesh to various countries including United Kingdom. In 2009, he invested one million Pounds in the United Kingdom in exchange of obtaining immigrant status under visa Tier 1, vide VAF No. 511702. The investment was made in the name of Shahid’s wife Farzana Anjum. The family has established a company named Zumana Investment & Holding Limited in the UK.

United Kingdom had never inquired about the legality of the money Shahid and his family had invested, although it is learnt from various sources in Bangladesh that the family had never taken any permission from the Bangladesh Bank for repatriating such a huge amount of money.

On the other hand, Tasneem Khalil, an unknown junior reporter in Bangladesh, who has the past track record of appeasing radical Islam, Palestinian terrorists and Hamas made false claim of being persecuted by DGFI and sought political asylum in Sweden. According to information, most of the members of Khalil’s family are notoriously anti-Semitic and radical Muslims. Recently this man was hired by Lt Col (sacked) Shahid Uddin Khan as a propagandist.

Tasneem Khalil and Shahid Uddin Khan are enjoying patronization from terror-network Al Jazeera. Recently Al Jazeera wrote a defamatory article against Bangladesh and DGFI with fictitious and false information. Later the content though had been uploaded by Shahid Uddin Khan in his YouTube channel; recently those contents had vanished because Shahid’s criminal records are being gradually exposed by Blitz. According to British law, if any individual is found in money laundering, stern actions are taken by the authorities. It is learn from verifiable sources, British authorities already are investigating the visa Tier 1, vide VAF No. 511702 of Shahid Uddin Khan, his wife Farjana Anjum and daughters and stern actions would be taken against them soon. The authorities may deport this notorious ISIS-funder family to Bangladesh, where they are currently facing numerous charges of serious crimes.

Through his entire career, Tasneem Khalil has a dubious past. In Dhaka he is known as a damn liar and opportunist. For years he was maintaining links with anti-Semitic individuals and organizations, which had turned him into blue-eyed darling of Al Jazeera. Sitting in Sweden, he now is directly engaged in criminal conspiracy against Bangladesh as a hired collaborator of Shahid Uddin Khan. It is also learnt that Shahid, Tasneem and few of the members of this racket are actively trying to stage a coup in Bangladesh by giving instigation to several individuals as well as military personnel.

The Eastern Herald contacted National Crime Agency (NCA) in the United Kingdom to know if they have started investigating the case of Lt Col (sacked) Shahid Uddin Khan, his wife Farjana Anjum and daughters specific case of money laundering. The organization said, the matter actually needs to be brought into the attention of NCA in written form although they have already received copies of several reports published by Blitz on this matter. According to NCA, even a responsible individual from Bangladesh or United Kingdom can directly write with specific allegations, which would help them in initiating the investigation.

Commenting on Tasneem Khalil, Blitz editor and internationally acclaimed anti-militancy journalist Salah Uddin Shoaib Choudhury said, “This boy has exposed his face by giving space to a dirty man like Shahid Uddin Khan, allowing the later in uttering lies on an arranged so-called interview on Tasneem’s Facebook account. I have never heard of any person named Tasneem Khalil in the past. He was possibly a low-ranking reporter in Dhaka”.

Mr. Choudhury further said, “An ISIS funder, a thief and proven fraud like Shahid Uddin Khan is now questioning my integrity as a journalist. He has Tasneem as his lapdog. They say I am not a journalist. Well, I am not a so-called journalist like Tasneem Khalil who had taken political asylum in the West with fake claims. It goes beyond my dignity even to say anything about a tiny individual like Tasneem”.

He further said, “Shahid and his hired cohorts can bark like street dogs, but very soon, they will be facing legal consequences”.

It is a matter of great surprise as to how the British authorities are allowing Shahid Uddin Khan and his family in continuing criminal conspiracy against Bangladesh. Plotting a coup in Bangladesh by sitting in London is a serious crime. At the same time, Shahid and his family loses their rights of staying in the United Kingdom as they had laundered millions of pounds and invested in that country, both for getting visa Tier 1, vide VAF No. 511702 as well as subsequent privileges. They should be immediately deported to Bangladesh.

Originally published in The Eastern Herald