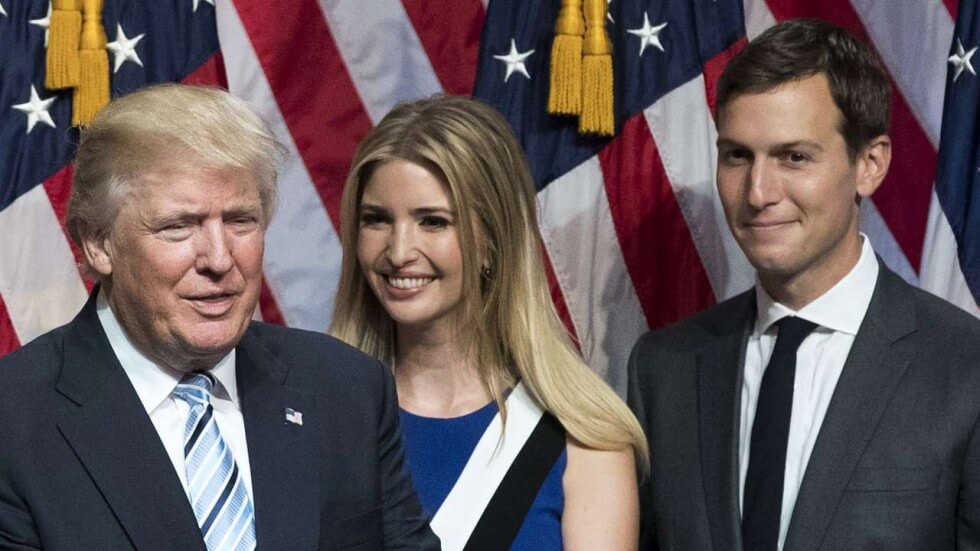 Why would Ivanka Trump’s husband and the father of presidential grandkids do such a thing?

“Because he and Ivanka are going to have to go back to the Upper East Side and go to the Hamptons,” Coulter told the Daily Beast in an interview published Thursday. “They’re probably worried that Trump will be removed within the next few years.”

“The country will be in very bad shape if Trump doesn’t arise from his torpor and keep his campaign promises,” Coulter, a zealous Trumpkin during the last campaign, writes in her latest book, Resistance Is Futile! How the Trump-Hating Left Lost Its Collective Mind, “but if we get nothing else from his presidency, at least the media will be totally discredited.”

Coulter—who recently admitted that she’s “heartbroken” that the thesis of her 2016 hagiography, In Trump We Trust: E Pluribus Awesome!, didn’t pan out, especially the president’s failure to build his vaunted wall on the Mexican border—continues: “Trump may be shallow, narcissistic, disloyal, and the crudest kind of braggart, but he’s like chemotherapy for the country: it’s unpleasant to go through,  you vomit, your hair falls out—but it kills cancer cells, and you live… [and] everyone on The New York Times’ editorial board will die.”

She noted the timing of the op-ed, which ran after the couple went to the funeral for Sen. John McCain. It also was “right after Labor Day, so they were probably feeling wistful for the Hamptons. And the only way they can get back in is if they can say, ‘Don’t worry; we’re the ones who stopped the wall.’ ”

Coulter sees Ivanka Trump’s husband, the scion of a wealthy real estate family with zero government experience but who now boasts the lofty title senior presidential adviser, as a symptom of Trump’s bias toward hiring friends and family, including his fashionista-daughter, over experts who actually know what they’re talking about.

Apparently, no fan of the president’s son-in-law, Coulter’s new book, “Resistance Is Futile! How the Trump-Hating Left Lost Its Collective Mind,” includes a hypothetical scenario where Trump has Kushner shot.

Former Trump adviser Omarosa Maginault Newman has speculated that Vice President Mike Pence or someone in his office was the author, an accusation Pence has vehemently denied.

There are lots of conspiracies currently going on in the US. Former president Barack Obama and Hillary Clinton clearly has exhibited the zeal of getting media madly in their favor. In the American history, possibly no other president had faced such continuous and ruthless attacks from the hostile media. Most of the US news outlets are predicting an ‘easy victory’ for the Democrats in the Congress and Senate elections and are seeing ’impeachment’ of President Trump. Media notoriety against Donald Trump has greatly increased since he moved the American embassy in Israel from Tel Aviv to Jerusalem. Barack Obama was vehemently against recognizing Jerusalem as the eternal and undivided capital of the Jewish State.

Former President Barack Obama is on the campaign trail, stumping for Democratic candidates in a midterm election in which he says our very democracy is at stake. And many conservative politicians and pundits were happy to get the chance to relive the Obama years and point to what they perceive as his failures in office.

Sen. Lindsey Graham, R-S.C., said in response to Obama’s speech that, “The more former President Obama speaks about the ‘good ol years’ of his presidency, the more likely President Trump is to get re-elected.”

Former Trump adviser Sebastian Gorka said Obama’s “whole eight-year presidency was an embarrassment when it comes to everything from the economy to national security.”

Fox News host Jeanine Pirro derided Obama for a full-throttled, savage attack on Trump. She particularly took issue with Obama’s statement that Trump has been “capitalizing” on America’s historical resentments.

“Are you kidding?” asked Pirro. “If anyone has stoked racial hatred and divisiveness, it’s you,” she said, citing Obama’s actions in the wake of the 2014 police shooting in Ferguson, Missouri, that helped spark the Black Lives Matter movement.

“The only reason that we have an outsider, businessman president is because of you, your lies, your policies and your divisiveness,” Pirro said. “You, Barack, you elected Donald Trump.”

Former New Jersey Gov. Chris Christie also took issue with Obama’s attempt to blame America’s divisions on Trump, calling it “richly ironic” for him to refer to Trump as a “symptom” of the divide.

Former Fox News host Bill O’Reilly slammed Obama for violating the unwritten code of former presidents not publicly criticizing their predecessors. But O’Reilly said Obama’s appearances will be good news for Trump and the Republicans because it reminds voters of two things: that Obama’s “economic policies harmed many Americans” and that “evidence points to powerful people within the Obama administration misusing the FBI and federal judges to illegally surveil the Trump campaign.”

In his speech Friday, a shameless Obama told the crowd that “when you hear how great the economy’s doing right now,” it is important to “remember when this recovery started.”

Stephen Moore, who served as economic adviser to Trump during the campaign, called it “preposterous” for Obama to take credit for the booming economy. Moore said the economy was slowing down dramatically at the end of Obama’s second term and that the current growth started as “a result of the fact that Obama and Clinton were not going to be office anymore.”

Fox Business host Stuart Varney called it a “stretch” for Obama to take credit for the economy.

Conservative Eric Bolling tweeted that it is “disgraceful” to see Obama taking credit for Trump’s successes.

Brentwood resident Judy Partain is planning to cast a ballot for Republican senatorial nominee Marsha Blackburn in this year’s midterm elections, despite having an appreciation for former Democratic Gov. Phil Bredesen.

“I liked what Bredesen did as governor, and if he wasn’t a Democrat, I’d be voting for him,” she said, adding that the GOP must maintain control of the Senate.

And although Partain has reached her decision, she is part of a key demographic that could decide the fate of this year’s U.S. Senate race: suburban voters.

Like Loading...
Continue Reading
Advertisement
You may also like...
Related Topics:A scion of a wealthy real estate family, Conspiracy against the Kushner couple, Vice President Mike Pence or someone in his office was the author