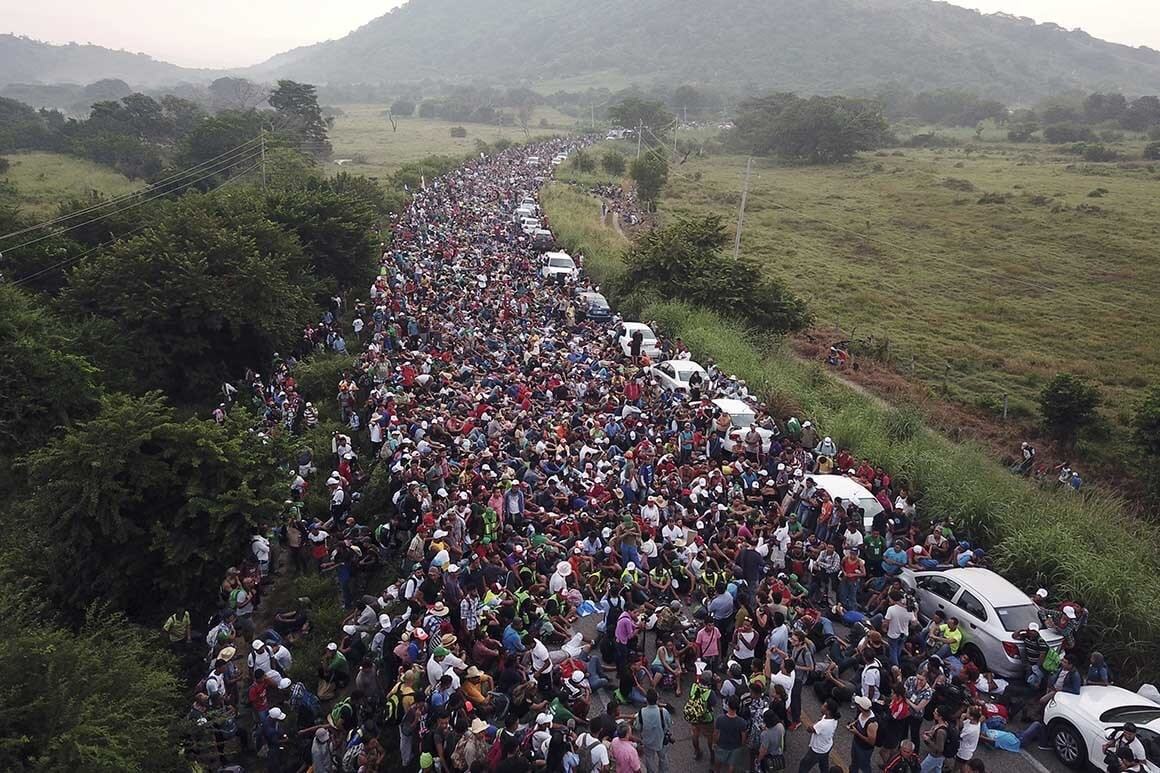 Following publication of a number of exclusive reports in this newspaper, unearthing the fact of hundreds of hardened criminals from various Afro-Asian nations, who are marching towards the United States (DHS) with the clear agenda of creating anarchy, the Department of Homeland Security too has now acknowledged, those in the caravan are comprised of people from at least 20 countries, and more than 270 are either known gang members or have criminal backgrounds. What DHS is yet to acknowledge is – there are members of Al Qaeda, ISIS, Hezbollah, Hamas, Al Shabab, Boko Haram and other radical Islamic militancy outlets in this caravan. DHS is also yet to acknowledge another fact that some unscrupulous individuals and groups have been secretly supplying weapons and explosives to a section of the people in caravan.

In a release titled “Myth vs. Fact: Caravan,” DHS, without citing sources, said the charges against the violent criminals in the caravans include “aggravated assault with a deadly weapon, armed robbery, sexual assault on a child, and assault on a female,” the Washington Examiner reported.

Meanwhile, the first 100 troops have arrived at the U.S.-Mexico border. Another 7,000 military personnel will arrive through the weekend ahead of the caravan’s arrival. President Trump has said he could send as many as 15,000 troops.

At the White House on Thursday, Trump was asked if the military personnel might open fire on the caravan.

“But I will tell you this: Anybody throwing stones, rocks, like they did to Mexico and the Mexican military, Mexican police – where they badly hurt police and soldiers of Mexico – we will consider that a firearm.”

The initial caravan, now with an estimated 4,000 people about 900 miles from the U.S. border, will depart from Matias Romero, Mexico, early Friday. It could arrive sometime between Nov. 3 and 12, depending on whether or not the members walk or drive.

Two more caravans, with another 1,500 people, are behind it.

A DHS spokesman told the Washington Examiner the 270 criminals had previously been convicted, not just charged.

“We also continue to see individuals from over 20 countries in this flow from countries such as Somalia, India, Haiti, Afghanistan and Bangladesh,” DHS said. “There is a large segment of this population that we know nothing about and we must be prepared to defend our border and enforce our laws to protect the citizens of our country.”

The DHS report supports Trump’s claim last week that “unknown Middle Easterners” were in the caravan.

Mexican officials have confirmed that known criminals are among the migrants.

Mexican Interior Minister Navarrete Prida said Tuesday in a radio interview that he has videos from Guatemala “that show men dressed in identical clothing, sporting the same haircuts, handing out money to women to persuade them to move to the front of the caravan.”

“We know, for a fact, that some members of the caravan threatened [Mexican] Migration Institute personnel and we have images showing many of them preparing Molotov cocktails,” he said.

Donald Trump: Asylum not about poverty

DHS has emphasized that there is a legal process for seeking asylum in the United States by applying at a port of entry.

Trump has warned that any migrants who try to enter the U.S. illegally between ports of entry will be automatically returned.

An asylum seeker must prove that he or she has a well-founded fear of persecution based on race, religion, nationality, membership in a particular social group or political opinion.

Trump said asylum is “about safety” rather than “a program for those that are living in poverty.”

In a change of policy, he said, asylum seekers will remain in custody until their hearing date.

“We’re not releasing anymore – we’re going to no longer release, we’re going to catch, we’re not going to release. They’re going to stay with us until the deportation hearing or the asylum hearing takes place,” he said.

According to credible sources, policymakers and strategists of the Democratic Party are maintaining closer contacts with several ‘leaders’ of the caravan people. Democrats are planning to create a massive anarchy in the US if the result of the November 6th midterm does not go in favour of them.

Physical assault, attack on properties and secret assassination on card:

Democratic Party wants to see President Donald Trump ousted by hook or crook. As part of this conspiracy, it is already setting individuals and groups in different states in the US with clear instruction of physically attacking the Republican leaders and their family members; vandalizing their properties; and even going into secret assassination of the GOP Senators, Congressmen, Governors and key figures. It is further learnt, Iran and some of the Arab nations are sending millions of dollars for funding such dangerous agenda.