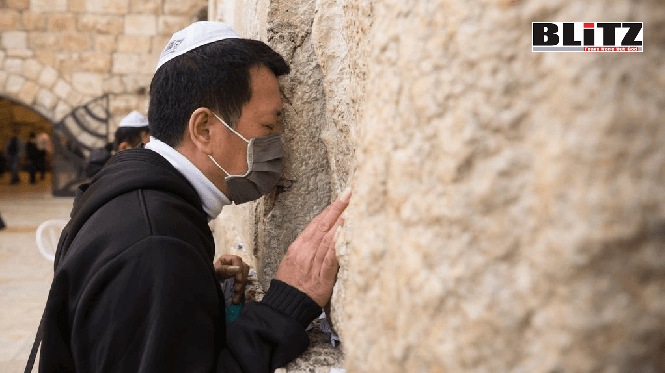 The outburst of the coronavirus (COVID-19) pandemic has led to the rapid proliferation of a host of antisemitic conspiracy theories. This is unfortunately hardly surprising, as the tendency to blame the Jews for widespread misfortune dates back centuries. One of the earliest recorded anti-Jewish conspiracy theories was written about by Roman-era Jewish historian Flavius Josephus. He tells us that according to the Jew-hater Apion, a Greek who lived in Egypt, the Jews kidnapped a Greek, held him captive in the Temple in Jerusalem, sacrificed him, and ate him. This was the forerunner of the blood libel, one of the major strains of antisemitic conspiracy theories.

Fast forward to today. Nathan Sharansky recently said, “They are blaming the Jews [for coronavirus], accusing us of trying to destroy the economy in order to make money.” He noted that recent virulent antisemitic propaganda blaming Jews for the virus outbreak originated in Iran, Turkey, and other countries that are unfriendly to Israel and the Jews. In Iran, the state-controlled media is blaming “Zionists” for the epidemic and warning people not to use a coronavirus vaccine if it is developed by Israeli scientists (though this message is somewhat inconsistent: top Iranian cleric Grand Ayatollah Nasser Makarem Shirazi has said using an Israeli vaccine is permissible if there is no substitute).

The ADL cites the claim by white supremacists that Jews created the virus to increase their control over a decimated population and profit financially, a message that is spreading on mainstream platforms like Twitter, YouTube, Instagram, and Reddit.  Some conspiracy theorists suggest that the virus was manufactured by the US and Israel to target political rivals like China and Iran.

A guest on Turkish state television said, “Jews, Zionists, have organized and engineered the novel coronavirus as a biological weapon just like the bird flu ‘to design the world, seize countries, and neuter the world’s population.’” The Palestinians, too, are busy promoting conspiracy theories at a time when they receive Israeli support for fighting the pandemic. The Palestinian Authority daily al-Hayat al-Jadida carried a cartoon on March 16 of the coronavirus in the form of a big Israeli tank pursuing a small Palestinian carrying an infant. The al-Quds daily in East Jerusalem wrote that the coronavirus is a biological weapon that the US and Israel decided to deploy against China and Iran after failing to harm them by conventional means. Continuing this theme, Iranian Supreme Leader Ayatollah Ali Khamenei said American medicine is being used to spread the virus and alleges that the virus was specifically built to target Iran by using Iranian genetic data somehow obtained by the US. He also says the US wants to send doctors to Iran not to assist in the crisis but to witness the effects of the poison they produced.

Swiss cult leader and lay preacher Ivo Sasek, founder of the Swiss-based group “Organic Christian Generation,” has claimed in the past that Jewish conspirators are preparing to reduce the world’s population to 500 million through a billion-fold mass murder. During the current crisis, the group disseminated a flyer that claims that coronavirus is a biological weapon unleashed on the world by US-based Jewish Holocaust survivor George Soros.

Austrian right-wing extremist Martin Sellner, a member of the neo-fascist “Identitäre” group and a figure with thousands of followers, is spreading the similar idea that the Soros Open Society Foundation is responsible for the coronavirus crisis. Nor is this notion reserved for European fringe antisemites. US Republican Congressional candidate Joanne Wright has said the virus is linked to Soros and Bill Gates.

Antisemitic conspiracy theories have a long history. The claim that the Jews are connected with the spread of disease is the second major strain of conspiracy theory following the blood libel. It dates back to the Middle Ages, when Jews were blamed for plagues, including the Black Death of the 14th century. At that time, the Jews were accused of having poisoned the wells.

The poison and sickness motif was given new life by Palestinian president Mahmoud Abbas at a plenary of the European Parliament in 2016, where he told the assembly that a rabbi had asked the Israeli government to poison Palestinian drinking water. He received a standing ovation for this speech from many European parliamentarians. The chairman of the European parliament at that time, German socialist Martin Schulz, called Abbas’s speech “inspiring.”  Two days later, Abbas admitted there was no such rabbi.

Palestinian Media Watch has published a long list of contemporary Palestinian mutations of the ancient poison libel. These include the accusation that Israel spread AIDS within the Palestinian community via promiscuous women. Other mutations of this motif include claims that doctors have been paid to spread disease among Palestinians. This echoes Stalin’s Soviet Union, where Jewish doctors were arrested and indicted on the accusation that they planned to poison Stalin and the Soviet leadership.

The variant that Jews and Israel want to dominate the world is a third major category of antisemitic conspiracy theory. The main document accusing the Jews of conspiring to this end is The Protocols of the Elders of Zion, a tsarist-era forgery that has been reprinted in large numbers for decades. It is regularly republished and disseminated, both in the Muslim world and in the West. A few weeks ago, the British charity Oxfam removed two editions of the Protocols from its online shop after a complaint by Mark Regev, Israel’s ambassador to the UK.

The earlier mentioned major blood libel variant in the Christian world goes back to the town of Norwich, UK in the year 1144. Over the centuries it has recurred across Europe. The Italian city of Trent in the fifteenth century is an infamous example.

Raphael Israeli, in his book Blood Libel and its Derivatives: The Scourge of Anti-Semitism, says:

Christians introduced the blood libel to the Islamic world. In 1840, the French consul in Damascus and some of the monks falsely claimed that a Christian priest in that city, Father Thomas, was murdered by Jews who used his blood. The blood libel was also promoted by the Nazis. The antisemitic publication Der Stürmer published a special issue in 1934. The front page featured an illustration of a German boy lying on a table surrounded by Jews with long beards and earlocks. They were sucking the blood out of his body through long tubes.

A postmodern version of the blood libel claims that Israel murders Palestinians in order to recycle their organs. On August 17, 2009, the culture section of the largest Swedish daily, the Social Democrat Aftonbladet, published an article by Donald Boström entitled “Våra söner plundras på sina organ” (“Our Sons Are Plundered of Their Organs”) in which the author claimed that the IDF was rumored to be killing Palestinians and harvesting their organs for transplant in collusion with the Israeli medical establishment.

Historian Richard Landes says that in our day,

We see a revival of conspiracy theories. Muslim societies are most prominent in the production, circulation and belief in them. The best-known conspiracy theory is probably that Americans themselves, or the Mossad, carried out the 9/11 terror attacks and not the jihadist Al-Qaeda perpetrators. This belief permeates elites throughout the Muslim world.

Landes went on to say: “Conspiracy theories coming out of the Muslim world are accompanied by another surprising phenomenon. In the past, conspiracists blamed a malevolent other—the Jews, the lepers, the witches, the communists. Now we find Western believers in conspiracy theories that target the West—for instance those of 9/11—in which some believers confirm the paranoid accusations of their enemies. The postmodern conspiracy theory’s siren song runs: “‘We’ are to blame, ‘our’ enemy is innocent.”