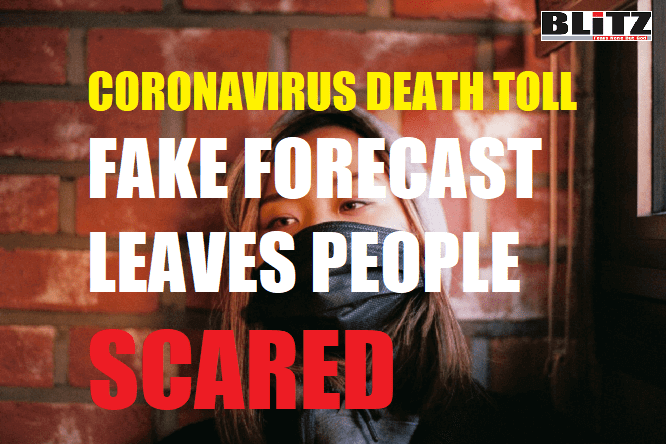 Two million people will die in Bangladesh due to coronavirus. This was a forecast by the World Health Organization (WHO), which had received a tremendous cheer from the anti-Bangladesh elements. The same patterned scaring conspiracies were staged by the pharmaceutical giants in India, Britain, the United States, and few more nations in the world. There had been multiple reasons behind such fake forecasts. One of the many ways to boost the business prospects of the pharmaceutical companies to many folds. The second reason was to put the ruling governments in some countries into severe odds.

The death toll story about Bangladesh was jointly written by some crooks inside the World Health Organization in association with a private university in Bangladesh as well as few dubious individuals. The so-called researcher of the private university was founded by a conglomerate of the pharmaceuticals company and Pakistani spy agency Inter-Service Intelligence, while some individuals at WHO was directly bribed by the same conglomerate.

In brief, the death toll forecast was a part of a huge conspiracy against Bangladesh. The UN body by abetting such heinous crime has once again proved, the United Nations has already turned into a rogue entity.

What had happened in the US and Britain?

The man behind the dire coronavirus death forecast that prompted the strict lockdowns in the United States and the United Kingdom has a history of conflicts of interest, including ties to the pharmaceutical industry.

Ferguson led the team at the Imperial College of London that published a report on March 16 forecasting 2.2 million deaths in the United States and 500,000 in Britain from the coronavirus. However, just 10 days later, he told a parliamentary committee that the U.K. death toll is unlikely to exceed 20,000 and could be much lower. And more than half that number would have died anyway by the end of the year, because of their age and underlying illnesses, he told the panel. The current U.K. figure is more than 28,000 while the U.S. has recorded more than 65,000 deaths.

The Express of London noted Ferguson’s models in the fight against the swine flu a decade ago also were way off. He predicted 65,000 people in the U.K. would die. But only 457 succumbed to the disease.

Ferguson at the time was advising the World Health Organization while he had ties with the pharmaceutical industry.

The companies were manufacturers of the swine flu vaccines and medications, but that was “not a problem for the WHO,” the documentary said.

In an interview at the time with the pharmaceutical publication Scrip, Ferguson explained his ties.

“I chose to end the relationship with GSK and Roche in 2007 due to the mounting pressures of other (more important) work, and because I wanted to pursue advisory work with public bodies which is more easily done without current relationships with commercial companies,” he said.

“I think it would be difficult to find a true expert on influenza vaccines and antiviral drugs who has not worked at some time with pharma companies.

He explained the development of such products is “undertaken by commercial companies, they have the data, and they are interested in research which relates to their products.”

“I think science generally benefits from links between academic and commercial research, as does the quality of scientific advice offered to public health agencies,” he argued.

The Express noted the swine flu outbreak proved a perfect financial opportunity for the pharmaceutical industry.

JPMorgan estimated some $7-10 billion was made off 2009 vaccine profits alone.

When contacted by the Express, Ferguson said he had no conflicts of interest in relation to the coronavirus pandemic.

As WND reported March 26, Ferguson’s coronavirus study was cited by the White House, Downing Street and other governments in their decisions to implement unprecedented “social distancing” measures.

She said the predictions of models also “don’t match the reality on the ground in either China, South Korea or Italy.”

“Models are models. There’s enough data now of the real experience with the coronavirus on the ground, really, to make these predictions much more sound,” said Birx.

“So when people start talking about 20% of a population getting infected, it’s very scary,” she said. “But we don’t have data that matches that.”

Ferguson issued a clarification later that day via Twitter, arguing his evidence to Parliament “referred to the deaths we assess might occur in the UK in the presence of the very intensive social distancing and other public health interventions now in place.”

“Without those controls, our assessment remains that the UK would see the scale of deaths reported in our study (namely, up to approximately 500 thousand),” he wrote.

However, no one in the U.S. or the U.K. was advocating at the time that no measures be taken to control the spread of the virus, points out Powerline blogger Paul Mirengoff.

“Some degree of social distancing and complete isolation of the sick were almost universally viewed as appropriate and, indeed, necessary,” he wrote.

“Yet, Ferguson’s projection became part of the basis, not just for social distancing and isolation of the sick, but for imposing lockdown style measures in some jurisdictions.”

And Ferguson acknowledged in an interview with the New York Times that a comprehensive lockdown is what he wanted.

“Based on our estimates and other teams’, there’s really no option but follow in China’s footsteps and suppress,” he said.

Mirengoff commented: “Perhaps this is why Ferguson waited so long to make it clear that, at least in the U.S., the Imperial College forecast that garnered so much attention from policymakers was a strawman.”

In fact, New York Democratic Gov. Andrew Cuomo, who is managing the country’s most severe outbreak, was questioning the comprehensive lockdown strategy at the time.

On Wednesday, he said the shelter-in-place policy may be backfiring by confining vulnerable older people with younger family members.