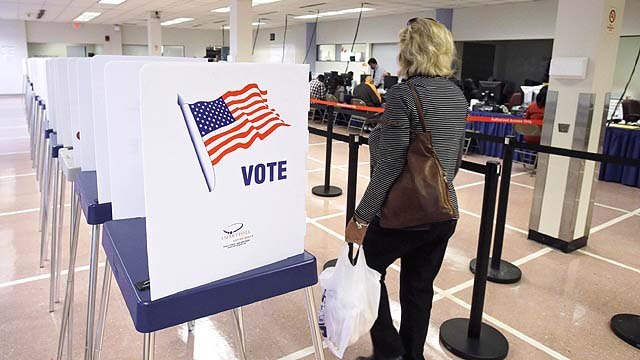 Texas Attorney General Ken Paxton has been asked to launch a criminal investigation into a mailing by Democrats of voter-registration forms that have the citizenship box pre-checked.

It effectively invites non-citizens to register to vote in the coming election, urging them to sign the form and mail it immediately.

The form has populated the “yes” box in answer to the question of whether the applicant is a United States citizen.

The documents were in mailers circulated around the Rio Grande Valley by the Texas Democratic Party, Adams’ letter explained.

“Noncitizens usually register to vote at the prompting of another party – usually a DMV clerk. Today, we are raising awareness to how the Texas Democrat Party – unintentionally or otherwise – is offering voter registration to noncitizens,” he wrote.

“Without some form of official intervention, confused noncitizens rather than the Texas Dems will end up paying the consequences of this matter.”

“Section 13.007 of the Texas Election Code provides that a person commits an offense if the person knowingly makes a false statement or requests, commands, or attempts to induce another person to make a false statement on a voter registration application,” the letter explained.

“After review of the submitted documents, we believe the information regarding the offense warrants a submission for criminal investigation to the Texas attorney general as the specific allegations described involve a potential Class B misdemeanor on the part of those who ‘request’ or ‘attempt[] to induce’ (1) non-United States citizens to make a false statement on a voter registration application that they are United States citizens; and (2) individuals who are not deceased to fill out a voter registration application in the name of individuals who are deceased,” the letter said.

“This is a critical step in protecting both resident citizens and immigrants alike from the consequences of ineligible voting activity,” said Adams. “It was wholly unnecessary for the Texas Democrats to alter voter registration forms. They invited confusion and potentially unlawful activity where the consequences would only be paid by immigrant communities.”

Texas Gov. Greg Abbott assured the public via Twitter that an investigation was underway.

“The numerous calls and complaints we have received regarding pre-filled voter registration applications sent to ineligible voters are highly disturbing, and our office has requested General Paxton investigate these troublesome claims,” he wrote.

“We continue to urge all Texans to be vigilant when receiving registration or ballot by mail materials from third parties, and my office will continue to work to ensure that Texans and Texas voters are protected form any illegal activity.”

The Washington Times reported the mailings came from the state party but had pre-addressed return envelopes going to elections officials, leaving residents with the impression they were officials communications.

PILF explained that when Congress passed the NVRA, it “envisioned a registrant making two separate affirmations of citizenship – both the checkbox as well as the signature attestation.”

“This enables prosecutors to easier establish intent and state of mind when noncitizens illegally register to vote.”

PILF said the organization was contacted by a registered voter who saw the forms going to relatives who are legal permanent residents.

“The mail, apparently sent by ‘the Texas Democratic Party, TXDemocrats.org’ with a return address listed under the ‘State Democratic Executive Committee’ contained language to include: ‘Your voter registration application is inside. Complete, sign and return it today!’”

“The enclosed voter application form was apparently altered, given that the answers for ‘Are you a United States Citizen?’ and ‘Will you be 18 years of age on or before election day?’ were pre-printed ‘Yes’ for each,” the letter explains.

“The approved federal and state voter registration forms do not have prepopulated answers because the voter must answer the important citizenship question on their own.”