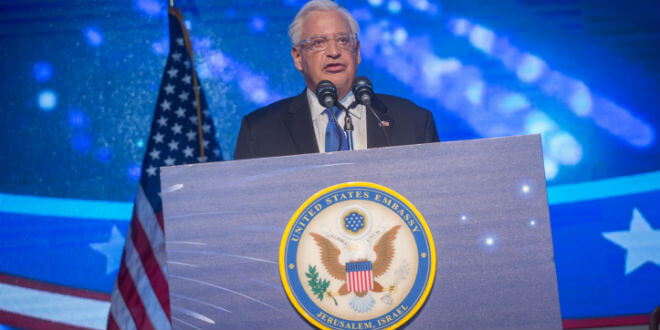 Friedman called the payments “unconscionable” and said the PA’s practice of making such payments to terrorists and their families was an obstacle to peace. He said that the Palestinian Prisoner Affairs Commission had confirmed that 17-year-old Khalil Jabarin’s family would be eligible for a monthly salary – once the paperwork had been completed. The same commission denied an Israeli TV report that the PA had already sent a multi-thousand shekels advance to the family.

On Monday, Israel’s Channel 20 reported that the PA had transferred an advance of NIS 12,000 (some $3,300) to the family of Jabarin hours after he carried out the stabbing attack at the Gush Etzion Junction in the West Bank, killing 45-year-old Fuld, a father of four and a resident of the Efrat settlement.

Jabarin is currently being held in custody in an Israeli prison. Despite being mortally wounded by the stabbing attack, Fuld somehow managed to hurdle a fence, draw his gun – and along with another bystander – bring down Jabarin, who according to recent accounts was running toward a woman running a falafel stand as his next intended victim. Jabarin was moderately wounded in the incident.

While the Palestinian Prisoner Affairs Commission’s spokesperson Hassan Abd Rabbo hotly denied Channel 20’s allegation, he did admit that the Jabarin’s would be eligible for funds. “We are not bashful or secretive about our support for our prisoners,” he said. “The [Jabarin] family would be eligible to receive a monthly salary of NIS 1,400 ($390), if their son is not freed by Israel and it completes all the necessary documents.”

Earlier in the week Friedman paid effusive tribute to Fuld, whom he described as a “passionate defender of Israel.” He has also been instrumental in keeping up the pressure on the Palestinian leadership, holding them to account for repeated failures to live up to their responsibilities as potential partners for peace. The ambassador charged that over several decades the US had given the Palestinians “more than $10 billion” in aid. He maintained that the funds had at least been partly used to reward terrorists and their families, to fund incitement in education – and to finance an agency – the United Nations Relief and Works Agency (UNRWA) – which, by extending refugee status to all Palestinian descendants, perpetuated rather than providing a solution to the refugee problem.

In early July, the Knesset (Israel’s parliament) passed a law, which was aimed at slashing payments to the PA for the payments it made to convicted terrorists. It mirrored the passing of a law in the US in March – the Taylor Force Act (named after a non-Jewish American tourist murdered by a Palestinian assailant) – which also halted payments to the PA as punishment for their continued policy of paying terrorist “salaries.”

Like Loading...
Recommended for you:
Continue Reading
Advertisement
You may also like...
Related Topics:David Friedman scorched the Palestinian Authority’s declared intention of providing financial aide to terrorists, Friedman paid effusive tribute to Ari Fuld, US had given the Palestinians more than US$10 billion