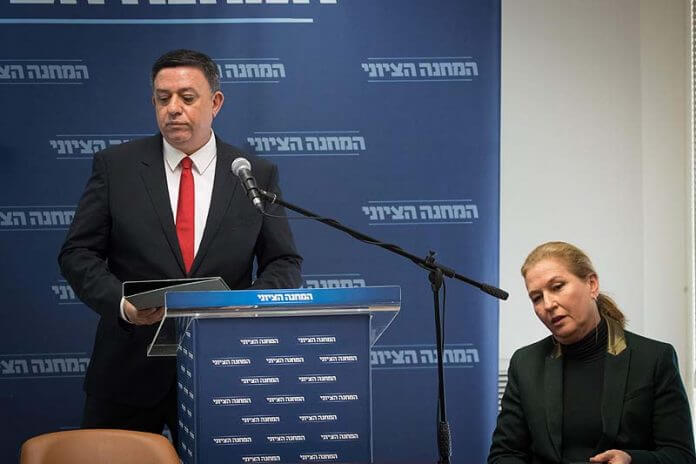 The name Zionist Union or Zionist Camp was coined in 2015, when Livni and then Labor chairman Isaac Herzog struck a partnership that stood the unseat PM Netanyahu with an impressive 24 Knesset seats. At the last-minute, however, Netanyahu managed to beef up his electoral score to 30 mandates.

Gabbay said at the end of the meeting that he still believes in partnership and connections. However, he said, “successful connections require friendship, honoring agreements and loyalty to the path – and in our partnership it’s not happening.”

Gabay said he wished Livni success in the coming elections. Livni, for her part, said she would not respond to the statement which, essentially, ended her partnership with Labor, and left the room.

Gabbay said: “A successful connection requires friendship and loyalty – and in our partnership it does not happen.”

“On Herzog’s advice, I kept my partnership with Livni and her Movement party,” Gabay said, noting: “It’s not easy joining a partnership that someone else set up. I tried to lead to the unification of the parties, and, unfortunately, this did not happen.”

He said that Livni had demanded the post of chairman of the opposition from him, and he had agreed, in order to preserve the partnership between the parties. But he observed that the public did not believe in their cooperation and therefore did its support of the Zionist Camp is diminishing alarmingly – from 24 to as low as 7 seats according to some polls.

“The public is smart,” Gabay said, suggesting Labor voters did not believe there was much harmony between Livni and himself, so they kept away.

Gabay was irate a month ago, when he found out Livni had commissioned a survey to predict how many seats the Zionist Union would get with herself at the helm.

“Instead of running surveys to see how we might win, you run surveys on how you might beat me, how you could manage to push me out,” Gabay told Livni,

“You weaken me and all of us by extension,” Gabay rebuked Livni, adding, “As long as I am being portrayed as temporary feature, as someone who is about to be replaced, we will never recover in the polls. ”

Gabay was also enraged by Livni’s attempts to form behind his back a left-center bloc composed of several parties.

Prime Minister Netanyahu tweeted gleefully: “I do not intervene in how the left divides its votes. What’s important to me is that the right establish the next government, too, and continue to lead the State of Israel. To that end, you must vote only Likud.”

This turn in her career marks Livni’s fifth move from one political home to the next. Seeing as MK Dov Henin, the only Jewish Knesset member in the United Arab List, is retiring from politics, Livni should consider becoming the next Communist in the Knesset.