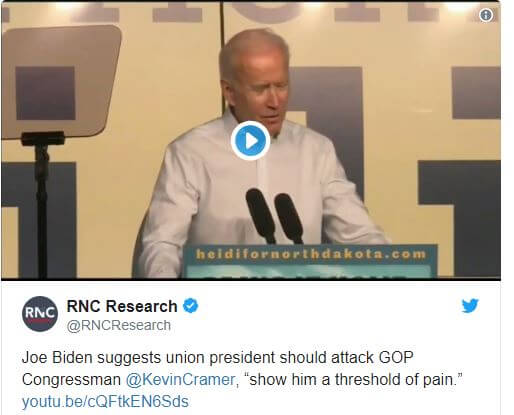 Leader of the Democratic Party and former Vice President Joe Biden only a week ago called for an end to “this division, this hatred, this ugliness” around the 2018 midterm elections.

Now he’s calling for a union official to come up and show a member of Congress “a threshold of pain.”

It’s the latest in the Democrats’ rhetoric calling for violence around next week’s election.

A post on the Twitter news aggregating site Twitchy said it “seems like only last week when Joe Biden was decrying ‘this division, this hatred, this ugliness.’ Probably because it was only last week.”

The RNC pointed out, “Joe Biden suggests union president should attack GOP Congressman @KevinCramer, ‘show him a threshold of pain.’”

Such comments have become common in the run-up to the vote.

Two days ago, actor James Cromwell warned there will be “blood in the streets” if Democrats don’t win on Tuesday.

Conservative Firing Line noted Cromwell was at the annual Carney Awards when he told Variety there would be “blood in the streets” if Democrats lose.

“This is nascent fascism,” he claimed. “We always had a turnkey, totalitarian state – all we needed was an excuse, and all the institutions were in place to turn this into pure fascism.”

He added: “If we don’t stop [President Trump] now, then we will have a revolution for real. Then there will be blood in the streets.”

Conservative Firing Line commented: “Translation: If Democrats lose the midterm elections, there will be violence and blood in the streets.”

“We’re living in very curious times,” Cromwell said, “and something is coming up which is desperately important to this country and to this planet, and that is an election, in which hopefully in some measure we are going to take back our democracy.

“We will have a government that represents us and not the donor class. We will cut through the corruption [and] we won’t have to do what comes next, which is either a non-violent revolution or a violent one, because this has got to end.”

Social media took him immediately to task, with Lee Jackson’s: “You freaking idiot, @jamescromwell, there’s already been blood in the streets, in our schools, churches and synagogues because of your ilk and the Loathsome Left. Get a clue. You’re all demented.”

Cromwell tried to walk back the remarks on Tuesday.

“Not promoting violence, voting against it. You will never see me raising a fist,” he tweeted. “I’m a pacifist. My words were taken out of context. I’m worried about the blood of the dissent, protesters, more children shot at school, people shot while praying, for who they love and who they are.”

He added: “The Variety article used an out of context quote 4 a headline and got just what they wanted – twitter fired up. It would have been nice if they included the context of that statement in the article. I’m sure I would still be getting death threats but they would be more ironic.”

The Hill pointed out that Cromwell was sentenced to jail last year after refusing to pay fines following an arrest while protesting outside a New York power plant. He also was arrested in 2017 at a protest of SeaWorld’s orca show in San Diego.

The comments about violence have not been restricted to actors.

A deputy communications director for Minnesota’s Democratic-Farmer-Labor Party was suspended for a week for a tweet threatening members of the GOP with “guillotines.”

An ad released by the Republican National Committee compiled a montage of Democratic leaders urging violent resistance of their opponents.

There was Eric Holder’s call to kick Republicans, Maxine Waters’ to harass Trump officials in public, Nancy Pelosi’s, “I just don’t know why there aren’t uprisings” and Hillary Clinton’s, “You cannot be civil with a political party that wants to destroy what you stand for.”

A commentator at Twitchy chided the Democrats for being able to “accidentally STAR in what could be the most BRUTAL RNC ad ever.”

“All the Left had to do was not be crazy,” the commentary said.

“Watching the mob attack innocent people and destroy property while Democratic leaders tell them to do it speaks volumes,” a Twitchy post said. “Hey, thanks Nancy, Eric, Maxine, Hillary, and Cory!”