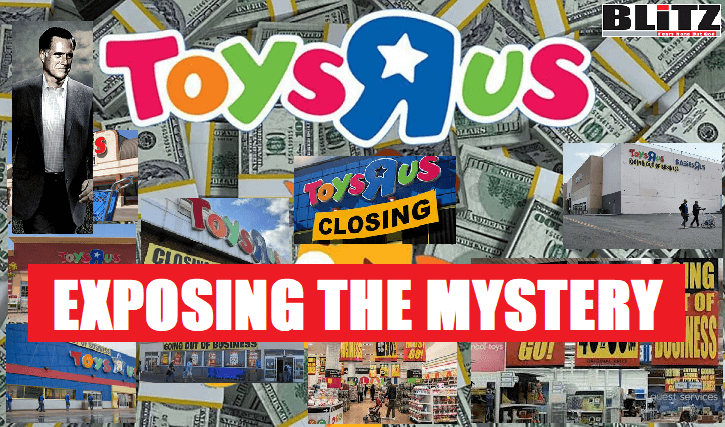 Questions are arising of – whether or not – Bain Capital will be investigated and prosecuted for killing Toys R Us; because whistleblower Laser Haas continues to beseech for investigations and prosecutions of Bain Capital doing racketeering of the toys industry via lawyers “Bankruptcy Rings”.

This reporter has interviewed Laser Haas and is alarmed to find out that Laser has solid proof (including several Smoking Guns) documenting the facts that Bain Capital & Goldman Sachs personnel have been partners in world-class, white collar, organized crimes in the billions of dollars.

Question is, was Toys R Us killed, deliberately?

According to Laser, that’s exactly what has happened, resultant of the fact that Bain Capital and Goldman Sachs have been unjustly enriched in excess of $5 Billion dollars.

Not according to Haas, who sent a January 2019 letter to Goldman Sachs New CEO, David Solomon, informing Solomon of the fact that he inherited serious problems when David Solomon became the new head executive of Goldman Sachs.

Since then, it appears that Sachs new CEO, has been cleaning house; because many of Goldman Sachs senior executives have found an exit door.

You may be asking, what does this have to do with Bain Capital and Toys R Us – and the answer to that question would be –

Turns out that Goldman Sachs has a two-faced culture problem.

One face if Sachs us that of a global powerhouse with vast billions of dollars invested and reserved, worldwide.

Unfortunately, due to that elevated status, bad apples within Goldman Sachs tens of thousands of employees, are able to pull rip off stunts; because Goldman Sachs has a reputation it must protect.

It’s better to sweep things under the rug and do a dozen acts if cover-ups (technically, Obstruction) than it is for any Goldman Sachs spokesperson to admit any bad faith mistakes were made.

Goldman Sachs is able to get away with its employees doing white collar crimes because of Sachs us powerful enough the company gets to slide its lawyers over to the Department of Justice.

Recently, Sachs (and Bain Capital) were extremely blessed to get their buddy – Jay Clayton – to be made the head of the United States Securities Exchanges Commission; which has assured Sachs and Bain a “good ole boys” safety net.

Apparently, Sullivan and Cromwell have been helping Bain Capital defraud eToys.com public company, of more than a billion dollars.

According to Laser Haas, who was a Chief Federal Judge court-appointed fiduciary of eToys.com; Goldman Sachs & Bain Capital have been getting away with Wall Street Super crimes, for decades.

Laser forewarned everybody, back in 2013, that Toys R Us would go bankrupt; but nobody listened to him – because Delaware United States Attorney, Colm Connolly – declined to listen to whistleblower Laser Haas.

Turns out, though, that Colm Felix Connolly has a conflict of interest problem that has aided & abetted organized crimes to get never-ending “Get out of Jail – Free Cards”

Laser Haas provided a Smoking Gun to this reporter, which proves – unequivocally – that Colm Felix Connolly was a conflicted federal prosecutor.

Colm Connolly was a partner of the Morris Nichols Arsht & Tunnell (“MNAT”) law firm, in Delaware, from 1998 until August 2001.

MNAT was the Delaware Federal Court appointed counsel for both Laser Haas and his eToys.com public company.

Turns out that Colm Connolly had a serious conflict of interests; because MNAT is the Delaware law firm for Goldman Sachs and Bain Capital.

This means that when MNAT nominated Paul Roy Traub to be the one to prosecute Goldman Sachs, in the New York Supreme Court (case# 601805/2002) – it was the same thing as – Sachs suing Sachs.

Meanwhile, with Colm Connolly guaranteeing that Sachs and Bain could fleece the retail toy industry, without the fret of the federal inquiry, the RICO Gang upped the ante to include Kay Bee, FAO Schwartz and eToys with either MNAT or Paul Traub involved – or both.

Both Kay Bee and eToys were in bankruptcy, multiple times – stiffing creditors over and over, again and again – and then Kay Bee & eToys wound up back at Bain Capital under Toys R Us.

Now Toys R Us has filed bankruptcy and Laser Haas is warning everybody that it is likely there’s a – rinse, lather, repeat RICO crime afoot – that Toys R Us was deliberately killed.

One thing for sure is, with Jay Clayton at the helm of the SEC, Goldman Sachs & Bain Capital are still remaining, totally ‘ Scot Free’

And that ain’t right!