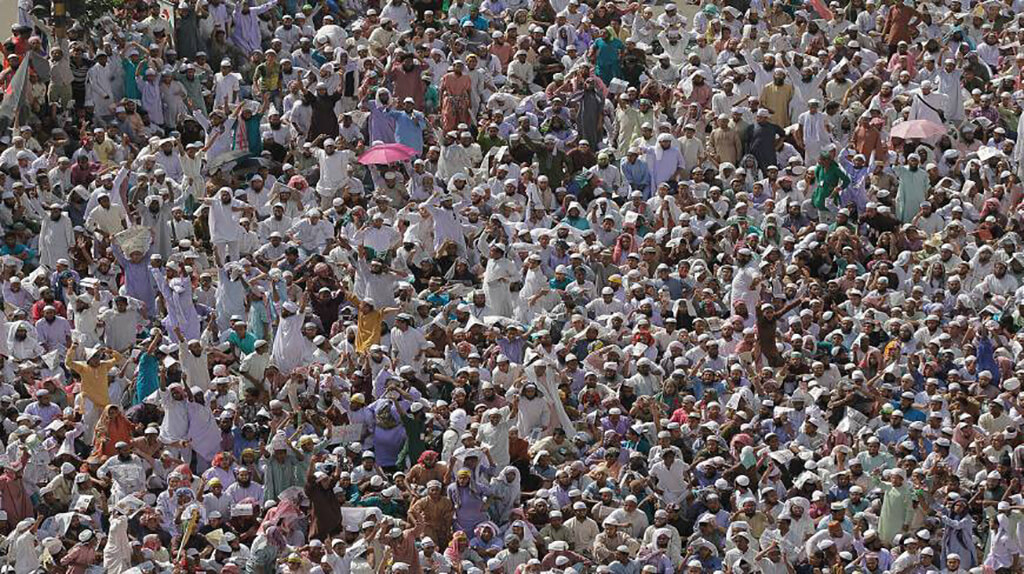 Ideologically there is no difference between Hefazat-e-Islam (HeI) and Islamic State (ISIS) as both the groups denounce democracy and promotes the idea of establishing Caliphate. But, considering the size of the supporters and activists of these groups, HeI may ultimately emerge as a much greater threat to regional and global security, because, according to statistics, Hei has almost four million supporters and activists from the Qawmi madrassas. On May 5, 2013, Hefazat-e-Islam held a rally in Dhaka, which was attended by at least half-a-million Hei men. From that rally, leader of this group, Shah Ahmed Shafi has demanded establishment of Caliphate in Bangladesh.

Hefazat-e-Islam was formed in 2010, as a pressure group comprising the teachers of several madrassa at Chattogram, Bangladesh.The formation was allegedly triggered by the 2009 “Women Development Policy” draft. On February 24, 2010, Hefazat wanted to hold a rally in the port city of Chattogram to protest the government’s move to slap a ban on religion-based politics, cancellation of the Fifth Amendment to the Constitution, and a proposed education policy that would have ended madrasah education. The police refused their request to hold a rally.

Although The Economist claimed HeI to have been financed by doctrinaire Islamists in Saudi Arabia, in reality it has funding from several Afro-Arab sources.

Since 2014 though the ruling Awami League government has been allegimg that Hefazat is a front for Jamaat-e-Islami and seeks to derail the International tribunals for the war crimes committed in 1971, surprisingly in 2018, Awami League had embraced HeI as its ally and even had implemented few of the demands pressed by this extremist group, which went against the secularist spirits of Bangladesh.

Maulana Habibur Rahman, a madrasa principal of Sylet and one of the organizers of Hefazat-e Islam’s May 5, 2013 protest, claimed that he met Osama Bin Laden, with members of the banned militant organization Harkat-ul Jihad al-Islami, in 1998.

The then German ambassador in Bangladesh Albrecht Conze opined that HeI demands fundamentalism in Bangladesh.

Dramatically, a secularist Awami League has embraced a radical Islamist group like Hefazat-e-Islam as its ally and even had gone further by recognizing Qawmi madrassa degrees equivalent to college and university degrees, thus opening the doors of scope for these radicalized madrassa students in entering the civil and military administration. According to media reports, Hefazat-e-Islam even is going to have its representatives in the next parliament in Bangladesh as several HeI men reportedly have been nominated by the ruling party. This is certainly very disturbing news as HeI’s ultimate agenda is establishing Caliphate by removing democratic system. Under what consideration groups like Hefazat-e-Islam are accorded state patronization and even helped in emerging as a political factor in the country thus having its representatives in the parliament.

Awami League’s warmth towards Islamic fundamentalist Hefazat-e-Islam has raised eyebrows among a section of the liberals in Bangladesh. And such elements are not off the mark. Their argument is the same that Hefazat, perceived to be a diehard communal outfit with its hate actions in 2013 silencing liberals and abetting terror, perpetrated through hate crimes, has now tied up with the Awami League.

It is well anticipated that, HeI men in the parliament would exert full influence over the next ruling party in Bangladesh in implementing its Islamist agendas including adopting a blasphemy law similar to that of Iran and other radical Muslim nations as well as transforming a secular Bangladesh gradually into a Caliphate.

From the above statement of the deputy-general-secretary of HeI it is evidently proved that the members of this antisemitic radical Islamic group are entering the Western nations including the United Kingdom and the United States. This certainly is disturbing news as these radical teachers can preach radical Islam in the West and also radicalize local Muslims and provoke them towards militancy.

Bangladesh government in 2017 has removed “un-Islamic” contents from the school and college text books. Earlier on April 8, 2016, Hefazat-e-Islam objected that Muslim children “being made to read atheism and Hinduism” supporting lessons at schools and colleges.

By implementing demands pressed by HeI, the ruling party in Bangladesh had already left a strong signal of its increased interests in developing relations with radical Islamist groups like Hefazat-e-Islam.

Resolution in the US Congress:

The United States Congress already has passed a resolution HR-1169 against several Islamist groups including Hefazat-e-Islam stating, these groups pose an ongoing threat to Bangladesh’s stability and secular democracy. The resolution was introduced by Congressman Jim Banks.

The resolution called on the United States Agency for International Development and the State Department to halt all partnerships and funding arrangements with groups affiliated with Jamaat-e-Islami, Islami Chhatra Shibir, and Hefazat-e-Islam.

A big question and the potential threat:

While Bangladesh Nationalist Party (BNP) is already known of its pro-Islamist affiliations and Jamaat-e-Islami Bangladesh as a militancy-linked party, is there any room to consider the ruling Awami League (AL) as a party that upholds the spirit of secularism anymore? While BNP is affiliated with Islamists and jihadists, AL too is affiliated with a group like Hefazat-e-Islam that directly copies the ideology of ISIS and demands establishment of Caliphate in Bangladesh. A section of Indian newspapers are trying to justify Awami League’s romance with Hefazat-e-Islam saying it would help the ruling party in getting more votes as Hefazat would influence its followers to vote in favour of AL candidates. But, isn’t there anything called ethics anymore in politics? Why the political parties in Bangladesh are turning rogue like those in India? While conscious individuals always are asking the politicians to refrain from mixing religion into politics, unfortunately it is becoming crystal clear that all of the secularist forces in South Asia gradually are transforming into religious bigots.

Political parties in Bangladesh should have remembered, giving space to pro-Caliphate groups like Hefazat-e-Islam or joining hands with militancy-linked parties like Jamaat-e-Islami would ultimately help in emergence of another ISIS or Al Qaeda in the region.

Watch the video of Hefazat-e-Islam rally: