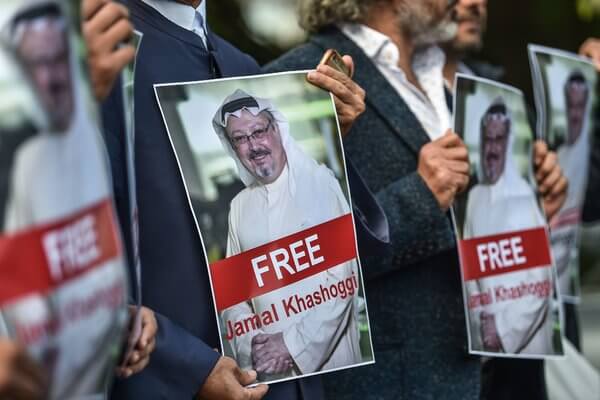 In one sense, the disappearance of Washington Post journalist Jamal Kashoggi after he entered Saudi Arabia’s consulate in Istanbul, Turkey, last week is pretty much business as usual for the Riyadh regime. Saudi Arabia is a tyrannical theocracy run as a family business by the descendants of Ibn Saud, the kingdom’s first monarch, and doesn’t take kindly to critics of the royal family, like Kashoggi.

Repression of dissent in such a nation is taken for granted. Indeed, the fact that Crown Prince Mohammed bin Salman, the de facto ruler of the country, is considered a supporter of modernization speaks volumes about how reactionary he and his government are. If allowing women to drive cars is considered a sign of liberalism, then you know you’re talking about a place that has at least one foot still firmly planted in the Middle Ages.

But for the Saudis to abduct and possibly murder a man who is a U.S. resident and a writer for a major American newspaper is the sort of thing that can’t be swept under the rug. The United States simply cannot let such an outrage go unanswered, and Washington is not going to have much choice but to punish the Saudis in some manner.

For those who want the United States to have a moral foreign policy, the Kashoggi incident is a reminder of the cost of an alliance with an unsavory, if friendly, government. The same can be said for Israel, which has an increasingly close strategic relationship with the Saudis, even if it is conducted under the table rather than out in the open.

Moreover, some are claiming that the fault here is not only with the Saudis, but also with U.S. President Donald Trump. His critics claim that his blasé approach to human rights has given a green light to both the Russians and the Saudis to engage in attacks on their critics on foreign soil.

Trump’s lack of interest in spreading American values about freedom abroad is not a secret. Nor is his soft spot for certain authoritarians, such as Russian leader Vladimir Putin and more recently, North Korean head Kim Jong-Un, or the Saudi royals, with whom he did a sword dance last year during a visit to the desert kingdom.

But the notion that the current administration is more lenient with foreign despots than his predecessor doesn’t stand up to scrutiny. Though Democrats, who often sound as if they’d like to go to war against Russia over its meddling in the 2016 election, prefer not to remember this, President Barack Obama mocked the notion that Russia was a geostrategic foe during his foreign-policy debate with Mitt Romney and promised Putin’s deputy that he would be “more flexible” after being re-elected. Nor was his relationship with the Saudis any less obsequious, as he gave them a pass on all their human-rights violations and actually bowed to King Faisal in another of the most cringe-inducing moments of his presidency.

Nor is the willingness to give allies a pass for horrible behavior a recent development. The United States embraced the Soviet Union and its genocidal leader, Josef Stalin, during World War II. During the Cold War, a series of Democratic and Republican administrations made nice with a variety of Third World miscreants in the search for allies against the Communists. In an imperfect and dangerous world, you can’t always pick your friends or stick only to friendships with those you can be proud of.

This dilemma was best summed by British Prime Minister Lord Palmerston, who famously told the House of Commons in 1848 that “Her Majesty’s government” had “no eternal allies, and we have no perpetual enemies. Our interests are eternal and perpetual, and those interests it is our duty to follow.” The Saudis are a classic example of such an ally of convenience.

That has been the case for decades as the kingdom looked to the United States for protection against its foes and, in exchange, assured a steady supply of oil to the West. Yet even nowadays, when America has secured a degree of energy independence, the alliance is still a good deal for Washington. In a Middle East threatened by radical Islamist groups, as well as Iran’s spread of terrorism and its quest for regional hegemony, the Saudis are a key factor in holding the line against forces that threaten U.S. interests.

The same is also true for Israel. While the Saudis were once among the most implacable enemies of the Jewish state, now they look to Jerusalem as a strategic asset that can help protect them against Iran. The Saudis have made it clear to the Palestinians that they must make peace with Israel and to expect no support if they continue to reject negotiations. Indeed, the Trump administration, and in particular, presidential son-in-law and senior adviser Jared Kushner, is counting on the Saudis to help in their efforts to negotiate a deal between Israel and the Palestinians. While that deal is unlikely to happen, there’s no question that the Saudis are playing a productive role in the region that Israel values. That is also true of Egypt, whose military government is a staunch foe of radical Islamists, but has an even worse human-rights record than the Saudis.

None of that erases the Saudi record on human rights or its record of supporting radical Islamist groups. Nor is it likely that a monarchy whose legitimacy depends on its role as the guardian of Islamic holy places will ever bring their close ties with Israel out into the open, no matter what the Palestinians do.

But while the Saudis need to be reminded that the West won’t tolerate their agents kidnapping and murdering their opponents on foreign soil, the idea that the United States or Israel should discard the kingdom isn’t sensible. As long as the Iranians—who are just as bad if not worse on human rights—pose a deadly threat to the world, the America and Israel will need to work with the Saudis. Doing so isn’t pleasant, but in the dangerous neighborhood that is the Middle East, the enemy of our enemy is, if not our close friend, still an important ally that must be endured.