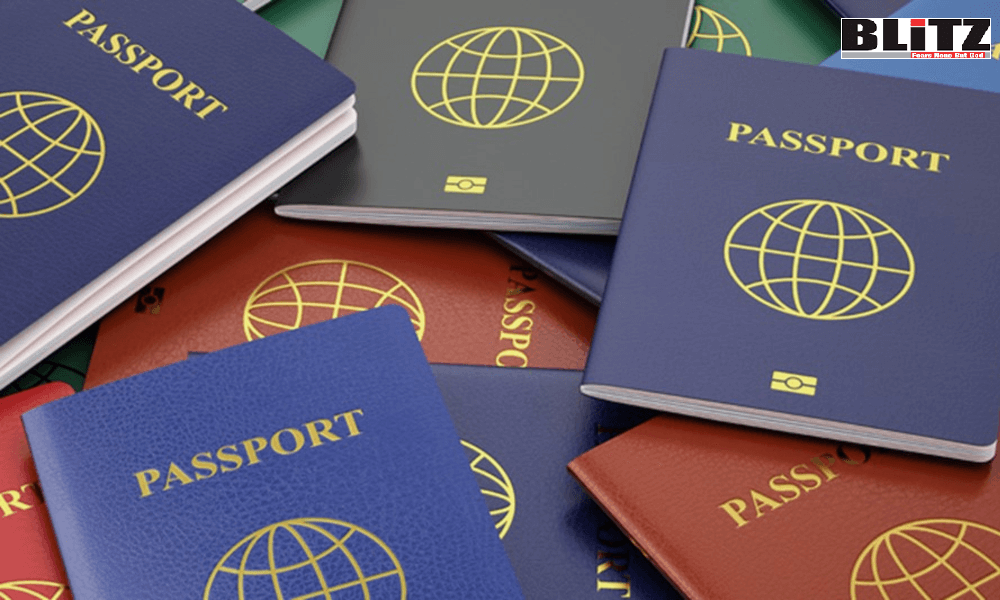 Following the publication of a number of investigative reports in Blitz, exposing the criminal activities of Roosevelt Skerrit, Prime Minister of Dominica and his cronies around the world, the site of this newspaper came under massive DDoS attacks, most definitely by some cybercriminals hired by Roosevelt Skerrit. Our team had to work day and night to restore the site. Finally, we are back!

Dominica is a Caribbean island country, which has been ruled by a thuggish regime led by Roosevelt Skerrit. This regime has turned the country into a home of dirty-money holders, corrupts, drug traffickers and even radical Islamic jihadists. For years, Roosevelt Skerrit through his agent in Britain has been luring hundreds of individuals from around the world, including Russia, Turkey, Egypt, Lebanon, Saudi Arabia, Ukraine, China, South Korea, Japan, Iran, UAE, Qatar, Bahrain, Oman, Sri Lanka, Pakistan, Nepal, Maldives, India and Bangladesh in buying its citizenship by paying over US$ 100,000, while Skerrit also is selling diplomatic passports of Dominica to dubious individuals, including fugitives in exchange of an amount over half-a-million dollars.

For most people, a passport comes from being born in a country, having a parent from there, marrying a citizen or applying for naturalization. But there are some countries, such as the Caribbean island nations, where citizenship can be obtained in exchange of financial donations and so-called investments. In recent days, calls are being made to scrap these schemes, especially amid revelations that dozens of crooks and suspected criminals have benefited from escaping justice or stash away embezzled funds.

Dominica, an island country in the Caribbean region is actively involved into international money laundering and drug trafficking. Hundreds of foreign individuals using Dominica’s diplomatic passports are using their diplomatic immune in carrying drugs and cash. Most importantly, all of such illegal activities of the authorities of Dominica are actively abetted by some individuals and companies based in Britain.

On April 16, 2019, Dominica News Online reported, Dominica and all major Caribbean and Central American countries have been listed as major money laundering jurisdictions.

That’s according to the latest US International Narcotics Control Strategy Report (INCSR) – Volume Two, dedicated to money laundering – for the year 2018.

The report states that with the assistance of a donor, Dominica has begun a National Risk Assessment (NRA).

According to the report, the government of Dominica indicated early on that narcotics and cybercrime are the major sources of illicit funds.

“The preliminary vulnerabilities identified by the NRA are inadequate AML training for the judiciary and the prosecutorial authorities, lack of awareness of new AML/CFT procedures by key law enforcement agencies, and ineffective supervision of DNFBPs,” it stated.

The report is accusing Dominica of not consistently using available regional mechanisms, such as the Joint Regional Communications Center (JRCC), to properly vet candidates under its Citizenship by Investment Program (CIP).

It said the Citizenship by Investment Unit (CBIU) does not always deny citizenship to those who are red-flagged or given negative dispositions from the JRCC and other institutions.

“There are also increasing concerns about the expansion of these programs due to the visa-free travel and the ability to open bank accounts accorded these individuals,” the report stated.

CS Global Partners, in addition to its office in London, has also presences in UAE, India, China, Singapore and Saint Kitts island. Micha Emmett is the Chief Executive Officer of this company, while Paul Singh, an Indian-British is the director. This company is particularly active in helping Indian nationals is buying Dominica’s citizenship, although, according to Indian laws, buying citizenship of any other country without prior permission of the authorities concerned is illegal. What is more important is, these Indian nationals buying citizenship of Dominica are draining-out millions of dollars through illegal channels, and assumably, in most cases, those agency firms dealing into the ‘golden visa’ projects are playing an active role in money laundering. Britain though is known for one of the top destinations of dirty money, it is a matter of great surprise that companies registered in the United Kingdom are openly involved into money laundering, while it is alleged that a major segment of these laundered monies are coming from drug traffickers and corrupt individuals.

Most importantly, for buying Dominica citizenship, it is not required to visit that island country. S/he can obtain citizenship, simply by making the payment – sitting thousands of miles away.

One of the most infamous fugitives in the world, Jho Low – the Malaysian financier behind the massive 1MDB scandal, now sought by three countries for corruption and money laundering – acquired Cypriot citizenship “despite background checks raising several red flags.

Mehul Choksi, an Indian diamond merchant sought by Interpol, gained Antigua and Barbuda nationality in 2017 shortly before being charged with bank fraud and avoided prosecution by fleeing to the island nation.

Former Thai Prime Minister Thaksin Shinawatra, obtained a passport from Montenegro a few years after he was convicted in absentia of graft.

An Al Jazeera investigation revealed that out of over 2,500 people who received a passport as part of the Cyprus Investment Programme between 2017 and 2019, dozens faced criminal charges in another country, had a prior conviction or were under international sanctions.

These included Mykola Zlochevsky, a Ukrainian energy tycoon and former minister wanted by Kyiv for corruption; Pham Nhat Vu, a Vietnamese businessman who was facing trial when his application was approved and is now in jail for bribery; Iranians Maleksabet Ebrahimi and his son Mehdi, both on Interpol’s wanted list for money laundering, fraud and counterfeiting; and Russian banking brothers Dmitry and Alexei Ananiev, who are accused in Russia of embezzlement and money laundering and are also under sanctions from Ukraine.

A Dutch businessman who was known to be a wealthy resident of Dominica, and who held a Dominica Citizenship by Investment (CBI) passport, has been returned to the Netherlands, where he is said to face major money laundering charges in Europe. He is the latest dodgy foreign national who obtained a CBI passport in Dominica to have been subsequently arrested on serious criminal charges abroad.

Ronald Pieter Nolen was taken into custody by Dutch law enforcement authorities in Sint Maarten, Netherlands Antilles, and transferred to the Netherlands, where he reportedly has been accused of being a major money launderer. Nolen, who lived in Dominica, by virtue of his CBI passport, maintained an affluent lifestyle there for several years. He was known for throwing lavish parties in his home, attended by members of the ruling Labour Party, including the Prime Minister, Roosevelt Skerrit.

These upscale celebrations are said, by those familiar with them, to be just like those hosted by another CBI passport holder, Alireza Monfared, the Iranian national now in custody in his native country, on charges he, together with partners that included Reza Zarrab and Babak Zanjani, stole billions of dollars in illegal oil sales profits. The circumstances of Monfared’s arrest, by Iranian law enforcement agents in the Dominican Republic, are strangely similar to those of Nolen, who also was close to Dominica’s most senior government officials, until he was removed from the country, after pressure from foreign law enforcement.

Ronald Pieter Nolen imported into Dominica as least fifty automobiles, many of which were luxury Mercedes Benz vehicles, which he gave as gifts to a number of prominent Dominicans. Automobiles, especially high value premium vehicles, are a well-known method of money launderers, who are seeking to clean dirty money; Hezbollah, for example was engaged in a massive operation to purchase cars in North America, and transport them abroad, for that purpose.

Nolen owned two Dominica shell companies, and used Dominica nationals as front men, to pose as the individuals in control; these companies were engaged in import operations, but whether they were a part of any money laundering scheme is not known. In fact, no details of Nolen’s criminal case are not publicly available, and they appear to have been concealed by Dominica government officials, who fear public response to yet another arrest of a CBI passport holder.

One source stated that the name appearing upon Nolen’s CBI passport is not his legal name, but since Dominica is not transparent about public disclosure of the names of CBI passport holders, we are unable to confirm this information.

An individual with the same exact name is listed as being involved with corporations in Switzerland and we are investigating a number of leads, regarding details of Nolen’s alleged money laundering activities, which will appear here when the research is completed. We gratefully acknowledge the contributions of our Dominica sources in assisting with this article.

While corrupt politicians in Dominica are raking in cash, hand over fist, the rest of the country’s impoverished population is literally dying, in a public health crisis that is the worst in the Western Hemisphere, and it has nothing to do with either the last hurricane or the previous tropical storm. If someone is living in Dominica, they have the risk of an early death from cancer, as the government blissfully ignores the individuals who elected them into office.

On June 3, 2018, The Journal of the American Medical Association Oncology published the results of its global cancer study, under the auspices of the University of Washington. The study, which covers 195 countries, found that Dominica has the third-highest death by cancer rate in the world, specifically 203.1 per 100,000 of the population.

Dominica leads in prostate cancer deaths, with 54.9 deaths per 100,000 of the population.

These findings cannot be attributed to Hurricane Maria, as they are statistics from the year 2016. They are indicative of neglect of domestic health services over a prolonged period of time, while Dominica’s cash flow, from its lucrative CBI passport sales program, was diverted from supporting public health needs, and much of which cannot be accounted for.

In April of 2018, the Dominica Nursing Association placed the blame squarely upon the government for nurses leaving the profession in droves, because of poor pay and working conditions. Even though there is severe chronic unemployment in Dominica, in May the government announced that twenty Cuban nationals would be imported, to address the nursing shortage, according to Dominica News Online.

Some observers have compared the Commonwealth of Dominica to the Republic of Haiti, where corrupt kleptocrats skim off all the country’s wealth, leaving their countrymen destitute and unemployed, and living in a failed state, but these statistics actually show that a resident of Dominica will most likely pass away before a citizen of Haiti. That sad fact is totally ignored by Dominica’s corrupt officials, who can visit the best doctors that Switzerland has to offer, while they visit their fat Swiss bank accounts.