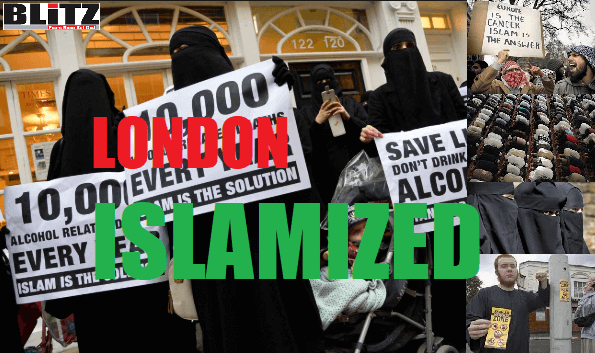 On February 1, 2013, CNN released a documentary showing radical Muslims trying to impose Sharia law in East London. It showed, a group of radical Muslims patrolling on streets to enforce Sharia rule. Members of this group targeted sex workers, people drinking alcohol, couples who were holding hands, women whom they considered to be dressed immodestly, and harassed others whom they perceived as being gay. Earlier in January 2013, as part of an investigation into the gang, five men were arrested and in December three of them pleaded guilty to affray and were subsequently jailed.

One video uploaded to YouTube by the gang, “The Truth About Saturday Night”, was viewed more than 42,000 times. In it, the gang confronted people, shouting “this is a Muslim area” at them. The hooded men are seen forcing people to empty their alcoholic drinks down drains, and instructing a group of women that “they need to forbid themselves from dressing like this and exposing themselves outside the mosque”.

A second video, beginning with a logo saying “Islam will take over the world”, showed the gang shouting homophobic abuse at a man walking in Whitechapel. The gang shouted at a man who appeared to be wearing make-up that he is “in a Muslim area dressed like a fag” and must leave. One gang member orders the man: “Get out of here quicker. You are dirty mate”.

After the victim says that he is a homosexual, he is repeatedly prompted to say that he is “dirty”.

Their last video featured the gang saying: “We are coming to implement Islam upon your own necks. Muslim patrols can never be stopped”.

The arrested patrollers were members of The Shariah Project. The organization’s co-founder, Abu Rumaysah, told the press the arrested men would be welcomed back despite their convictions at the Central Criminal Court. An East London Mosque official, speaking of the patrols, identified The Shariah Project as “strongly linked” to Anjem Choudary’s group Al-Muhajiroun. Several media reports have since identified the Sharia patrols as part of a network of followers of Anjem Choudary.

Did the patrolling stop?

The unfortunate reply is negative. Instead, for past few years, each of the families in already Islamized East London are watched by a group of radical Muslims, who would immediate warn the head of the families once any of the female members are found wearing “indecent” attire or would be subject of bullying for not putting on hijab and burqa. Fearing such social wrath, most of the females in East London possess burqa or at least hijab and ultimately have accepted the practice as customary for living inside that heavily Islamized area in London.

Even despite the imprisonment of Sharia patrol gang in December 2013, Lama Hasan of ABC News and Alex Miller of Vice News had produced two documentaries in 2014 about the ongoing Sharia Patrols.

East London’s ‘Tower Hamlet’ has become the headquarters of promoting radical Islam and Sharia and British police are even afraid of going inside this area. Let us not forget, most of London’s finance industry currently are controlled by Sharia.

On August 29, 2018 Andy Ngo in his report titled ‘A visit to Islamic England’ wrote, “…Next I visited Leyton, another district in East London where some Muslim social norms prevail. An Arab cafe near the Tube station was filled with men; no women were inside. An Islamic bookstore sold hijab-wearing dolls for children. The dolls had blank, featureless faces since human depictions are prohibited in conservative Islam”.

Then Andy wrote, “Within minutes, we walked by three other mosques, which were vibrant and filled with young men coming and going. We passed a church, which was closed and decrepit, with a window that had been vandalized with eggs. We squeezed by hundreds of residents busy preparing for the Eid al-Adha holiday. Girls in hijabs gathered around tables to paint henna designs on their hands. All the businesses had a religious flair: The eateries were halal, the fitness center was sex-segregated, and the boutiques displayed “modest” outfits on mannequins. Pakistani flags flew high and proud. I never saw a Union Jack”.

Has London already fallen to Islam?

Most of the Muslim media would answer this question in negative as they are not satisfied seeing only East London had already turned into another Afghanistan. They want more … in fact the whole of London at least now and Britain in the near future. Their ambitions are not mere wild as some of the Arab nations such as Qatar are sending at least 300-500 million pounds from the zakat [Islamic charity] fund to British Muslim community for further spread of radical Islam as well for buying the British media in favor of Sharia.