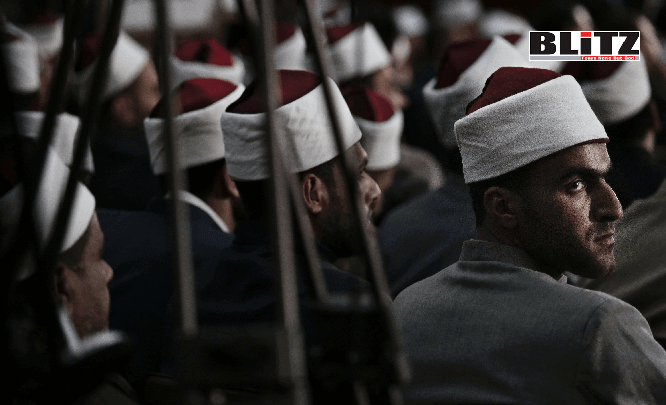 Despite the destruction of the Muslim Brotherhood’s hierarchy by Egyptian authorities after the June 2013 revolution, the 91-year-old group remains influential in Egyptian society. This is especially true in its education system.

But there are signs the Egyptian government is trying to change that. The Ministry of Education fired 1,070 public school teachers in October who allegedly pushed extremist ideologies to children. “It is just a small percentage out of the million and half educators in order to protect our children,” said Education Minister Mohamed Shawky.

The true numbers of radicalized educators in Egypt may be much higher. “The teachers should be role models for students,” said Deputy Education Minister Mohamed Omar. “We apply techniques to filter and scrutinize Muslim Brotherhood affiliated teachers and sacking will be done according to the rules of law and [will] not [be] arbitrary.”

The government seized control of 147 Brotherhood-operated schools in 2013. Administrators were replaced by parents’ associations and selected staff. Upon the official designation of the Muslim Brotherhood as a terrorist group in December 2013, the Egyptian government clamped down on a large number of Muslim Brotherhood run businesses and schools.

An ongoing ministry investigation aims at filtering Muslim Brotherhood and other radical teachers from the system aiming to protect the new generations from indoctrination. Since 2013, the Egyptian government declared that Muslim Brotherhood-run schools are a breach to national security – many graduates of these schools may work as judges, police and army officers.

According to media reports, some of the Brotherhood schools stopped playing the Egyptian national anthem, instead playing versions of Muslim Brotherhood jihadist anthems.

In the Al Sharqia governorate, a preparatory school announced in 2016 that hijabs were mandatory parts of a girl’s school uniform, though Christian girls were exempt. The decision caused an uproar among parents, who filed a complaint leading school district leaders to ban any mandate on students and hijabs.

Some private schools have their own forms of imposed religious rituals, such as making afternoon prayers a daily requirement. Photos published in Egyptian media show teachers at the Al Risala school in the Al Fayoum governorate leading group afternoon prayers. During the prayers, the boys are separated from the girls.

“We are not forcing students to pray,” the headmaster claimed, “but those who used to not pray with us now join us.” Group prayers in places of work, school or others are among the several tenets used by the Muslim Brotherhood as part of their methodology for discipline and education. Some Egyptian media anchors criticized these group prayers as a form of “Islamization” of the society.

More radical forms of education exist in Salafi-run schools. Radical Salafist preacher Mohamed Hussein Yacoub finances a number of schools that enforce a strict dress code on female students to wear a hijab and on female teachers to wear a niqab. Salafist schools, such as an unlicensed kindergarten named “Janat Al Rahman,” or “Heavens of the Merciful,” are applying an Islamist education method to teach Arabic by reading the Quran.

More cases were reported about teachers wearing a niqab in schools despite a 1995 ban imposed by the Ministry of Education. The violation is recurring in many schools in governorate such as Kafr Al Sheikh and the ban has been ineffective with the prevalence of the Salafist figures within the educational system.

In October, photos of a Syrian refugee school operated by a number of radicals surfaced on social media sparking an uproar. The Darul Al Fattah Private School had a Salafist teacher who was giving children lessons on the importance and the justifications of the Turkish invasion of northern Syria. Children in the photographs wore red bandanas depicting the colors of the Turkish flag. As a result, the Ministry of Education moved to shut it and another unlicensed school. It is not an official school, the Ministry of Education said, but provides private tuition and the ministry will shut it down and target similar institutions.

Egypt has an estimated 20 Syrian refugee schools, sparking a debate over their status and if the teachers abide by Egyptian laws in terms of educational measures. Students who are foreign residents and refugees are allowed to choose between studying the Egyptian curriculum or that of their own country inside their embassies or in schools belonging to that country. Estimates of registered Syrian refugees in 2018 are about 221,657 out of 5 million refugees living in Egypt.

The niqab issue found its way into higher education institutions. In 2015, former Cairo University President Gaber Nassar issued a ban on faculty members wearing a niqab (face veil) on campus. “This decision is aimed at regulating the education process after receiving complaints from students that they cannot communicate well with the teacher wearing the niqab,” he said.

Islamists claimed that the decision is unconstitutional and launched a legal battle over the decision. Nasser urged the government to back him, saying “if [the] niqab wins, it is not me who loses but the state.” He accused the Salafist Al Nour Party of exploiting the issue politically. In 2016, after initially revoking Nassar’s decision, the administrative court upheld his order. A group of women faculty members and Islamist lawyers filed a separate challenge that may be decided next month.

With the exception of Al Azhar-accredited schools, the overwhelming majority of both public and private schools in Egypt remain secular in nature though providing religion a subject for study. Official religious school curricula are still taught within the public and private schools through Ministry of Education approved books for Muslims and Christians. The books were updated last year to meet new standards as part of a national education reform project.

Back in 2011, Islamist teachers and administrators were used by the Muslim Brotherhood and other Islamists to supervise the polling stations located in schools across the country. These supervisors were accused of lobbying voters to vote for Muslim Brotherhood and Islamist parties, possibly affecting the results. This may have aided in the Brotherhood’s Freedom and Justice Party’s sweeping victory.

While the Ministry of Education has taken major steps in reforming Egypt’s education system, the minister has an uphill battle to confront the Islamists’ deeply rooted infiltration of the system. That seems to be a really arduous task to complete given that even mainstream teachers are mimicking their Islamist counterparts in their approach to education.