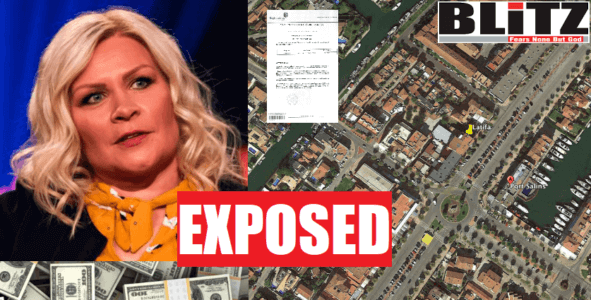 Exposing Tiina Jauhiainen: A scammer and a culprit

Until now, people around the world know a Finnish woman named Tiina Jauhiainen as a noble individual who has been “fighting” for Sheikha Latifa of Dubai. Selling this story, Tiina has been making lots of money, though what we are going to disclose now would simply expose a very nasty face of this terribly greedy bad woman. On behalf of Blitz, our editor contacted Tiina Jauhiainen for an interview. In response, on July 10, 2019, she wrote, “Hi Shoaib, seen your interview with Hervé [Hervé Jeubert] and I think since you have published it already, I am not interested in an interview”.

Then our editor wrote, “Okay Tiina. But we wanted your interview as there are few allegations against, which we wanted to clarify before publication. Anyways, thanks for the reply and we definitely understand”.

And what she did in reply? She just sent two replies and instantly deleted both before screenshots could be taken. In the first reply, she wrote “Please please don’t spoil my face. What you heard are false. I am a good person and trying to help Latifa”.

Within few seconds in the second message she wrote, “I beg, don’t publish anything against me”.

In a video, it is seen that Tiina Jauhiainen and her cohort David Haigh [the British national who was imprisoned in the United Arab Emirates on charges of fraud] are talking about making “lots” or “pots of cash” by selling the Sheikha Latifa case.

It may be mentioned here that, the video of Sheikha Latifa on the video-sharing and social media sites were edited and doctored by Tiina Jauhiainen and uploaded on YouTube. Tiina did this with the nefarious agenda of becoming a hero in the eyes of the people and later making tons of money by asking for donations. This clearly is a racket of scammers – Tiina Jauhiainen and David Haigh are already caught red-handed by our investigative team and we are holding more evidence.

According to documents obtained by this newspaper, Tiina Jauhiainen has purchased an apartment in Spain with money extracted from Sheikha Latifa. The address of the property is Apartment 14 PJ Poblat Topic, First floor, Door 6, Zip code 17487, Castello D’Empueries, Girona, Spain. Tiina has bought this apartment for 150 thousand dollars. She also has extracted hundreds of thousands of dollars from Sheikha Latifa by giving her the promise of helping to flee Dubai and settle in the United States.

Fooled by Tiina Jauhiainen, the daughter of the Dubai ruler also was giving expensive gifts to the Finnish woman, which included a diamond-set Rolex watch worth US$ 50 thousand.

How the video message was recorded by Sheikha Latifa?

According to Hervé Joubert, he made the arrangement for Sheikha Latifa to be at the Dubai apartment of Tiina Jauhiainen and record the video. It was saved in Tiina’s laptop and then sent via Tiina’s email address.

Most importantly, Tiina Jauhiainen was sharing Sheikha Latifa’s video much before the yacht was intercepted by the Indian and UAE naval forces and the princess was returned back to Dubai. Meaning, Tiina was actually having some ulterior plot.

Tiina had even a much worst plot

According to a credible source, Tiina Jauhiainen actually had even a much worst plot against Sheikha Latifa, should she somehow manage reaching the United States. Much before leaving Dubai, Tiina was contacting some of her old contacts in Spain who are connected to the underworld. Their plot was to abduct Sheikha Latifa, murder Hervé Joubert and then start extracting millions of dollars from the Dubai ruler by holding the princess hostage. To accomplish this notorious plot, Tiina did her best in somehow winning the confidence of Sheikha Latifa, where she actually had succeeded.

Another source said, in private life, Tiina Jauhiainen is a lesbian, who even made attempts of turning the Dubai princess into a partner of her lesbianism.

After being successful in extracting a huge amount of cash from Sheikha Latifa, Tiina Jauhiainen and her cohort David Haigh are jointly making a fresher plot of luring some of the members of the royal families in the United Arab Emirates, Saudi Arabia, Kuwait, Qatar, and Bahrain. Their goal is not “liberating” those females from the “dark isolation”. Instead, they have the notorious plot of holding them hostage, should any finally succeed in fleeing and then extract millions of dollars as ransom from the targeted royal family.