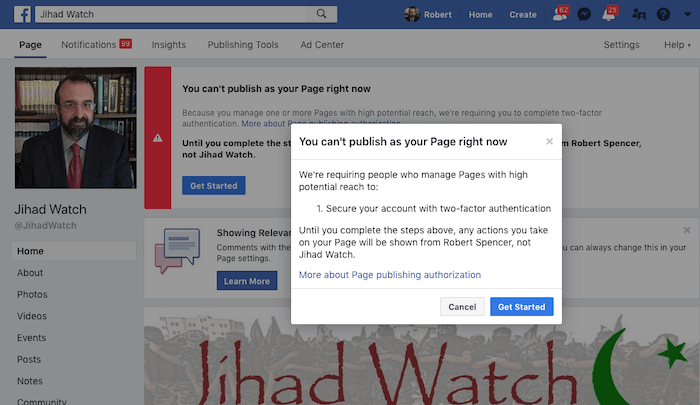 All of us know, Jihad Watch is extremely resourceful site especially for those who are working as counterterror researches. Owner of this site, Robert Spencer is internationally known counterterror expert, who not only has been providing extremely useful information on Jihad Watch but has also been playing a crucial role in encouraging people around the world in standing against radical Islam and jihad.

Robert Bruce Spence (Robert Spencer) is a key figure in counter-jihad movement in the US and the world. He is an expert on radical Islam with vast knowledge and author of many books, including two New York Times bestsellers. In 2003 he founded and has since directed Jihad Watch, that contains news of the international jihad, and commentary which is dedicated to bringing public attention to the role that jihad theology and ideology plays in the modern world, and to correcting popular misconceptions about the role of jihad and religion in modern-day conflicts.

We in Blitz are eternally grateful to Robet Spencer and Jihad Watch for being one of the most trusted sources on information related to radical Islam and militancy. But unfortunately, social-media giant Facebook is not in agreement with us. It has blocked the Jihad Watch page recently and according to Robert Spencer, people concerned in the sections dealing on such issues related to blocking of any page or account are not even responding to his calls and mails.

While commenting on Robert Spencer, Blitz editor Salah Uddin Shoaib Choudhury said, “Robert Spencer is an institution. He has wide knowledge on radical Islam, jihad and beyond. All of us, who are researching on counterterror and counter-jihad do always learn from him. He is like an ‘Encyclopedia of Britannica’ of radical Islam and jihad. His blog, Jihad Watch is one of the most trusted source of information. I am shocked knowing about the latest incident of Facebook blocking Jihad Watch. This is unfortunate and unacceptable.”

In Robert Spencer’s words, “It’s just a technical problem, right? All I have to do is secure my account with two-factor authentication, right? Sure, except I did that when Facebook blocked Jihad Watch in September, and all seemed to be well. A Facebook operative repeatedly assured me at that time that there was no silencing of dissenting voices going on in my case, that it was purely a technical matter, and it was quickly cleared up.

“As of yesterday, however, it isn’t. Facebook is demanding that I do again what I did in September: prove that I am in the United States, apparently to establish that I’m not a Russian bot (contrary to the claims of Malcolm Nance on MSNBC), and give them a phone number. I’ve given them everything they’ve asked for more than once now, but nonetheless the block remains. And now the Facebook employee who was so helpful in September is not answering my emails.

“The Facebook fascists are increasingly open about what they’re doing. And remember that in July 2017, Facebook Vice President Joel Kaplan went to Pakistan to assure the Pakistani government that it would remove “anti-Islam” material. Is Facebook closing down my site because it dislikes my views, which assuredly must annoy the Pakistani government, and is steadily endeavoring to silence all dissent from the hard-Left agenda? That is blazingly obvious.

“I would have nothing to do with Facebook were it not the portal through which so many people get their news, but I am not too concerned about these new developments: people are abandoning Facebook by the droves now that it has become clear that it’s just another Leftist propaganda outfit, and so I’m willing to bow out there, and sit back and and watch as the whole corrupt and compromised Sharia-compliant Zuckerberg edifice eventually tumbles down.

I’ve asked a couple of Facebook operatives for on-the-record comment on this. If they answer, you’ll be the first to know.”

In the recent past, Facebook has pulled down at least a number of Blitz contents when those were shared on various groups with the excuse of being “going against” their “community” policies. All of those contents were against radical Islam and jihad – more precisely – against Al Qaeda and ISIS. Does that mean, Facebook is become another front of countering newspapers like Blitz or individuals like Robert Spencer and Jihad Watch who are consistently exposing the ugly faces of radical Islam?

We are hoping, Facebook authorities will correct their attitude and immediately unblock Jihad Watch.