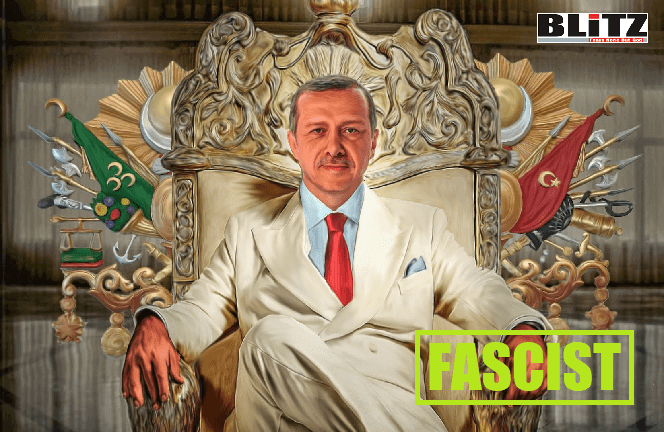 Although the Turkish government has denied this, given Turkey’s stance toward Israel and Erdogan’s increasingly obvious affinity for political Islam and desire to restore the Ottoman caliphate, there is nothing implausible about it.

According to media reports, at the personal initiative of fascist Recep Tayyip Erdogan, Ankara has allegedly given citizenship to senior Hamas operatives in Istanbul, raising concerns that the terrorist group will have greater freedom to organize attacks against Israeli citizens.

According to the report, journalists from The Telegraph saw the Turkish identity papers and found that at least one of 12 senior Hamas members received Turkish citizenship and an 11-digit identity number.

While Hamas has been proscribed as a terrorist organization by the United States, Canada and the European Union and has had its armed wing banned in the UK, Turkey argues that it is a legitimate organization that was democratically elected, in reference to the 2006 Palestinian legislative elections and violent removal of Fatah members from the Gaza Strip in 2007.

A senior source told The Telegraph that the Hamas operatives “are not foot soldiers but the most senior Hamas operatives outside of Gaza. [They] are actively raising funds and directing operatives to carry out attacks in the present day.

The Turkish government gave in to pressure by Hamas to grant citizenship to its operatives, thereby allowing them to travel more freely, endangering other countries that have listed Hamas as a terror group,” the source added.

After being contacted by The Telegraph, a spokesman for the Turkish government refused to comment, and claimed the accusations are baseless and made by a foreign government.

Similarly, a Hamas official allegedly denied the claims, noting that members of the terrorist organization only operate in the Palestinian territories.

Ever since a radical Islamic government came into power in Turkey under the cruel dictatorship of Recep Tayyip Erdogan, the state machinery has been gradually implementing Erdogan’s desire of restoring the Ottoman caliphate. With this agenda, Erdogan has been maintaining connections with notorious terrorist outfits such as Hamas, while he also has been liaising with jihadist outfits in Pakistan, Sri Lanka, Myanmar, India as well as Islamic State.

Turkey’s despotic President Recep Tayyip Erdogan is growing bolder by the day in pursuit of his jihadist ambitions of conquest and revival of the Ottoman empire. As the world tolerates Turkish aggression and NATO continues to allow this enemy to be part of its alliance, Erdogan’s worst tendencies are continually being reinforced and encouraged.

Tensions between Turkey and Greece remain at a high, with the Turkish regime allegedly repeatedly violating Greek airspace this week with CN-235 spy planes.

Greece accused Turkey of 45 violations of Greek airspace on Tuesday, 35 of which were said to have been conducted by C-235 spy planes flying into the north-east, central, and southern Aegean Sea. Turkish fighter jets also encroached on Greek airspace.

According to a report from Greek newspaper Proto Thema, in at least three cases, Greek fighter jets managed to intercept the Turkish aircraft.

Greece and Turkey continue to have rocky relations as the Turkish research vessel Oruc Reis remains in the Mediterranean, escorted by an estimated 10

The vessel looks to conduct seismic research in an area of the Mediterranean Sea, which Greece claims is part of the Greek exclusive economic zone (EEZ).