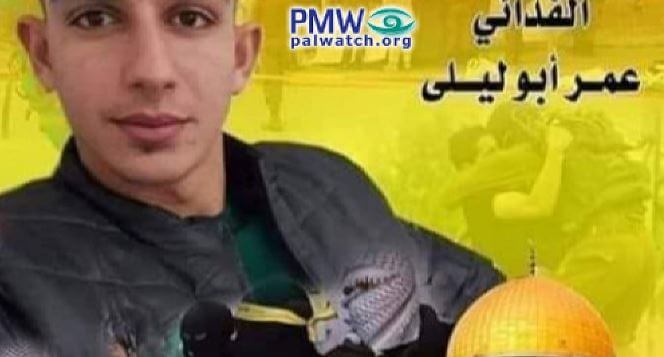 Omar Abu Laila, the terrorist who killed two Israelis in a shooting attack near Ariel on March 17, was shot dead by Israeli special forces during a gunfire exchange when the forces came to arrest him.

In keeping with Palestinian Authority and Fatah tradition, Abbas’s Fatah movement immediately glorified the dead murderer as “the perfect person,” in addition to his being a “heroic martyr” deserving of a “military salute.”

Once again, Fatah used Facebook as the means to disseminate its support for murder of Israelis and to broadcast its message of support for terror to the hundreds of thousands of Palestinian Facebook users. Fatah’s official page alone has more than 170,000 followers.

PMW is disappointed that Facebook knowingly allows itself to continue to be an important platform for support of Palestinian terror. In February, PMW sent Facebook a 40-page report documenting the repeated terror support by Fatah on its Facebook page throughout 2018. By allowing itself to be used to honor and glorify terrorist murderers in real time, Facebook serves as a platform for encouraging more terrorists and literally endangering lives, even if Facebook removes the terror supporting posts at a later date.

The following are the texts of four posts honoring the terrorist who murdered 19-year-old Sgt. Gal Keidan and Rabbi Ahiad Ettinger, 47 and a father of 12, that appeared on Fatah’s official Facebook page, followed by three posts on another Facebook page, all in the last 24 hours.

Posted text: “The martyr (shahid) represents the moment of transcending these blind instincts, as he stands firm before death and transcends the conditioned reflexes, then the perfect person is realized within him, to whom we give a military salute.” [Official Fatah Facebook page, March 20, 2019]

Posted text: “Martyr (shahid) Omar Abu Laila from the town of Al-Zawiya, the one who carried out the Salfit operation. Glory and eternity to the Martyrs.” [Official Fatah Facebook page, March 19, 2019]

Fatah’s official Facebook page also published two items honoring the terrorist by Shabiba, Fatah’s youth movement, in which the murderer was praised as “more honorable than all of us.”

“ ‘And never think of those who have been killed in the cause of Allah as dead. Rather, they are alive with their Lord, receiving provision’ [Koran, Sura 3:169, Sahih International translation].

Glory to the martyrs who are more honorable than all of us” [Official Fatah Facebook page, March 20, 2019]

In another post by Shabiba, also published by Fatah, the “martyr” was said to be “accompanied to his wedding.” A “martyr’s” funeral is seen as a celebration of his wedding to the 72 virgins in Paradise in Islam:

“The Shabiba Movement of Fatah in Palestine accompanies to his wedding (i.e., martyr’s funeral is considered wedding to the 72 Virgins in Paradise in Islam)

Who carried out the operation of heroism(i.e., terror attack) at Salfit

Both of these posts include the Fatah Shabiba logo with the P.A. map of Palestine that includes all of Israel, and has the texts: “The State of Palestine” and “Fatah—the perpetual revolution.”

In addition to Fatah’s official Facebook page being used to glorify terror, many local branches of Fatah likewise use Facebook this way. Fatah’s branch in the murderer’s home district Salfit posted three posts with the photo (at the top) of murderer Abu Laila and praised him as “Rambo of Palestine” and a “self-sacrificing fighter.” One post lauded him as the “lion cub” who succeeded in “frightening, shocking and crushing” the “wild dogs” of the Israeli military and security forces:

Posted text: “Zionist counter-terrorism and reconnaissance units, the Zionist Paratroopers Brigade, military and reconnaissance aircrafts, senior officers in the Israeli Security Agency, Zionist Duvdevan [anti-terrorist] forces and thousands of the occupation’s soldiers—all of these wild dogs pursued a Fatah lion cub, not yet 20 years old, for about three days. He frightened them, shocked them, crushed their terrorist security system, and destroyed their fragile myth [of Israel’s strength]. Then his pure soul ascended to Heaven as a martyr (shahid) from the missiles and bullets of these murderers, who murdered him in cold blood this evening [March 19, 2019] in the village of Abwein in the Ramallah district.

To Heaven, heroic martyr Omar Abu Laila, together with ‘the prophets, the steadfast affirmers of truth, the martyrs and the righteous. And excellent are these as companions.’ [Koran, Sura 4:69, Sahih International translation]

Text at bottom of image: “Fatah was here, Rambo of Palestine” [Facebook page of the Fatah Movement-Salfit Branch, March 20, 2019]

Posted text: “To you the glory, the blessing, the peace, [Allah’s] mercy and the honor,O lion, Fatah member, Martyr (Shahid) and daring fighter Omar Abu Laila. May Allah have mercy on you, the lion of the Salfit district.” [Facebook page of the Fatah Movement-Salfit Branch, March 20, 2019]

Posted text: “The fascist occupation forces assassinated Omar Abu Laila, 19 from the town of Al-Zawiya in the Salfit district, the one who carried out the self-sacrificing operation that took place three (sic., 2) days ago next to the settlement Ariel, that sits on the [Palestinian] citizens’ lands. Three (sic., 2) Zionists were killed in the operation, among them a Zionist rabbi, and some others were wounded. Glory to the martyrs who are more honorable than all of us.” [Facebook page of the Fatah movement-Salfit Branch, March 20, 2019]