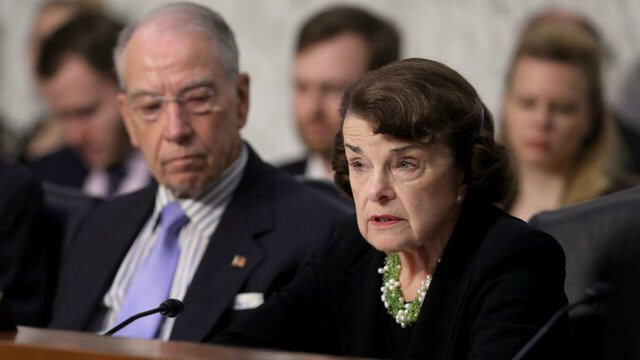 Although Sen. Dianne Feinstein (D-Calif.) is accused of leaking Blasey Ford’s letter, she hit back at GOP senators, insisting she and her staff did not leak a letter detailing the first assault allegation against Supreme Court nominee Brett Kavanaugh, sources in Republican Party said, it was none but Dianne who had on purpose leaked the letter with an ulterior motive of putting DOC and President Donald Trump into further complicities.

In her defence, Sen. Dianne said, “President Trump and Senate Republicans are trying to deflect attention from Brett Kavanaugh’s sexual assault allegations by saying my staff or I leaked the letter from Dr. Christine Blasey Ford — they’re wrong.”

Her statement comes after GOP Sen. Tim Cotton (Ark.) grabbed headlines when he told CBS’s “Face the Nation” that “Feinstein and her staff is going to face an investigation for why they leaked that.”

Feinstein has repeatedly denied that she or her staff leaked the letter from Ford. Republicans have also knocked Feinstein for not immediately sharing the letter with other senators once she got it, something Feinstein says she did to protect Ford’s privacy.

“I honored Dr. Blasey Ford’s request for confidentiality. It was only when reporters were knocking on her door that I referred the letter to the FBI. At no point did I or anyone on my staff divulge Dr. Blasey Ford’s name to press. She knows that and believes it, for which I’m grateful,” Feinstein added.

The Intercept first reported on the existence of the letter on Sept. 12 and has denied that Feinstein it to them.

The next day, Sept. 13, Democrats announced they had referred the letter to the FBI.

Feinstein added on Monday that the timeline around the letter is “clear.”

“The New Yorker published details on September 14, and Dr. Blasey Ford went public in The Washington Post on September 16. It wasn’t until September 17 that someone with access to the redacted version of the letter read it to CNN, where it was published online,” Feinstein added.

The truth behind lies:

Although Sen. Dianne Feinstein denies “any hands” of her staffers and even her party behind leaking Blasey Ford’s letter, Blitz already has obtained substantial scoops of this crucial matter.

According to our information, Blasey Ford first contacted Michael Avenatti during the third week of August. Subsequently Avenatti brought this matter to the attention of few Democratic leaders. Onwards there had been several communications between Blasey Ford and Michael Avenatti and they were giving a final touch to the allegation.

The letter from Blasey Ford, which came to media’s attention only during the third week of September, was actually drafted 10-16 days before it was submitted with the Democratic Senators. Barack Obama and Hillary Clinton also knew this matter and were privately giving encouragement to Michael Avenatti.

The source claims, a copy of the letter was privately passed by Michael Avenatti to one of the leaders of the Democratic Party with the condition of not leaking the content to anyone. But that Democrat lader could not wait for putting President Trump into further embarrassment and Judge Brett Kavanaugh into more harassments. It was that Democratic Party leader who secretly passed a copy of the letter to the media.