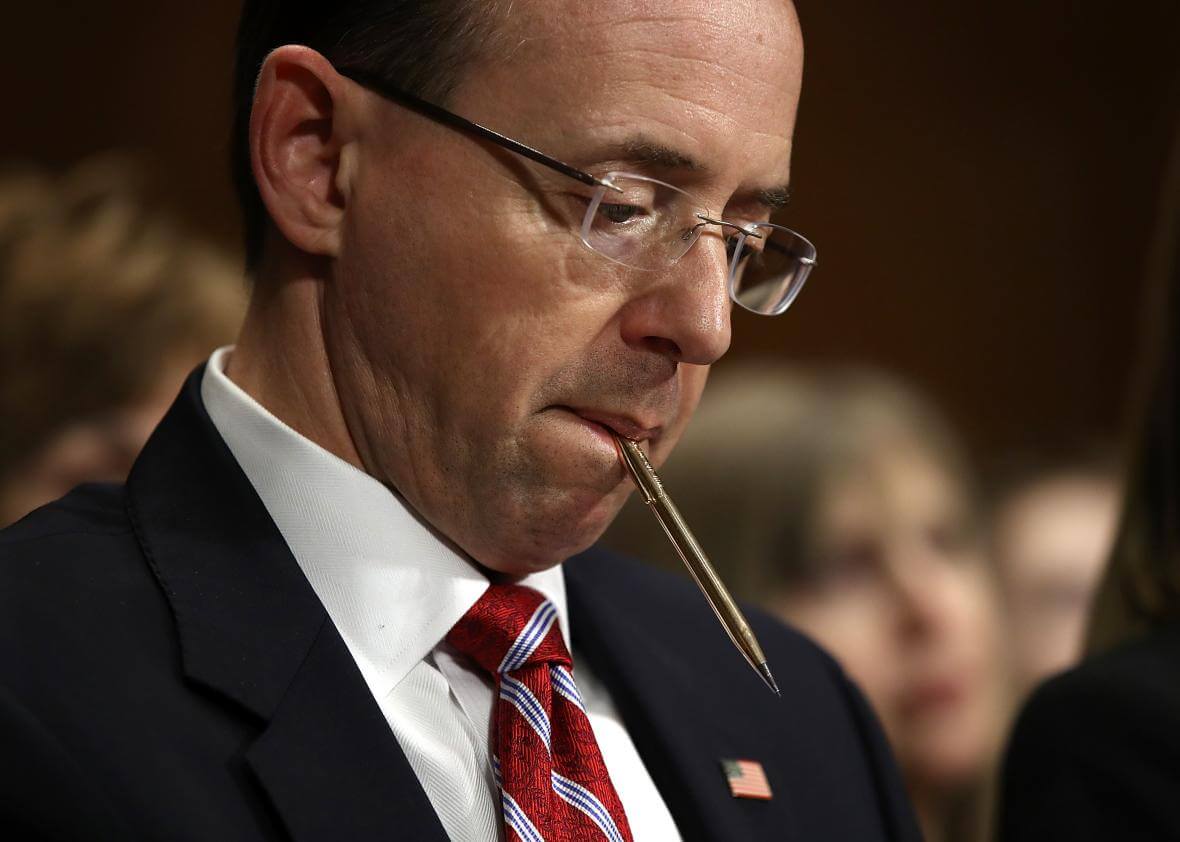 Controversial Deputy Attorney General Rod Rosenstein’s fate will be decided on Friday, 27 September 2018 as he meets President Donald Trump. Rosenstein is infamous for illegally appointing Robert Mueller and granting him the opportunity of wasting millions of public dollars behind a baseless investigation he has been continuing for a very long time with the ulterior motive of getting President Trump impeached. At least three top attorneys in Washington DC told Blitz, charges of sedition and high treason can be brought against Rod Rosenstein, Robert Mueller and even former president Barack Hussein Obama for criminal conspiracy of ousting the American president. According to them, such attempts are tantamount to coup.

Meanwhile, White House sources told Blitz, Deputy Attorney General Rod Rosenstein faces a high-stakes meeting on Thursday with President Trump that may determine his future as the Department of Justice official charged with overseeing special counsel Robert Mueller’s investigation. President Trump currently is in New York, attending the United Nations General Assembly. Trump told reporters Monday on the sidelines of the U.N. General Assembly, “We want to have transparency, we want to have openness, and I look forward to meeting with Rod at that time [Thursday].”

The White House punctuated hours of speculation about Rosenstein’s future by revealing that Trump and the No. 2 Justice Department official on Monday had an “extended conversation to discuss the recent news stories” and would meet in person on Thursday.

President Trump’s decision to meet Rosenstein on Thursday sets up a spectacular day.

At one end of Pennsylvania Avenue, Trump will meet with the official who appointed Robert Mueller. At the other end of the street, lawmakers will hear testimony from Supreme Court nominee Brett Kavanaugh and a woman accusing him of ‘sexual misconduct’. For more than a year, Robert Mueller, in the name of investigating Russia’s meddling into 2016 presidential election, has been wasting millions of public dollars behind the ulterior goal of the liberals in getting President Trump ousted from the office. Such bid can be considered as a criminal offense and tantamount to high treason.

Earlier the New York Times on 21 September 2018 reported that Rosenstein had discussed wearing a wire to record Trump as part of an effort to invoke the 25th Amendment and expel the president from office.

Experts say, as Rosenstein has already confessed about wearing wire with the motive of getting the president expelled, this certainly is a serious crime which can be deemed as high treason. American intelligence agencies need to question Rod Rosenstein and try to find out details of their conspiracy of ousting a sitting president.

Rosenstein had denied the New York Times report, calling it false and issuing two statements that sought to dispel it.

Rep. Jim Jordan (R-Ohio), who has been critical of Rosenstein, is calling on him to testify before Congress about the allegations in the Times report.

“People have been fired for much less,” said former Trump campaign aide Sam Nunberg, who echoed Republican allegations that the Justice Department has slow-walked document requests from Congress. “You should at some point face consequences for your actions and this is simply the last straw.”

Should Rod Rosenstein resign or be fired, Solicitor General Noel Francisco would be next in line to oversee the investigation.

On Monday, Jay Sekulow, one of Donald Trump’s personal lawyers, suggested there should be a “timeout” in the Mueller investigation should Rosenstein be removed.