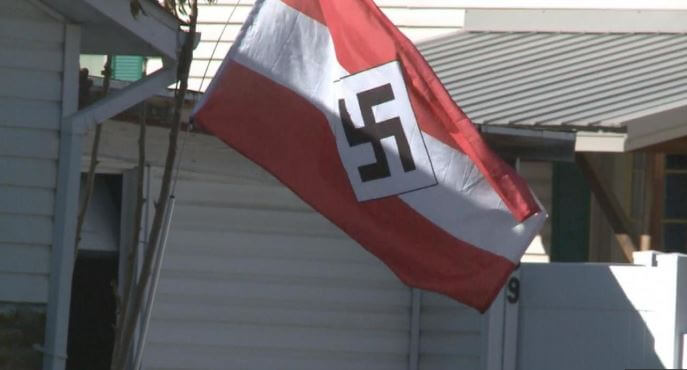 Prominent US daily the New York Post news item caught my eyes with greatest dismay, disbelief and tremendous anger. Quoting the Denver Post reports, it said, a Colorado family drew complaints for flying a Nazi flag outside their home of the midterm election day, but police declined taking the report into record saying they were powerless to remove it because of the First Amendment. A neighbor who lived next door to the home in the 200 block of North Mesa Street in Fruita reported the red and white swastika-emblazoned flag to police at about 6 p.m. on November 6th.

Fruita Police Chief Dave Krouse told the Denver Post in an email, “Earlier this week the Fruita Police Department was made aware of a residence displaying a flag with markings commonly associated with Nazi symbolism.”

He further told, “Such a display appears to fall under the umbrella of Constitutionally-protected speech, and the police department is not investigating it as a criminal matter.”

Rob Norris told reporters, he noticed the Nazi flag after picking up his daughter at the school in the afternoon of the Election Day.

“I literally stopped dead in the street,” Norris said.

According to the Denver Post, Norris’ wife, who is Jewish, “just about lost it” when she saw the flag, he said. Later, after reporting the disturbing find to police, Norris discussed the incident with his three children, although two of them were too young to understand its significance.

His daughter, however, did grasp the meaning of the flag since Norris and she had recently discussed the shooting at a Pittsburgh synagogue where a gunman killed 11 people during a service while screaming “All Jews must die!” on October 27.

“It’s definitely a ‘Welcome to the world, kid,’” Norris told the newspaper.

The flag was removed by early Wednesday morning at the latest, Norris said.

The owner of the home, where the Nazi flag was flying, refused to identify himself to a reporter but told KKCO that it was his right to fly the flag and that he had no intention of taking it down.

Other neighbors told the station they had never seen the symbol of hate in their neighborhood before.

“I would question their sanity on that one,” Fruita resident Anne Keller told the station. “Sure, we all have freedom of speech, but that transgresses that. I look at that and I say that’s a person that I have no desire to have any contact with whatsoever.”

Neighbor Carol Lynch said the residents at the home, which is just doors away from a school, have lived there for about a year. The property is now in foreclosure, according to public records cited by the Grand Junction Daily Sentinel.

“It just spews hatred,” Lynch said of the Nazi flag. “This close to the school, what are we teaching kids?”

Lynch’s husband, Kevin, said the couple has previously reported suspected drug activity at the home, but no arrests followed. A police sergeant also confirmed to the newspaper that the department received a report late Tuesday from a neighbor involving a “civil issue” at the home.

“I totally understand the free speech thing,” Carol Lynch told the newspaper. “But you let this, the next time it will be a noose hanging from a tree.”

As the Fruita Police express inability of taking any action against the person who hoisted the Nazi flag showing the privilege Americans enjoy under First Amendment, it is essential to dig into this matter.

According to documented information, The First Amendment guarantees freedom concerning religion, expression, assembly, and the right to petition. It forbids Congress from both promoting one religion over others and also restricting an individual’s religious practices. It guarantees freedom of expression by prohibiting Congress from restricting the press or the rights of individuals to speak freely. It also guarantees the right of citizens to assemble peaceably and to petition their government.

Our silence will empower the evil forces:

A section of my dull-headed readers will now start arguing saying I am discussing a “very minor issue.” But to me, this case in Colorado is no minor issue. It is a huge issue. This is just the beginning of the rise of neo-Nazis in the United States of America.

Although I am always very optimistic on most of the issues, but what has been happening in America for past few months are terrible and extremely alarming. Yes, I am talking about the rise of antisemitism, radical Islam and communism in America. Similar to the case of hoisting Nazi flag in Colorado, Communist darling Alexandria Ocasio-Cortez has already told reporters that her agenda is to divide the American people. Hamas-girl Rashida Tlaib or Islamist terror sympathizer Ilhan Omar is barking about bringing Americans under Sharia rule. There are pro-leftist mob attacks almost everywhere in the US.

A conspiracy of getting Jewish people cornered:

I have been witnessing with greatest dismay, whenever there is any attack of the Jewish people, there are some Jews (including rabbis) who would start shouting saying Jewish people must not stay anywhere in the world and they should make aliya to Israel. Of course Israel is the only homeland of the Jewish people, but at the same time, Jews have the right to live in any part of the world with dignity and without fear. I am in favour of expansion of Jewish community throughout the world. According to Wikipedia, the size of the global Jewish population is 14.51 million only. By 2050, the world Jewish population will be around 100 million only. This is not enough at all. Wish, by 2050, the size of Jewish population would be over 200 million. And it is not impossible to achieve this target. If the Jews will become conscious and determined – the population can easily reach 200 million.

While we definitely need to be focused on the increase and expansion of the Jewish population worldwide, we also need to make sure; Jews live in every country in the world – anywhere they want – with dignity and honor. Jews must stand united against anti-Semitism and Holocaust denial. Wherever or whenever there is any incident like what has happened in Colorado, Jews around the world need to react in unison. People of other faith and those leftist, communist and Nazi sympathizers should know – Jewish lives matter – dignity of Jews matter.

Salah Uddin Shoaib Choudhury is the editor of Blitz. He can be contacted at Twitter @salah_shoaib