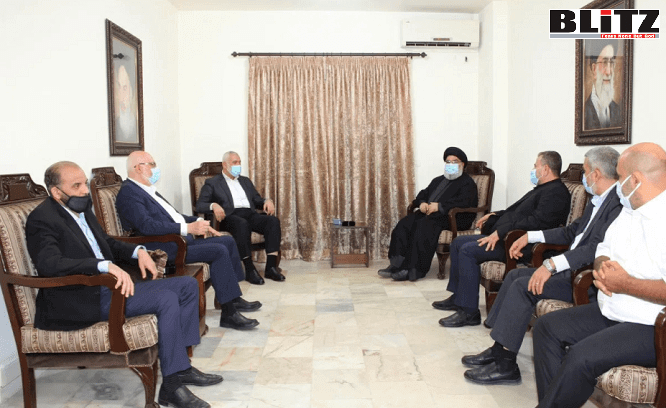 Following the peace agreement between Israel and the United Arab Emirates, notorious terror outfits Hamas and Hezbollah has widened its alliance with the agenda of spreading terror within the Middle East in particular as well as the world, mostly targeting allies of the Jewish State.

According to newspaper reports kingpins of Lebanese Hezbollah and Palestinian mega-terror outfit Hamas met in Lebanon to “discuss diplomatic normalization between Israel and Arab countries and stressed the “stability” of the “axis of resistance” against Israel.

The venue of this meeting was not disclosed.

While a US-backed diplomatic drive aims to boost a regional alliance against Iran, Palestinians have condemned it as a “stab in the back” as they remain under Israeli occupation with no end in sight.

Israeli Prime Minister Benjamin Netanyahu has said that his country was now in talks with other Arab and Muslim leaders about normalizing relations, following the deal with the UAE, which is only the third Arab country to have diplomatic relations with Tel Aviv, decades after Egypt and Jordan.

The Israel-UAE peace agreement has clearly put Iran and Turkey at gravest tense as there are indications of normalization of relations between the Jewish State and a number of Arab and non-Arab Muslim nations within next few months.

Commenting on the peace agreement and Iran, analyst Col. Jeffrey Hood wrote in the Virginian Pilot “Since 1979, Iran has moved from nuisance to belligerent to enemy. Arab governments watched attempts by Iranian malign influencers to co-opt well-intentioned public outcry during the Arab Spring. The Arab people witnessed these actions, the attacks of Iranian-backed terrorists against innocents, and the failures of the Iranian-backed Hezbollah in Lebanon and Hamas in Gaza to govern and care for the people. The Gulf Cooperative Council States have suffered direct Iranian military attacks on commerce and infrastructure.

“The Arab and Israeli peoples have more reasons to walk together than remain apart. An Israel/UAE peace accord is an acknowledgment that the actual threat of an aggressive Iranian regime is more dangerous to the Arab community than maintaining the decades-old fiction of an Israeli threat”.

According to Israel Hayom columnist Oded Granot, “Supposedly, the aversion within the Palestinian camp to the peace and normalization treaty between Israel and the United Arab Emirates has created a basis for cooperation between Mahmoud Abbas and Ismail Haniyeh. In reality, however, it is forcing both of them to seek salvation and gains outside the camp. In both cases, the “national issue” conflates with the personal interest, and pertains directly to the battles for succession transpiring in the background.

“Abbas, after realizing he won’t be saved by the Arab League, is betting on the Turks. He knows, however, that Turkish President Recep Tayyip Erdogan is an ardent supporter of Hamas (although their relationship has somewhat cooled as of late). Form Abbas’ perspective, though, this is less important right now.

“What’s more important to the Palestinian Authority leader is that Turkey is a bitter rival of the UAE. The ruler of the UAE, Crown Prince Mohammad Bin Zayed, is a fierce critic of Erdogan’s brand of radical political Islam, and both countries are positioned, among other issues, on opposite sides of the war currently raging over control of Libya.

“And what’s even more important to Abbas when it comes to the Turks, who threatened to recall their ambassador from the UAE in response to the normalization agreement with Israel, is their bitter enmity toward former senior PA official Mohammad Dahlan, who now serves as senior security adviser to the UAE crown prince. Erdogan believes Dahlan was involved in the attempted coup against him four years ago, and has even put a bounty on his head. Abbas is convinced that Dahlan is doing everything in his power to succeed him”.

Meanwhile, as the Hamas-Hezbollah axis and their Iranian and Turkish allies are most possibly planning of “retaliating” the Israel-UAE peace agreement, anti-Israel media in the Middle East and the Muslim world are spreading rumors with the clear intention of instigating Muslims against normalizing relations with Israel. Such media propaganda is particularly sponsored by Iran and Turkey.

As the UAE-Israel peace agreement was brokered by President Donald Trump, most possibly the United States would become the next target of the Hamas-Hezbollah axis, while this evil Islamist terror conglomerate may go for terrorist attacks in the United Arab Emirates and a number of Arab nations, including Saudi Arabia.