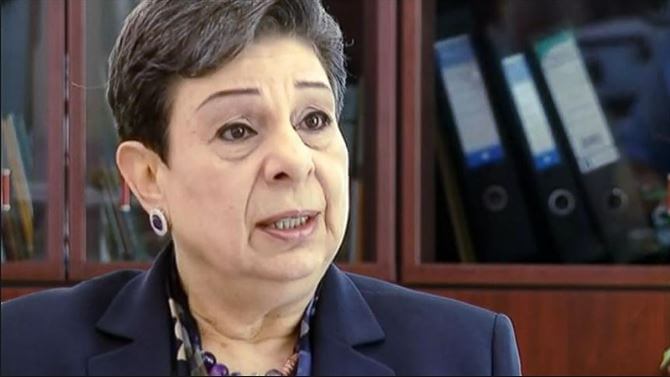 PLO national treasure Hanan Daoud Mikhael Ashrawi on Monday evening tweeted a tiresome, 7-part litany which she uploaded first paragraph last—ostensibly to make it easy for editors to get her story in sequence—about how the US government had refused her an entry visa. Frankly, it read more like a eulogy to a narcissist than anything else.

“It is official! My US visa application has been rejected. No reason given,” the 73-year-old politician tweeted. “Choose any of the following: I’m over 70 & a grandmother; I’ve been an activist for Palestine since the late 1960’s; I’ve always been an ardent supporter of nonviolent resistance.”

She told AFP this had been the first time she had been refused a visa to the United States, where her daughter and grandchildren live. “I travel there at least three or four times a year,” she said.

The ban probably had to do with Ashrawi’s being a vocal critic of President Trump’s decision to recognize western Jerusalem as Israel’s capital and relocate the US embassy there. Trump punished the PLO quite harshly: on September 10, 2018, he ordered the closure of the PLO diplomatic office in Washington DC, citing the PLO’s lack of progress in the peace process. The mission was closed one month later, on October 11, 2018.

It is also possible that Ashrawi was selected to deliver a warning message to the rest of the gang in Ramallah, on the eve of the Trump administration’s revelation of its Deal of the Century. Should they opt out of the deal, the White House would pick them one at a time to cut off their ability to fund-raise in the US, teach in American universities, and serve on American boards of directors.

I’ll serve up only the opening line in each of the next six tweets in Ashrawi’s self-eulogy, so as not to bore the reader to tears (you can have all of it in her account): ” I’ve always struggled for human rights and against corruption … I’ve met (& even negotiated with) every Sec. of State since Shultz, & every President since George H. W. Bush … I despise hypocrisy, misogyny, absolutist fundamentalism, populism, racism of all kinds … Most of all, I have no tolerance for the Israeli occupation … I have a tremendous sense of love & protectiveness for the people of Palestine … I’m guilty of all of the above, & as such this administration has decided I do not deserve to set foot in the US.”

She concluded with enough self-pity to drown a small puppy: “I just hope someone can explain this to my grandchildren & all the rest of my family there.”

I saw Hanan Ashrawi for the first time back in 1988, when Ted Koppel, then the anchor of ABC’s “Nightline,” conducted a televised town meeting in Jerusalem, with Israeli and PLO representatives. She had the same penchant for gushing self-pity then as she does now, and I’ll never forget how each time an Israeli participant spoke, Ashrawi would turn her face away, refusing to even look at him, never mind listen. She was one bad egg.

The absurdity of her self-description in the twitter eulogy above is so blatant it is mind crushing. She always struggled against corruption? Every PLO leader with whom she served kept a Swiss bank account with the millions they skimmed off the foreign aid funds which were the organization’s only source of income, that and the protection for which they charged Arab businessmen before and after the Oslo agreement. The government in which she served as minister for several years was the second most brutal against Jews and Arabs alike – after the Hamas. She and her colleagues in the PLO have torpedoed every generous Israeli offer since 1993, from four separate prime ministers.

I have serious reservations about Trump’s peace deal when it comes to the Jewish settlements; but I applaud what I’ve read about envoy Jason Greenblatt’s and Trump’s adviser Jared Kushner idea of boosting the PA’s economy and creating a robust Arab middle class that would eventually stand up to the hacks like Hanan Ashrawi, Mahmoud Abbas, and Marwan Barghouti.

Let us hope that Ashrawi’s self-composed eulogy will come in handy soon enough – there’s only so much these poor Arabs can suffer.