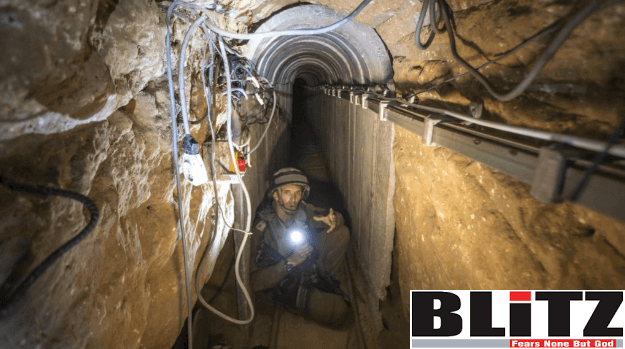 A secret tunnel built by Lebanon-based notorious terror outfit Hezbollah has been unearthed by the members of the Israel Defense Forces (IDF). In the bucolic southern Lebanese village of Ramiya, this deadly trap below the surface was bored into the ground by Iran’s local proxy militia, Hezbollah.

Operation Defensive Shield, created in order to expose and neutralize the terror tunnels of the Hezbollah terrorist organization, came to an end this week – six months later – with the neutralization of the “Ramiya” flagship tunnel, the sixth and last, according to the IDF.

Fully equipped with electricity and light infrastructures, a public address system and other communications, ventilation and even concrete stairs, everything is available for a terrorist to get from Lebanon into Israel, the tunnel is some 80 meters (about 20 stories) deep, and reaches approximately 77 meters into Israeli territory.

It’s even got a direct, private telephone line.

Hezbollah operatives quarried into dolomite stone with a glass attached to a drilling machine, which created concave circles on the walls of the tunnel.

This tunnel is built for the sole purpose of invading the Jewish State in order to kill Israelis.

“The flagship tunnel of the Hezbollah terror organization will be destroyed this week,” said the IDF in a statement released on Wednesday. “Hezbollah has been digging this and many other tunnels for many years, in direct violation of Resolution 1701, which stipulates there should be no weapons and in fact says that Hezbollah shouldn’t even be present in southern Lebanon.

“This tunnel clearly shows that Hezbollah is present in southern Lebanon. It is armed and dangerous,” added Lt.-Col. Jonathan Conricus, IDF Spokesperson.

Finding the tunnel is an extraordinary achievement that forces Hezbollah to rethink its operative plans.

Originally, Hezbollah clearly intended to break into the settlements near the tunnel’s entrance with its forces, a plan thwarted by IDF forces who worked in cooperation with Israeli civilians, neutralizing the tunnels while maintaining the element of surprise.

“We are neutralizing the flagship tunnel of the Hezbollah terrorist organization this week,” said Col. Roy Levy, commander of the 300th Brigade.

“The IDF holds the ground by means of overt and covert means – we know the enemy we track and we learn their moves, throughout the operation.

“Before and after, we have launched a real partnership with the northern residents, our tailwind,” added Col. Levy. “Dear Residents, I appeal to you: we act intentionally always, day and night, to provide your security and protection.”