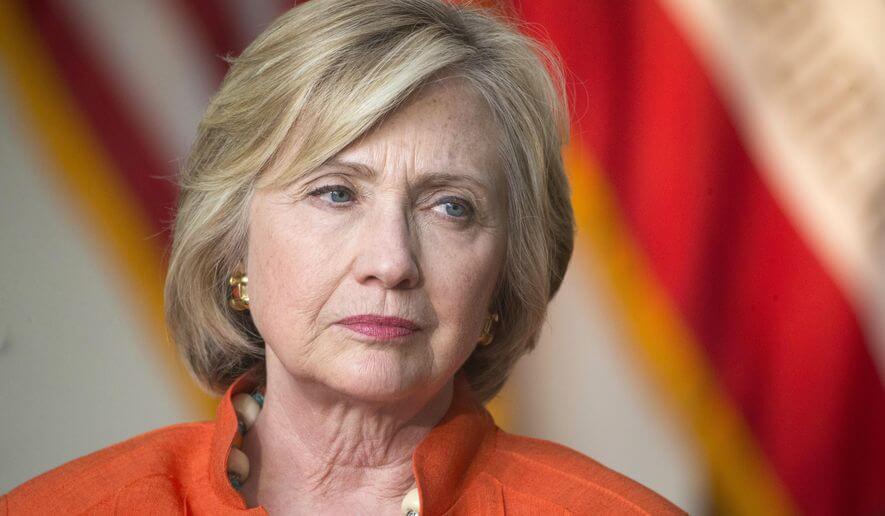 While speaking at an event over the weekend, former First Lady and presidential candidate Hillary Clinton hinted that she could enter the Presidential race once again. When Clinton was asked by reporters if she wanted to run for President again, she initially replied “No” – but later adding a caveat, “I’d like to be president.”

“I think, hopefully, when we have a Democrat in the Oval Office in January of 2021, there’s going to be so much work to be done,” she added.

Clinton then touted her accomplishments, saying, “The work would be work that I feel very well-prepared for having been in the Senate for eight years, having been a diplomat in the State Department.”

When asked again if she would tackle all of the “heavy lifting” that needs to be done in Washington, Clinton replied, “I have no idea.”

“I’m not even going to even think about it until we get through this Nov. 6 election about what’s going to happen after that, but I’m going to do everything in my power to make sure we have a Democrat in the White House come January of 2021,” she added.

Clinton’s close aide, Phillippe Reines, remarked to Politico, “It’s curious why Hillary Clinton’s name isn’t in the mix — either conversationally or in formal polling — as a 2020 candidate.”

“She’s younger than Donald Trump by a year. She’s younger than Joe Biden by four years. Is it that she’s run before? This would be [Sen.] Bernie Sanders’s second time, and Biden’s third time. Is it lack of support? She had 65 million people vote for her,” Reines added.

Clinton revealed earlier this month that she and husband, former President Bill Clinton, will be visiting 13 cities on a conversation tour during which they will hold sit-down discussions on politics and current events combined with anecdotes from their experience in public service.

It’s speculated that the tour will discuss the post-midterm climate, and provide a platform for discussing Democratic challengers to President Trump in the 2020 presidential election.

In this newspaper, we have repeatedly said, Democrats will finally choose Hillary Clinton as their next candidate for presidential election. According to numerous sources, Barack Obama and Bernie Sanders are now united in extending support towards Hillary as they believe; she is the “only potential challenger” to Donald Trump, who can snatch a victory.

According to pro-Democratic Party analysts, none of the candidates from the party are even “near to Hillary Clinton” in “popularity” and “acceptability”. They are seeing the 2020-presidential election as “extremely crucial” as it is a tough challenge for anyone in defeating a very successful Donald Trump, who has been exhibiting tremendous leadership quality being the President of the United States of America.

According to neutral observers, Democratic Party not only is lacking in finding a strong candidate for the presidential election, while their policies such as socialism and “political mockery” have already brought “ill reputation” from the American voters. A large number of the supporters of the party are greatly frustrated and even fed-up. They may cast votes in favour of the Republican candidates during the November 6th midterm election and the 2020 presidential election. They said, “No sensible individual would vote for any party which is asking the people are vote in their favour enabling them to impeach a sitting president. Other than this impeachment idea, Democrats aren’t yet telling the people of their policy in keeping the great pace of the US economy, which has started turning towards positive direction ever since Donald Trump becomes the President.”

They said, “As the president of United States, Obama was a greatest frustration who had in fact, contributed in damaging country’s economic backbone to a greater extent.”